The Yggdrasil Master Program has thrown up some great slots in recent years, and the newest title to be delivered is Winfall in Paradise. The game is available at all top slot site... Read Full Review 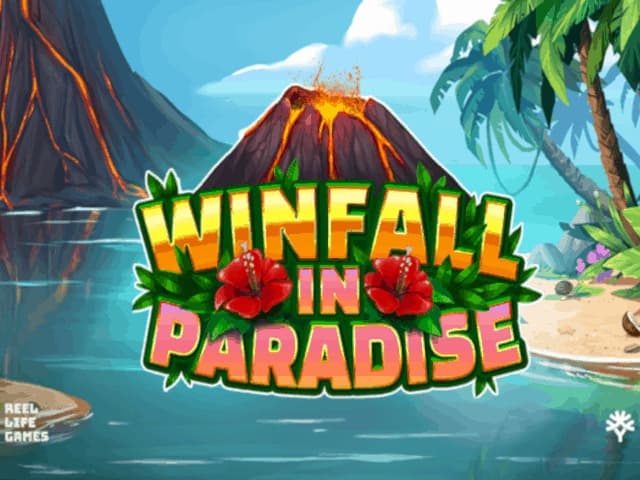 The Yggdrasil Master Program has thrown up some great slots in recent years, and the newest title to be delivered is Winfall in Paradise. The game is available at all top slot sites that offer Yggdrasil slots - most of which offer great slot bonuses too.

Winfall in Paradise invites you to step away from your 9-5 and visit a beautiful tropical island. Of course, it also offers some best bonus features and some winning potential. Is it worth a visit, though? Let’s take a more detailed look into this Winfall in Paradise slot review and find out.

At first sight, it would be fair to say that the design of the slot is not the most exciting. While it is definitely colorful, this is the least you would expect from a slot based around a tropical island. The game does spring to life when you manage to land some bonus features, though, with a bombardment of animations and cool visuals hitting the screen. There is a volcano in the background which threatens to erupt during the base game and comes to life when the bonuses are triggered, making for some excitement. It must also be said, though, that the soundtrack is very relaxing and definitely gets you in the mood for a sun-soaked holiday.

How to Play Winfall in Paradise Online Slot?

The gameplay of the slot is kept nice and simple. The game features 20 paylines across a 5x3 grid, which is standard for most top online slots. When playing the Winfall in Paradise slots for real money, the minimum you can wager is $0.20, while the maximum is $50, which should cover a good range of budgets. To the left-hand side of the reels, there is a chance wheel and a volcano item displaying a cash prize. These are both essential for the bonus games.

The game has been fully optimized for use on various devices. The Winfall in Paradise mobile slot version is near identical to the desktop game. The colorful backdrop of the game looks great on smaller screens, and it runs smoothly for free or for real money on most top mobile browsers.

The slot really comes to life with the bonus features. The main bonus feature is a Bonus Wheel, which can reward one of, or a combination of three different features. These are the Win it Again Volcano, The Wind Modifier, and The Wave Modifier.

The Wave Modifier adds between 2 and 20 Wilds to your reels, the Wind Modifier chooses a random symbol, then replaces all symbols of a lower value than that with that symbol, and the Win it Again Volcano awards the previously volcano cash prize to 20x your stake. Whenever a win that is higher than this is triggered, the Volcano Prize will increase to that.

The other main feature is the Free Spins Round. To trigger this, players need to land three or more of the turtle symbols in the game. When this happens, players will get seven free spins. These can be retriggered during the round. If you fail to win on any spin in the Free Spins Round, then you will still be rewarded with a win that matches your total stake amount.

The maximum win that can be secured in the game is a solid 19,880x your stake. The game is highly volatile, and it has been given an RTP of 96.20%, which is around the average you would find in most top online slots.

On the face of it, Winfall in Paradise looks like a fairly generic slot, but once you trigger the bonus rounds, you realize that there is plenty on offer here. The possibility of combining the features with the help of the bonus wheel can lead to some really exciting gameplay and top payouts to match. The maximum payout may not be as big as some titles, but we found we were still able to score some big wins here once the bonuses started rolling in. Find the Winfall in Paradise slot in our top Pennsylvania online casino sites and the best New Jersey online casinos.

Who developed the Winfall in Paradise slot?

The slot was developed by Reel Life Games as part of the Yggdrasil Master Program. This provides smaller developers with a chance to showcase their work under the Yggdrasil umbrella.

Are there any free spins in the Winfall in Paradise slot game?

Yes! The slot has a Free Spins Round which is triggered by landing three or more of the Golden Turtle Scatter symbols.

What is the RTP of the Winfall in Paradise slot?

The slot has an RTP of 96.20%, which is slightly higher than the industry average.

Is there a Buy Bonus feature in the Winfall in Paradise slot?

Yes! If you want to skip the queues, you can do by buying your way into the bonus rounds using the Buy Bonus feature.

What is the best bonus in the Winfall in Paradise slot?

The best bonus here is the Bonus Wheel, as it gives you a chance to get your hands on a combination of other bonuses. You can see the likelihood of landing it on the bonus wheel icon on the left-hand side of the screen.

What is the highest paying symbol in the Winfall in Paradise slot game?

The highest paying symbol is the game logo, which pays out 20x for a combo of five and also acts as the game’s Wild symbol.

Can I play the Winfall in Paradise slot on my mobile?

Of course! The game has been fully optimized to work on a range of mobile devices, including those on both Android and iOS operating systems.

Is Winfall in Paradise a good online slot?

Absolutely! With a range of bonus features and a great maximum payout, there is plenty to enjoy with the Winfall in Paradise slot.

What is the maximum I can win in the Winfall in Paradise slot?

The maximum amount that can be won when playing this slot is 19,880x your stake, which is a very generous payout.

Can I play the Winfall in Paradise slot for free?

Yes, you can. The demo version of the Winfall in Paradise slot is available to play for free.