It’s fair to say that voodoo-themed slots are not for everyone, so they’re kind of a rarity in slot games industry. After all, not every slot fan wants to be tied to ... Read Review 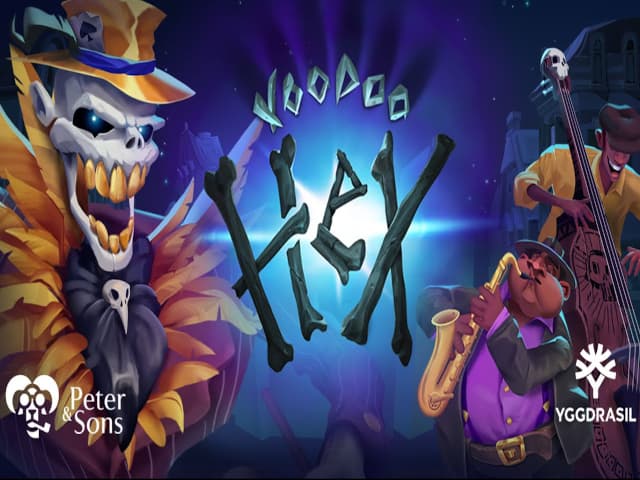 It’s fair to say that voodoo-themed slots are not for everyone, so they’re kind of a rarity in slot games industry. After all, not every slot fan wants to be tied to voodoo dark magic in any way, even in a game. But if you ask us, that’s exactly what makes them so fun. Developers are channeling that dark magic into fantastic features that makes voodoo-themed slot games such as Voodoo Hex a hit in our opinion.

Developed by the now famous duo of Peter & Sons and Yggdrasil Gaming, it’s pretty clear what Voodoo Hex is all about. You’re playing to break the hex (curse) and unbind yourself from the dark magic into the reels. The specs show that it’s a medium to highly volatile slot with only 5 paylines. But don’t worry about the number of betways – the magic makes it work.

The slot can pay almost as high as 10,000x the bet to the luckiest players. If you’re into a bit of terrifying slots that come packed with features despite the low number of paylines and smaller grid, Voodoo Hex is a brilliant idea.

First things first – Voodoo Hex is not your classic slot machine. It has a 3x3 grid with only 5 paylines, which might make it sound like we’re talking about a vintage slot machine. It’s anything but, although it looks that way. Peter & Sons is a studio renowned for its unique graphics, and its team’s prowess is on full display. This is a dark, yet revealing slot game with amazing graphics, probably set in a spooky alley in New Orleans. We especially like the tiny details like the red-eyed cat in the lower right corner.

The 3x3 grid is populated by voodoo cards of all kinds. Some show card royals which pay less. Others show shady voodoo characters that pay up to 5x for three. The Wild is some kind of potion we’d rather not drink.

On top of the graphics, the studio has some great audio attached to the action. It’s a bit spooky and dark-ish, just like befits a voodoo-themed slot game.

Voodoo Hex is a modern slot developed on the HTML5 platform. Like most new slots, the Voodoo Hex slot can be played on the go in any Yggdrasil slots casino from your mobile browser, no download is required.

The action begins as soon as you place a bet. Bets go from $0.10 to $50 per spin, so you can set them to what you prefer. The 3x3 grid makes the gameplay pretty simple. Only combinations of three matching symbols pay, with premiums offering up to 5x wins. Wilds can step in to complete winning combos, and double the highest-paying premium in terms of payouts. Coins can also land rarely on the reels, paying up to 100x if you’re lucky.

That’s not the only action in the base game. What kind of voodoo-themed slot will this be without a bit of dark magic? When you fill two reels with the same symbol type, they will trigger the Mystery Stacks Respins feature, turning all instances of those symbols into Mystery Symbols, which will then turn to matching symbols per spin as they move down the reels with each spin. Every respin also increases the Progressive Multiplier, going up by +1 per respin and boosting your wins.

Landing the Skull with Golden Teeth in the center of the grid awards the Bonus Round. You can get 5, 7, 9, or 11 spins – the number is determined randomly. The Bonus Round plays just like the base game except you’re not paying for the spins. Respins are also available, with the Progressive Multiplier not resetting on losing spins.

If you don’t want to wait for the bonus trigger, the Bonus Buy feature will trigger it instantly. It costs 110x for 15 free spins or 70x for a random number.

The Voodoo Hex slot RTP is set to 96.00%, which is perfect for a slot of medium variance. With a bit of luck and a sky-high multiplier, you can win up to 9,800x the bet across the 5 paylines.

Voodoo Hex might look like a simple slot, but that couldn’t be further from the truth. It’s a dark magic bonanza with plenty of surprises that you’ll end up loving. The uncapped magical multiplier is one of them in the Bonus Round, but Mystery Stacks Respins can keep your win streak going as early as the base game.

It’s no case of bad bajuju at all, so unless you’re terrified of any spells, you should give this fun slot a try at the best online slot sites in Pennsylvania online casinos and New Jersey online slot sites.

Who developed the Voodoo Hex slot?

The Voodoo Hex slot was developed by Peter & Sons for Yggdrasil’s platform. Peter & Sons established itself as one of the best Yggdrasil satellites. It is known for its high-quality if a bit cartoonish graphics and exciting gameplay features in all of its slots.

No, the volatility is more medium than high. With that being said, you should be extra careful with your wagers. This is still a punishing slot that can destroy your bankroll if you’re not paying attention. Start slow and build a bit of momentum up before risking bigger wagers.

Can I play the Voodoo Hex slot on my phone?

Yes, you can. It was developed on the HTML5 platform, so it’s available to play on the go straight from mobile browsers. It works perfectly on any Android and iOS device, so you don’t need the latest devices to spin its dark magic reels.

Should I download anything to play it on the go?

Nope, and that’s the best part about it. The Voodoo Hex slot is available straight from mobile browsers. No need to download any app or software to play it on the go. Just open it from a browser and spin the reels whenever you like.

Is there a Free Spins Round in the Voodoo Hex slot?

Yes, there is a Free Spins Round available in the Voodoo Hex slot. It is triggered unusually by a single Scatter in the center of the grid. You get a random number of free spins between 5 and 11. Retriggered are possible, and there’s a Bonus Buy feature too for those who don’t want to wait.

How does the multiplier work in the Voodoo Hex slot game?

The Progressive Multiplier keeps rising during the Respins Round and the Free Spins Round too. In the base game, it resets on losing spins, which is omitted in the bonus. Since there is no cap on how high it can get, this is the premier feature in the Voodoo Hex slot.

What symbols are there on the Voodoo Hex slot reels?

The name makes it pretty obvious what the symbols might be. There are four voodoo characters on the reels that pay up to 5x, followed by cards representing card royals. A magical potion is the Wild, while the Skull with Golden Teeth is the Scatter.

Is there a promo code for the Voodoo Hex slot?

We don’t have a promo code for the Voodoo Hex slot as of now. But that doesn’t mean there won’t be one later. Check our website regularly in the promotions section. There will be plenty of bonus codes to get, and there might be one for Voodoo Hex as well.

With the uncapped multiplier and a bit of luck, the slot can pay up to 9,800x the bet. This is dangerously close to 10,000x, which is a pretty solid winning potential for a medium volatile slot. Of course, we’re not saying it’s easy to hit, but still.

When was the Voodoo Hex slot released?