Norse mythology is a huge inspiration for slot developers, especially Yggdrasil. The studio’s name is named after the Norse tree of life, so it makes perfect sense that Yggdrasil Gaming is so ... Read Review 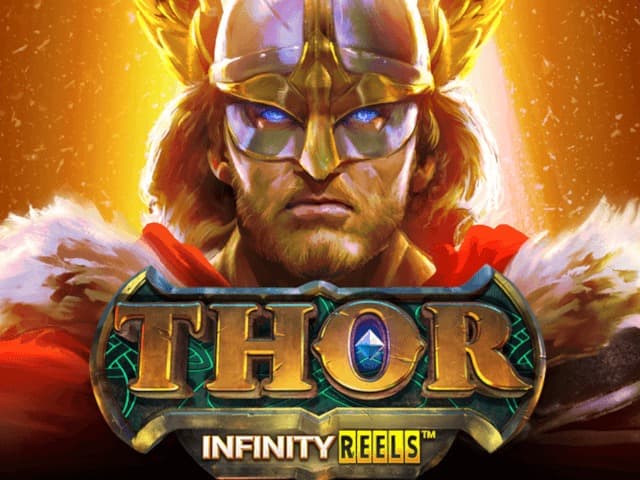 Norse mythology is a huge inspiration for slot developers, especially Yggdrasil. The studio’s name is named after the Norse tree of life, so it makes perfect sense that Yggdrasil Gaming is so focused on Thor, Odin, and the other Norse deities. The Maltese game developer is known for its Vikings slot series, but its new slot outclasses them all. Named Thor Infinity Reels, the new Norse mythology slot game from Yggdrasil is an electrifying adventure with the God of Thunder himself.

Created by Reel Play for the YG Masters platform, the slot puts you on a voyage to Asgard. As the name suggests, it’s yet another slot built on the Infinity Reels engine, so get read for more reels to the right. The God of Thunder himself plays a significant role in this slot, wielding the all-powerful hammer Mjolnir to deliver electrifying wins.

The Thor Infinity Reels slot isn’t big on paylines. It initially starts with a 4x3 reel set, but with each win, the number of paylines increases.

Yggdrasil Gaming is known as a developer of visually impressive slot games and Thor Infinity Reels is no exception. The slot game looks pretty sharp and is set against a Norse battlefield with slain soldiers and trickles of snow falling from the sky. It’s obvious that Thor went through here with his might hammer. Another indicator for a big battle is the war-drum epic soundtrack which sets the tone just right.

The symbols include axes, shields, Thor himself, and Mjolnir in a few incarnations. The hammer symbols are of particular importance since they can come with bonus values attached. All symbols pay from left to right except hammer combinations that include 5 or more of these symbols.
Release Date:
29/03/2021
Reels:
3
Rows:
4
Autoplay Option:

Yggdrasil Gaming is fully focused on mobile slots at the best New Jersey online casinos and top Pennsylvania online casinos. You can enjoy the action in the Thor Infinity Reels online slot on your Android and iOS devices without the need to download it.

How to Play the Thor Infinity Reels Slot Game

Before you start the journey, you will need to set your wager first. You can choose between 0.20 and 40.00 credits. Set what suits your wagers and hit the Spin button while you cross your fingers for an infinite number of paylines.

For every win in the base game, you will get an extra reel to the right. As soon as the reel is added a respin follows, with a new one as long as there are winning symbols. Each win adds another reel to infinity and does the same for the progressive multiplier. When your winning streak stops, the reels reset to the 4x3 grid.

The symbol multiplier is applied to all symbol wins except the Hammer. In the beginning, the multiplier starts at x1 but improves by +1 for every new reel added to the right. Just like the Infinity Reels, there’s no upper limit imposed on the multiplier. If you’re lucky enough to add 12 reels to the grid, you will trigger a payout of 888x your stake. This is the main highlight in the base game, but kind of hard to get.

The Thor Infinity Reels slot by Yggdrasil doesn’t have a free spins round, but it has a great kind-of-jackpot bonus. It involves the Mjolnir symbols with different values attached and is triggered by 6 or more hammers.

At this point, you’ll get 3 respins with Hammer symbols locked in place. Every time a reel is filled with 4 or more Mjolnirs, a new reel will be added. The grand prize for this round is 2,000x your wager for the golden hammer. The other hammer payouts are x10, x50, and x250 your stake.

You can see the jackpots to the left during the base game or bonus round so you never lose sight of what’s at stake.

The RTP of the Thor Infinity Reels is aptly placed at 96.2%. It’s a high volatility slot game with a maximum winning potential of 6,055x your stake.

There’s no question that Yggdrasil has another big hit in Thor Infinity Reels. It’s a great slot with fantastic winning potential and exciting features. It also comes with four big bonuses that may not be progressive, but still offer great returns.

If you’re in love with Norse mythology as much as we are, you’re going to love the Infinity Reels and action in this slot.

The Thor Infinity Reels slot was developed exclusively for Yggdrasil Gaming by Reel Play. Yggdrasil is one of the top developers on the market, and its platform is a great opportunity to showcase the talent of its subsidiaries.

The minimum wager in the Thor Infinity Reels slot is 20 credits. That’s pretty low and suitable for new players and can go all the way up to 4,000 if you have the money to spare.

Can I play the slot for free?

Yes, the Thor Infinity Reels online slot is available in demo and paid mode. We recommend trying it for free, so you can learn how the Infinity Reels work.

What’s the maximum win in the Thor Infinity Reels slot?

The maximum win in the Thor Infinity Reels slot game is 6,055x your wager. You can hit big wins before it too, especially in the hammer bonus where you can win up to 2,000x your wager.

Does the Thor Infinity Reels online slot have a free spins round?

Does the Thor Infinity Reels slot have a jackpot?

Yes, it does. The slot comes with four jackpots you can win under certain conditions. The smallest one is 10x your stake (Mini), while the Grand jackpot is worth 2,000x your wager.

What’s the best online casino where I can play the Thor Infinity Reels slot?

That depends on your preferences. If you ask us, you should try all reputable Yggdrasil Gaming casinos before you decide where to play the Thor Infinity Reels slot.

What symbols are in the Thor Infinity Reels slot game?

The symbols in the Thor Infinity Reels slot include shields, axes, Mjolnir, and Thor himself. There are low-win stylized card royals that look like ancient Norse runes.

Can I win real money on the Thor Infinity Reels slot?

Yes, you can! Play the demo first to learn how it works, then fund your account with real money, and you can win cash in return.

When was the Thor Infinity Reels online slot released?