Yggdrasil’s satellites have brought the Gigablox mechanic to life and players have loved the few slots like Buffalo Blox Gigablox so far built on it. Another entry in the series comes from ... Read Review 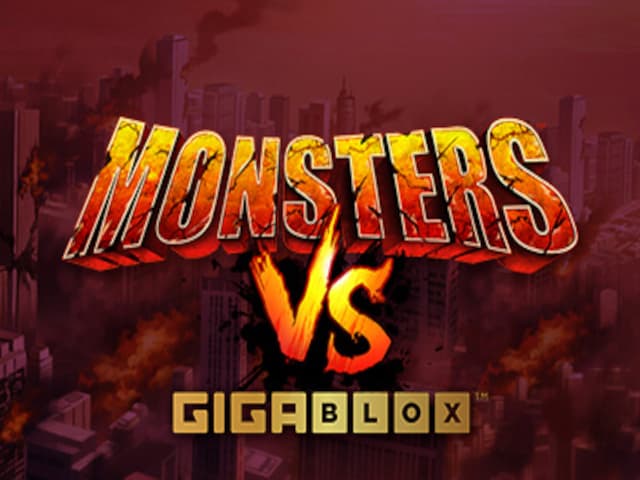 Yggdrasil’s satellites have brought the Gigablox mechanic to life and players have loved the few slots like Buffalo Blox Gigablox so far built on it. Another entry in the series comes from a newer studio, Hot Rise Games, whose debut slot was released in mid-2021 with support from Yggdrasil and Reel Play. A handful of slots later, Hot Rise Games is back with a perfect summer hit titled Monsters vs Gigablox.

It's a 50-payline volatile slot with an RTP of 95.6% that’s a nod to the classic game industry from the mid-1980s. It’s a throwback to Midway/WB’s classic Rampage, but obviously in the form of a slot and with other exciting features. The slot is based on giant monsters that destroy everything in sight, although for obvious reasons, the names of the monsters have been twisted a bit.

Read our Monsters vs Gigablox slot review below and see how the Gigablox stack up against the monsters.

The Monsters vs Gigablox slot has a pretty unusual payout reminiscent of Cluster Pays real money slots. It doesn’t fall in that category, though. The slot has a 6x6 layout with 50 fixed paylines set against an animated background showing a ruined city. Those monsters have made it their playground, in the process destroying the life of millions.

They also dominate the reels. The names are inspired by monsters from popular culture. For example, it’s pretty clear where Kongo Kong got his name from. He’s the top-tier premium paying 500x for six on a line. He’s followed by the slithering Lord Zar, a Gundam-like figure in Spartan Fighter V, and a Cthulhu-inspired monster named The Great Old One.

The visuals are amazing just like the animations, but we have to pay respect to the audio too. It’ll always keep you on your toes, creating a sense of ever-present danger when you spin the reels.

Developed on the HTML5 platform, the Monsters vs Gigablox slot is easily available on mobile devices. You can play it on your Android and iOS devices without downloading a slot app.

How to Play the Monsters vs Gigablox Slot

Open the wager picker and choose a bet from $0.50 to $12.50 per spin. Hit Play when you’re ready or use the Autoplay feature. As expected, any symbol on the reels can land as a Gigablox symbol. These oversized symbols function as individual symbols in sizes from 2x2 to 6x6. The Crown Wild substitutes for other symbols in winning combinations, while a Vs symbol is the Scatter that you need for the Free Spins Feature.

But before that comes up, you can look forward to plenty of Gigablox action. Cross your fingers that you land the top-tier Gigablox symbols and you’ll enjoy some nice payouts. This happens far more often than you think despite the high volatility.

The truly big surprises come in the Bonus Round where all wagers are off with the rampaging monsters going wild.

You need at least five Scatters on the grid to trigger the slot bonus. You start with four spins and an extra one for each triggering Scatter over five. A monster is then chosen as a Rampaging Monster which now appears in golden form.

This Rampaging Monster serves a dual role – as a Wild and a Gigablox symbol. All Monster Wild wins are doubled, and some Gigablox symbols go beyond the maximum size of 6x6.

Players can use the Bonus Buy feature and trigger the Free Spins Round immediately. It’ll set you back 75x, but hey, at least you’ll get to it immediately.

The RTP of the Monsters vs Gigablox online slot is low at 95.6%. That’s unusual for a highly volatile slot and it should have been a bit higher. The overall winning potential is decent, with maximum wins up to 19,942x the bet.

The Monsters vs Gigablox slot is a cool new game from Hot Rise Games that’s an obvious throwback to the classic rampage. We’ve been aching for a kaiju slot and this one is the closest the industry has so far.

It may not be the most innovative or brimming with special features, but what’s on offer is impressive, entertaining, and most importantly, rewarding. Play it at our recommended New Jersey online slot sites and top Pennsylvania online casinos now!

Who created the Monsters vs Gigablox slot?

The Monsters vs Gigablox slot was developed by Hot Rise Games. It’s a new studio in Yggdrasil’s portfolio that has already released five slots before. This one is the most ambitious undertaking, though, and will probably end up the best from its kitchen for the time being.

The RTP is surprisingly low at 95.6%. We wish it could have gone higher. This is a highly volatile slot that would have had even better-winning potential with an RTP of 96%. That said, it still pays decent sums of money, especially with the Gigablox involved.

What’s the minimum wager available in the Monsters vs Gigablox online slot?

Is Monsters vs Gigablox a Megaways slot?

No, it isn’t. The Gigablox name makes it obvious. This one is a far cry from the varying reel engine of the Megaways, instead focusing on Giga symbols. They can appear in sizes up to 6x6, and in this case, they represent six individual symbols.

How many paylines does the Monsters vs Gigablox slot have?

The Monsters vs Gigablox slot has 50 fixed paylines. You can’t adjust them but you’re always playing for the top rewards. Those 50 betways can deliver some great wins, even in the base game, with many of the monsters paying hundreds of times your bet for six.

Is there a Free Spins Round in Monsters vs Gigablox?

Yes, there is a Free Spins Round in the Monsters vs Gigablox slot. It is triggered by at least five Scatters which give you four free spins, and an extra one for every extra Scatter. The game chooses a Rampaging Monster before the bonus starts which appears even bigger and plays the Wild role.

Can I win a jackpot in Monsters vs Gigablox?

Monsters vs Gigablox isn’t a jackpot slot. The math model doesn’t have a progressive jackpot structure, so don’t expect to win millions. Still, it does pay nicely thanks to the Gigablox and the doubled wins in the Bonus Round, with maximums over 19,942x the bet.

What do the Gigablox symbols do in the Monsters vs Gigablox slot?

The Gigablox symbols appear in sizes from 2x2 to 6x6. They function as individual symbols, occupying normal positions on the grid. In the Bonus Round, the Rampaging Monster is a Gigablox Wild which takes your wins up further.

Is there a promo code for the Monsters vs Gigablox slot?

We have no promo code for the Monsters vs Gigablox online slot at the moment. Bookmark our site and keep checking the bonus code section. There might be a promo code to use on the Hot Rise Games slot soon.

When was the Monsters vs Gigablox slot released?

The Monsters vs Gigablox slot was released on August 1, 2022.