Following on, perhaps predictably, from Zeus and Zeus II, the Zeus III online slot machine takes many of the things that made its predecessors so popular and adds new elements to t... Read Full Review 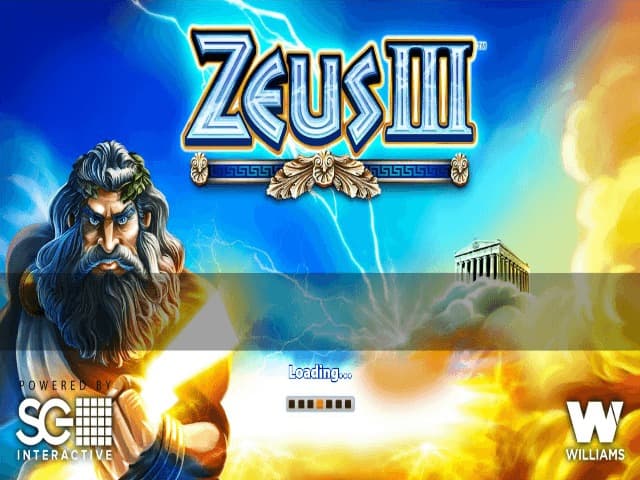 Following on, perhaps predictably, from Zeus and Zeus II, the Zeus III online slot machine takes many of the things that made its predecessors so popular and adds new elements to the mix. Zeus III is a 6-reel slot, where each reel is a different size, and there is a vast 192 paylines crossing the game.

Like the others in the same series, it’s available at some of the top online casinos, and you can play Zeus III on a PC, iOS, or Android mobile with no download needed. The layout of reels is unusual, but they are filled with classic images inspired by the ancient gods of Greece. Temples, warships and even a flying horse appear, but it’s the mighty god Zeus who has the power to trigger bonus features.

He can become a wild symbol if he’s seen in the right places, while the hand of Zeus holding a bolt of lightning, takes you through to a free spins bonus round. Your chances of collecting prizes is given a boost during the feature, as the reels swap places.

Ancient gods from Egypt, the Aztecs, and Greeks, are among the most popular characters ever to appear in slot machines. The Zeus III slot is another hugely popular game from WMS, thanks not only to the topic, but also the potential for big wins, that can reach a heavenly 800x your bet, or 96,000.00 at the maximum stakes if you're playing for real money.

Zeus III awaits players ready to take on the ancient residents of Mount Olympus. But how generous are the gods going to be today?

Once the game is on your screen, you will notice that reel 1, to the left side, hold just 2 symbols. Reel 2 has 3 symbols on it, and this keeps rising, until you get to the sixth reel where you discover 7 symbols. The effect is that it’s relatively easy to land longer runs of matching symbols across a payline, for some big wins, giving the Zeus III slot machine from WMS a low volatility at top New Jersey online casinos and recommended Pennsylvania online casino sites.

Don’t worry about having to remember where all 192 lines run from, as any winning combinations are clearly highlighted by the game software. In fact, don’t worry about anything to do with setting up and playing this game, as it’s all very easy to master.

You play with 40 coins and can use stakes as low as 0.40 or as high as 120.00 per spin. Take a look at the payout table, which you open via a button to the bottom left of the game, and you will see how many coins you win each time 3 or more matching symbols cross a line from the left side.

It all works in exactly the same way across desktop computers, laptops, iOS and Android smartphones or tablets. Features, including the unique free spins round, are also identical on any platform. Just note that the six reels means that you will need to have a mobile device in landscape mode.

If you have played the others in the Zeus slot machine series from WMS, you will recognize much of the style and many of the symbols. The reels sit against cloudy skies, floating in the heavens along with the Temple of the Gods. While colorful Club, Spade, Heart and Diamond symbols pay smaller prizes, it’s the themed images that you really want to see.

The ship, a vase, Greek helmet and Pegasus, the flying horse are worth more. The stern face of Zeus is the top symbol, worth 800 coins when seen across all 6 reels. Symbols can be stacked on their reels, improving your chances of claiming wins in each spin.

If Zeus appears stacked and fills a whole reel, he uses his powers to become a wild symbol that can act as others if he can then complete combinations. The temple is a standard wild symbol, but it doesn’t pay any direct prizes.

Neither wild can replace the hand of Zeus scatter symbol. Any 3 examples on the reels of the Zeus III slot machine will trigger 10 free spins. If you see 4 scatters at once, you win an instant prize of 10x your total stake, followed by 25 free games. The reward for any 5 or more scatter symbols on the reels at once is 50x your bet, plus 50 bonus spins.

The reels flip during the round, so the left side reel now holds 7 symbols, reducing down to 2 symbols on the right reel. It’s now even easier to line up combinations across the game, and more scatters add 5 more spins to the total.

WMS have done it again, taking a hugely popular game and adding new design and gameplay to the mixture. The reel layout might look a little daunting to start with, but this is a game that anyone can play, regardless of their skills and experience. All you need to remember is that matching symbols across the reels is easier during the free games, when they flip places. The big payouts before the free games begin means that you are guaranteed a prize.

We think the Zeus III slot machine from WMS looks good and comes with some exciting gameplay, but if it’s not to your taste, then you should play the popular Zeus slot game. It's another popular WMS slot game, one which is regarded by many is their best.

With no need to head out to a real casino, it’s never been easier to visit the gods of ancient Greece. You will find their virtual versions at the casinos we suggest on this page, where lucrative bonus funds are waiting for you to collect on registration.