Based on the true story of a slave who rebelled against the Roman Empire, the Spartacus: Call to Arms online slot is an exciting game that captures the drama of ancient battles. S... Read Full Review 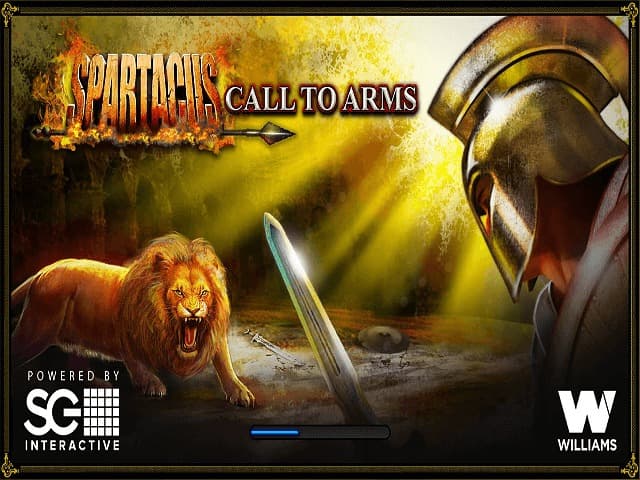 Based on the true story of a slave who rebelled against the Roman Empire, the Spartacus: Call to Arms online slot is an exciting game that captures the drama of ancient battles. Swords, shields and helmets appear across five reels and 50 fixed paylines, while a wild lion helps you to extra portions of prize money.

Win multipliers and free games are some of the rewards waiting to be claimed when you join forces with Spartacus and take up arms against the might of the Romans. You can spin these epic reels on a desktop computer, iOS, or Android mobile, collecting wins that max out at a huge 640,000.00.

If the story of Spartacus is unfamiliar, Google it, or watch the epic Kirk Douglas movie. It’s a tragic tale which we won’t cover in too much detail here, but it’s a fascinating backstory to this spectacular slot from WMS.

Although the Spartacus: Call to Arms slot machine is filled with bonus features and winning opportunities, it’s still very easy to set up and play. Deciding on your bet level couldn’t be easier, with clicks on plus and minus buttons changing your stakes from the minimum of 0.50 to the maximum of 100.00 per spin. Of course, you can adjust this between spins to suit any betting strategy.

The fact that you can play the Spartacus: Call to Arms slot on a PC, Android, or Apple mobile means that you won’t need to march all the way to a land-based casino. It also means that unlike physical casinos, where even the largest have limited floor space, you can access a vast collection of games, all from one device.

Other convenient features include an auto-spin mode and you can select the volume of the soundtrack to accompany the spins. Even the mobile version of Spartacus: Call to Arms has all of the same style and features of the desktop game. The fantastic win multipliers feature works just as well, and the symbols return the same generous rewards, at a long-term average of 96.05%.

Spartacus: Call to Arms pays out when at least 3 examples of the same symbol land across a line, from left to right. If you want to see how many times the amount staked on each line is won, click the Paytable button. Gold coins, a sword and the shield pay up to 40x, while elaborate gladiator helmets pay the mid-range prizes. Two soldiers in the midst of battle pay 300x, and 320x your line bet when either fills a payline.

The four rows of symbols sit against a wood-effect backdrop, surrounded by a decorative gold frame and Roman columns. Dramatic music, fitting to the epic theme, plays out as the reels spin. The columns, one on each side, each have four shields chained to them and random symbols appear on these in each spin. These are the key to a fantastic bonus feature.

The Spartacus: Call to Arms slot machine from WMS also has a couple of special bonus symbols. The game logo is wild and worth up to 500x your line bet. If it lands on the columns, it moves across to a random place on the reels, making it easier to complete combinations as it acts as any other, apart from the lion.

The lion roars into action when it lands on reels one, three, and five at the same time. You claim 10 free spins, with more wild symbols in play. To make this round even more exciting, all multipliers from the column symbols are doubled in value, so you could win a huge 1,000x the base prize. If the most valuable symbol lands across a line, that’s worth 640,000.00!

The historical theme and classical style has helped the Spartacus: Call to Arms slot become one of the top games in the WMS range. Players across the world are drawn to games based on ancient times, but it’s not just the looks, as this slot has unique, and highly impressive, features.

It’s all about those random symbols on the columns, boosting wins by up to 500x, or even 1,000x during the free games. In our experience, it’s very rare that you will see both columns filled with a single type of symbol at the same time as it makes up a win. However, landing a winning combination with two, or three matching shields on the columns is much easier.

Although WMS provide lots of background information, such as the return to players percentage, they don’t reveal the volatility of the Spartacus: Call to Arms slot machine. We would class it as a medium volatility game.

Fans of epic Roman movies might wish that Spartacus: Call to Arms was based directly on the film. If that includes you, be sure to play the Gladiator slot from Playtech, which features images taken directly from the Russel Crowe film. Bonuses include massive progressive jackpots.

Play these games at some of the top New Jersey online casino sites and the best Pennsylvania online casinos. We’ve found the top sites, where bonus funds and free games await those ready to take on the Roman Empire.