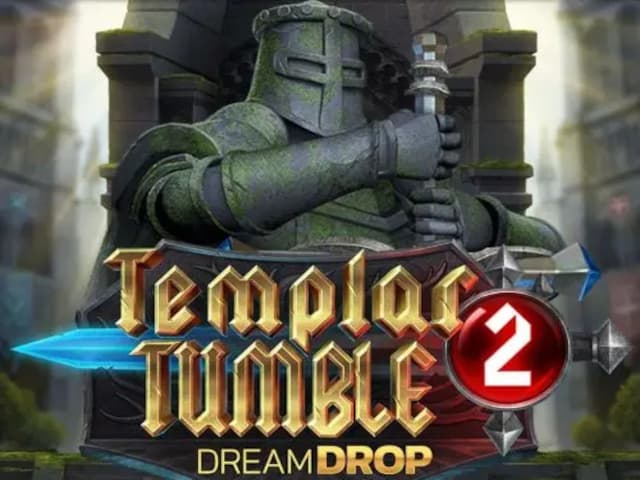 Templar Tumble 2 Dream Drop has a very heavy and dark tone. The slot game takes place outside what appears to be some sort of castle’s walls, with huge stone knights standing guard on either side of the reel-set. It’s all very dark and atmospheric and it does a good job of immersing players into its world.

The symbols on the reels are made up of diamonds and other royal symbols and are stylized as big grey blocks, further adding to the sense of doom that the slot gives out. While it is very dark, it is delivered in a stylish manner, and it looks great. When players trigger the Free Spins round, the slot allows you to enter the Templar, and you are placed inside a beautiful golden chamber.

The fun in Templar Tumble 2 Dream Drop takes place on a much bigger grid than what you find in most best slot games. The game uses six reels, each of which displays seven symbols. In some cases, the spaces on the reels are taken up by blank symbols.

The game has 117,649 ways to win, sticking close to a Megaways-style set-up. Another feature that it borrows from Megaways is the Cascading Wins mechanic. Winning combinations are removed from the grid, with new symbols falling down to potentially cause more wins. This stops when there are no wins left.

Players should make sure that they have selected the correct stake before they start spinning the reels. The smallest they can wager is $0.20 and the maximum is $50, making this a good fit for the majority of budgets.

Templar Tumble 2 may have an enhanced grid size, but it has no problems fitting onto a range of different screen sizes. The slot works well on mobile screen sizes and can be enjoyed on most operating systems and platforms. With most top online casinos playing allowing mobile gaming, players will have no issues finding somewhere to play Templar Tumble 2 Dream Drop slot for real money on their mobile.

On each spin in the game, there will be symbols that are marked with blue and red frames. When these are part of a winning combination, they will add one point to their respective meter on each side of the reels. When five of each colour are collected, it will boost its respective feature.

The Red Symbol helps boost the number of Mystery symbols that appear on the grid. Each level that is completed will add two more Mystery symbols to the reels. They can either reveal standard symbols or Money symbols worth up to 100x the stake.

The Blue symbols fill up the Win Multiplier meter. Each level that this moves up increases the win multiplier by +1.

There is also a Templar Tumble 2 Dream Drop Free Spins round. This is launched when players land three or more Scatter symbols. Ten Free Spins are initially rewarded, with any additional scatters landing in the round adding another spin.

This takes place across five reels, each of which corresponds with one of the jackpots – Rapid, Midi, Maxi, Major, and Mega. Players need to then land a number of DD symbols on the respective reels to win the jackpots.

The RTP for the Templar Tumble 2 Dream Drop slot game comes in at 94%, putting it lower than average. In the base game, the maximum win available is 20,000x the player’s stake. This would be enough by most people’s standards, but the game also has the Mega Jackpot in the Dream Drop round. This seeds at $500,000. The game is considered highly volatile.

The Templar Tumble 2 Dream Drop progressive jackpot slot game was developed by Relax Gaming. Relax Gaming is one of the best online slot developers in the industry and you can find reviews of many of its products here at Slotsource.

Is the Templar Tumble 2 Dream Drop slot a sequel?

The Templar Tumble 2 Dream Drop progressive jackpot slot game is a direct follow-up to the hugely popular Templar Tumble slot game. The original title was also developed by Relax Gaming and was released in 2021.

What is Dream Drop?

The Dream Drop mechanic is a Jackpot system that was designed by Relax Gaming. It is a five-tiered progressive jackpot that can be triggered at any time in the base game. It presents players with the chance to win either the Rapid, Midi, Maxi, Major, or Mega jackpot.

No. Templar Tumble 2 Dream Drop is not a Megaways slot game. However, it has many similar features. This includes up to 117,649 different ways to win and Cascading mechanics that rewards players with new symbols whenever they land a win.

Can I play Templar Tumble 2 Dream Drop for free?

The answer to this depends on where you are located. Templar Tumble 2 Dream Drop can be played for free in a lot of locations.

The Templar Tumble 2 Dream Drop progressive jackpot slot was released by Relax Gaming on November 2nd, 2022. It can be found at a wide range of top online slot sites.

Can I play Templar Tumble 2 Dream Drop on my mobile?

Yes! Templar Tumble 2 Dream Drop has been developed using HTML5 technology. This ensures that it will run on a wide range of different operating systems and mobile devices. The mobile slot plays the same way as the desktop version.

Are there any Free Spins in Templar Tumble 2 Dream Drop?

Yes! Landing three or more Scatters in the Templar Tumble 2 Dream Drop progressive jackpot slot will launch the game’s Free Spins round. Players are rewarded with an initial 10 spins, with any extra Scatters adding another spin to the count.

What is the biggest win available in Temple Tumble 2 Dream Drop?

The biggest win that a player can secure in the Temple Tumble 2 Dream Drop slot base game is 20,000x their stake. There is also the chance to win one of five jackpots thanks to the titular Dream Drop mechanic.

What do the two meters do in Temple Tumble 2 Dream Drop?

There are two meters in Temple Tumble 2 Dream Drop – one on either side of the reels. The Red meter collects red-framed symbols and helps boost the Mystery Symbol bonus. The Blue meter collects blue-framed items and boosts the Multiplier.