Relax Gaming has been on a roll lately. The studio has released more than a few hit slots in the past year or two, and Snake Arena Dream Drop might be the latest one. We’re going... Read Full Review 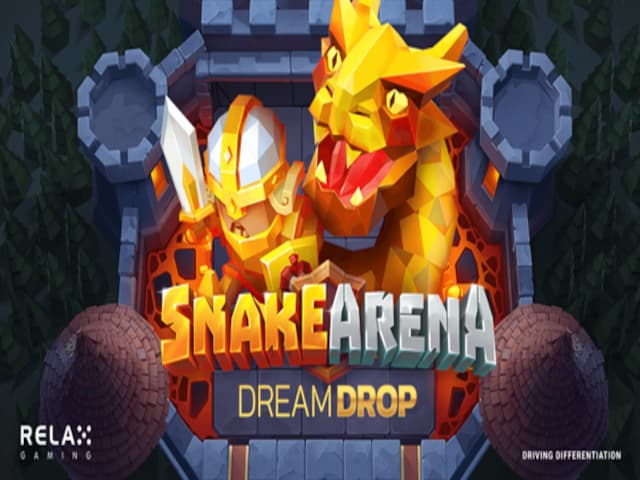 Relax Gaming has been on a roll lately. The studio has released more than a few hit slots in the past year or two, and Snake Arena Dream Drop might be the latest one. We’re going to admit that it sounds more like an Esports tournaments or a Rocket League competitor. However, it is a slot with some modern gaming elements that aims to get the attention of all kinds of players.

The studio has made it clear that this is a slot as close as possible to a real video game. It has story elements too with wild snakes being chased by a gallant knight in an alternate history setting. The specs are all great too. It’s a medium to highly volatile slot game with an RTP of 94% which sounds a bit low. However, the slot is brimming with features and comes with progressive jackpots too, so it’s no wonder why the RTP is lower.

As a matter of fact, this is the progressive jackpot version of the original Snake Arena slot. If you’re looking to score wins as fantastic as the setting, this is the better pick.

The Snake Arena Dream Drop slot plays out on a 5x5 field. Its kind-of-isometric visuals make it look like a video game rather than a real money slot, and we applaud Relax Gaming’s effort for it. The slot’s symbols are divided between premiums and low-win symbols, with the crown paying the most – 20x for five on a line. A snake eye pays half of that for the same combo, while the remaining symbols pay much less.

Snake Arena Dream Drop’s graphics are nicely accompanied by a mellow tune that sounds like a remix of a medieval fantasy song. They pair to create an immersive atmosphere of a kingdom far away where knights chase wild snakes.

You can play the Snake Arena Dream Drop slot on the go with ease. Just head to your favourite Relax Gaming slots casino and have fun via a browser. No need to download any app to play spin it on your mobile phone.

How to Play the Snake Arena Dream Drop Slot

Choose a wager from $0.20 to $100 per spin and hit the Spin button to start the game. Lining up the crowns and snake eyes pays the most. The knight and parts of the snake act as Wilds and they’re also key to landing one of the special features.

At random times during the base game, the Wild Chase feature might spring into action. As the name suggests, it’s a Wild chase between the knight and the ferocious snake. The snake will peek from one corner while the knight tries to avoid it at the bottom. After three peeks, the two symbols will appear on the same reel and turn it Wild. Whenever the feature is triggered, at least one fully Wild Reel is guaranteed.

Remember those progressive jackpots we mentioned? The jackpot feature triggers randomly, giving players a single spin on a new grid featuring blanks and DD symbols. Five of these take you to the Jackpot Round where you’re guaranteed one out of five progressive jackpots. The smallest one seeds at $1, while the Mega jackpot seeds at $500,000.

If the snake head lands on the first reel in addition to a knight anywhere on the grid, you get to the Bonus Round which is called Dream Drop. The Snake Wild will start moving toward the knight and eventually eat that Wild, increasing its size. It’s similar to the legendary Nokia Snake games that grew in size after eating…well, pixels.

The objective is to make the snake so Wild to fill 2-5 reels. This pays 1,000x on top of any regular wins. A random jackpot trigger can occur during this round, so you might end up winning fantastic sums of money beyond the slot’s maximum winning potential.

The Snake Arena Dream Drop slot has an RTP of 94% paired with medium to high variance. With a bit of luck and not counting the jackpots, the maximum winning potential is 2,758x the stake.

Snake Arena Dream Drop is a unique slot by Relax Gaming that doesn’t just rely on simple reel spins to deliver the big wins. It has jackpots and a slew of special features that can bring fantastic wins to your hands. We were especially pleased with the random triggers that add another layer of fun to an already exciting game.

Give it a spin right now at the top Pennsylvania online slot sites and the best New Jersey online casinos, and you’ll be excited too.

The Snake Arena Dream Drop slot was made by Relax Gaming. This is one of the hottest studios in the business and the creator of many hit slots, mainly Temple Tumble, Money Train I and II, Beast Mode, and Midnight Marauder among others.

The lowest wager you can place on the Snake Arena Dream Drop slot is just $0.20. That’s as low as a wager goes in today’s industry, so any player can ‘afford’ to play this slot. It’s also a great minimum wager for those who like to play with a bit of strategy and risk.

The RTP is pretty low at 94%. A total of 82% goes to the base game and 12% goes to the jackpot. However, for a slot of medium to high variance that can be unforgiving sometimes, it’s a bit low number in our opinion.

Can I play the Snake Arena Dream Drop slot for fun?

Yes, you can. The Snake Arena Dream Drop is available for free and real money in all Relax Gaming casinos. Keep in mind that not all players can play it for fun.

How do I trigger the Wild Chase in Snake Arena Dream Drop?

Players can’t trigger the Wild Chase feature at will. It’s a random feature that puts the snake and knight against each other on the grid. They can turn 2-5 reels fully Wild, resulting in crazy wins for the luckiest players.

How can I hit the Snake Arena Dream Drop jackpots?

The Snake Arena Dream Drop jackpots are a random feature too. At any point in the base game or Bonus Round, you might get a jackpot spin on a special grid. Land 5 DD symbols for a guaranteed progressive jackpot with the highest one seeding at $500,000.

Should I always wager the maximum to win big in Snake Arena Dream Drop?

No, you don’t need to wager the max all the time to win big. It’s all down to luck. The random features can drop the biggest wins, but you have no control over them. Trigger a jackpot spin and you may end up winning the biggest prize.

Is there a promo code I can redeem on the Snake Arena Dream Drop slot?

Yes, you can. The slot is available for free and real money in all Relax Gaming casinos. Choose the real money mode after making a deposit and you’ll play for real money. With a bit of luck, you may end up winning cash rewards.

When was the Snake Arena Dream Drop slot released?

The Snake Arena Dream Drop slot was released on June 8, 2022.