Opinions on Colombian drug lord Pablo Escobar have always been divided. Many have called him El Patron Del Mal (The Patron of Evil) while millions of Colombians considered him a hero. Regardless ... Read Review 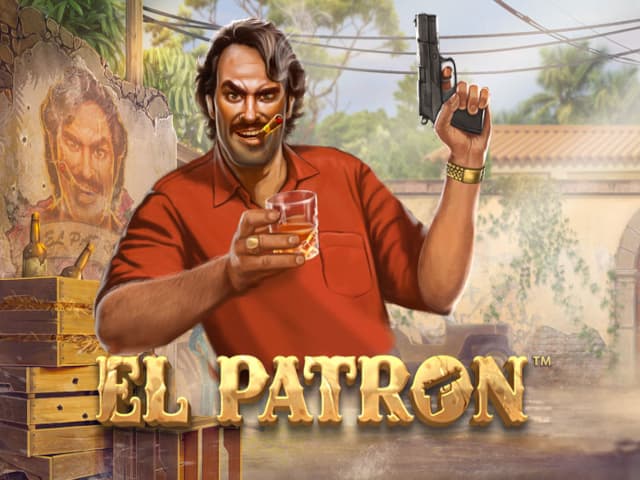 Opinions on Colombian drug lord Pablo Escobar have always been divided. Many have called him El Patron Del Mal (The Patron of Evil) while millions of Colombians considered him a hero. Regardless of your opinion, it’s clear that he went down as one of the biggest kingpins in the history of crime, and his drug-fuelled influence went beyond the life of crime. He had a political influence in Colombia too, always caring for the poor and robbing the rich, similar to what Robin Hood did, but in real life. El Patron is once again immortalized in a new slot game by Stakelogic of the same name.

A highly volatile slot with an RTP of 95.80%, this 3,125-payline slot chronicles the life of El Patron himself. You’ll see him with a glass of whiskey in one hand and a gun in the other in a highly entertaining slot game with a bonus top/bottom reel system. When triggered, these modifiers will enhance the action and deliver big wins.

El Patron is available for free and real money in any Stakelogic top Pennsylvania online casino and the best New Jersey online slot site. With wins up to 25,000 times the wager in the bag, it’s time to silence the competition and reign in the Colombian underworld once again.

The El Patron slot has a 5x5 setup with locked positions on the top and bottom of the reels. We’ll talk more about them later. Visually, it’s as impressive as it gets, with plenty of crime elements gripping the reels. These include stacks of cash and machine guns in the corners, while the reels sit against a street in Colombia with graffiti showing El Patron himself.

Escobar behind bars is the highest-paying premium, delivering 10x for five on a line. His associates behind reels pay half of that, while the other symbols pay less. There’s a Wild too although not in its regular form, and a Bullet Scatter along with other special symbols that can boost your wins nicely.

The great graphics are accompanied by solid audio and sound effects. We were especially pleased with the theme that suits the theme a lot.

Thanks to the fact that it was developed on the HTML5 platform, the El Patron slot for free is available on both Android and iOS devices. You can play it for free or for real money via your browser, no slot app download is required.

How to Play the El Patron Online Slot

To start playing, you’ll need to place a wager first. The default is set to the lowest $0.10, but you can bump that up all the way to $50. Hit the spin button when ready on the right or use the Autoplay feature on the left.

El Patron looks a bit unusual due to the extra bottom and top reel positions. These are locked with the game’s name scribed on them. On each spin, they spin horizontally along the reels, creating a head spinning (in a nice way) effect while offering enhanced wins. This is called the Action Feature System and can award up to 3 modifiers on a spin in both the base game and Bonus Round.

Wild can step in to complete winning combinations, but they don’t land in the traditional form. Instead, they can appear in many forms on the locked positions and only on the bottom reel. The top reel positions feature random action symbols that can boost your wins in other ways (Multipliers, etc.).

The Action Feature comes into play when top matching symbols are revealed on top and the bottom. For example, you can get a Multiplier Wild, Dropping Wilds, or Expanding Wilds that can lead to stunning winning combinations. The Multiplier Wilds can go as high as x5, and as many as 5 can be added to the reels.

This is the only feature in the base game, but there’s more action in the Free Spins Round.

The Free Spins Round starts when three Scatter Bullets land anywhere in sight. It starts with 12 free games, with the Wilds on the bottom reel replaced with Machine Gun Symbols. Whenever it aligns with a top-reel action symbol, one out of three modifiers is added to the reels, giving you random Wilds, Multiplier Wilds, or Sticky Wilds.

In some jurisdictions, players are able to buy their way to the Bonus Round. The barebones experience costs 100x, but you can also boost that to the Deluxe version with 22 free bonus games for 300x.

The El Patron slot RTP is set at 95.80%, which is a bit lower than expected. It’s just OK for a highly volatile slot, but don’t forget that it has a slew of modifiers on the bottom and top of the reels.

El Patron is a fun real money slot that celebrates one of the most controversial crime figures in history. Regardless of your opinion on Pablo Escobar, it’s a pretty cool slot with solid features that can deliver wins up to a whopping 25,000 times your wager.

It’s ideal for fans of Stakelogic’s action-packed slot games with exciting features that can pay big. Of course, it’s also fitting for fans of El Patron, the hero/kingpin that many glorify to this day.

The El Patron slot was developed by Stakelogic, the same studio that developed hits such as Volcano Deluxe, 9 Pearls of Gold, and Mayan Rush.

What’s the lowest wager I can place on the El Patron slot?

The lowest wager is $0.10, low enough for new players and those who’d like to try a few spins.

Is there a jackpot in the El Patron slot?

No, there isn’t. El Patron is not a jackpot slot game, but if you hit the maximum win of 25,000x, it’s certainly in the vicinity.

How do the bottom and top reel positions work in the El Patron online slot?

The bottom and top reel positions are locked until they reveal a modifier. You’ll find Wilds on the bottom reel and other modifiers on the top. When they align on a regular reel, one out of three features is awarded – Dropping, Expanding, or Multiplier Wilds.

Does the El Patron slot have a Free Spins Round?

Yes, it does. The Free Spins Round is triggered by three Bullet Scatters. It gives players 12 free spins with the Action Feature System active for the duration of the Bonus.

Is the slot available on mobile devices?

Yes, you can play the El Patron slot on your Android and iOS devices without downloading any app.

Can I play the El Patron slot for free?

Yes, you can. The El Patron slot demo is available to players in all Stakelogic casinos.

Which slots are similar to the El Patron slot?

The closest slot to El Patron in theme is NetEnt’s Narcos. If you’re looking for a slot with similar features, Nolimit City’s San Quentin is a great choice.

When was the El Patron slot released?