A company that is known for innovation, NetEnt has always been at the forefront of the online gambling industry. Nearly 20 years later than its inception, the slot studio continues... Read Full Review 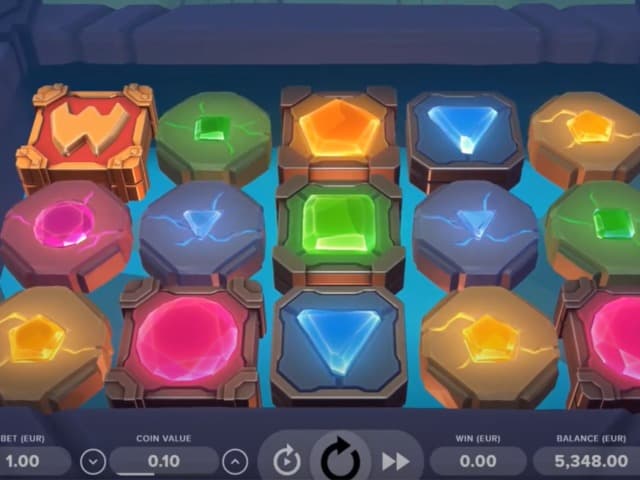 A company that is known for innovation, NetEnt has always been at the forefront of the online gambling industry. Nearly 20 years later than its inception, the slot studio continues to revolutionize its portfolio. Gems of Adoria is the studio’s first real-time 3D slot game that features never-before-seen mechanics.

The Gems of Adoria slot machine’s RTP isn’t that impressive at 96.13%. However, the slot pushed forward with 3D graphics and gameplay that will surely stun slot fans. The cutting-edge video slot uses full 3D symbols that are being flipped and rotated when the reels turn.

You get to see the action from numerous angles – that’s something other slots rarely allow. Read our Gems of Adoria slot review to see what makes the latest NetEnt hit tick.

Gems of Adoria is not your typical slot game – it’s as far from regular online slots as it can be. Announced early in 2020, the slot game finally saw the light of day. Fans were pretty excited when the Swedish company announced a cutting-edge slot and rightfully so.

NetEnt’s latest slot delivers on its promise of a unique ride. The reels are set in some kind of ancient ruins. Of course, the symbols are shiny-coloured gems laid down in a stone stronghold. Thanks to the 3D graphics, the camera angle will shift from time to time, allowing you to enjoy the game from a new perspective.

In more ways than not, the Gems of Adoria slot reminds us of video games. It certainly looks and plays like one, and of course, it pays like a slot. You get 15 active betways with plenty of gems to flip across them. The most valuable symbol is the ruby gem encased in special space metal. Land five of these for a max payout value.

How to Play the Gems of Adoria Video Slot

To start the game, you must set your real money bet size first. The minimum bet is 0.10 while the maximum is 200 coins. Pick what suits you best and let the reels spin. The decent-sized betting range allows great flexibility and makes the game perfect for low- and high-rollers.

Once the reels turn, there are two special features that can bump up the payouts. The first is tied to the so-called Striking Wilds. These can land over the gems at any time and can lead to amazing returns.

The second feature are the flipping symbols. When active, 2-5 consecutive symbols in a row can flip vertically or horizontally, leading to higher payouts than the previous ones. Those are the only two features active in the base game.

If you’re lucky enough to land several wilds, you can win great rewards. The maximum payout you can expect is 500 times your stake, which doesn’t look like much, but it’s not a bad reward at all. This goes double for players who max out their bets.

The Gems of Adoria slot has an RTP of 96.13% which is lower than many NetEnt slots. Its maximum payout is middling at best – 500 times your bet. But, the math model and payouts aren’t the focus of this slot.

NetEnt has created a true gem of a slot game thanks to the 3D graphics and one-of-a-kind gameplay.

Gems of Adoria – Our Verdict

Play it for real money just like NetEnt intended and you’ll certainly be moved by the 3D symbols and the one-of-a-kind gameplay. Check out the best way to play by visiting our list of the best online slots sites in New Jersey and Pennsylvania.