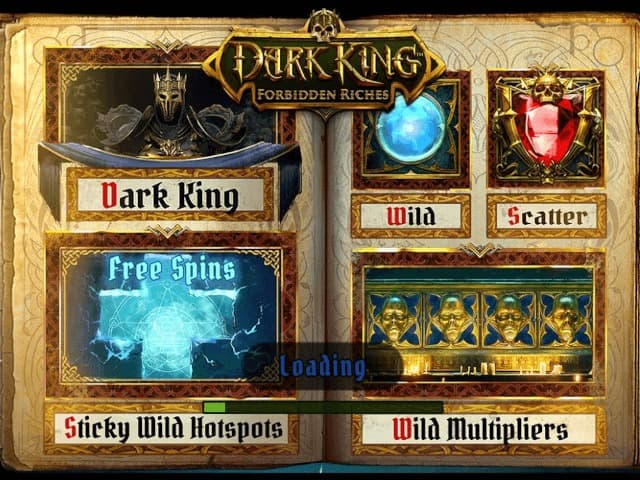 A wicked and terrifying new NetEnt release, the Dark King: Forbidden Forest will take you deep inside the layer of the dark and evil king. A 5-reel, 3-row slot with wild multipliers, sticky wilds, and two different rounds of free spins, the slot game promises a lot of old-school fun in a visually-impressive package.

A dark addition to NetEnt’s collection, the Dark King: Forbidden Forest online slot is a beautifully crafted game. It’s a nice departure from the flashy and colourful NetEnt releases we’re used to seeing, appealing to all horror fans.

Defeat the dark king with a slew of features and you could claim his throne and earn a bunch of golden coins that will make you richer than a true king.

NetEnt’s releases are among the most visually impressive in the industry and this one doesn’t disappoint. The Dark King: Forbidden Forest slot machine is a horror fan’s dream. The reels are set against a dark dungeon with tormented souls and skulls that give it an ominous vibe.

The dark-green colour combo suits the slot well. When it comes to the symbols, the reels are populated by the dark king himself as well as skulls, gems, orbs, and gothic card royals which are the game’s low-paying symbols. In the background, a dark music theme sets the tone for the gameplay, and those whispers make for a truly creepy atmosphere.

Aside from that, the Dark King: Forbidden Forest slot is your typical slot game. It has 5 reels in 3 rows with 20 paylines and old-school gameplay. Spinning the reels won’t be a problem for any player as long as you’ve spun slots before.

How to Play the Dark King: Forbidden Riches Slot

As with all slots, you’ll need to set your bet size in this one before you start playing. The Dark King: Forbidden Forest slot is playable from 0.20 up to a massive 400.00 per spin. As soon as you’re satisfied with your bet, spin the reels to start the game.

You’ll be hoping to land the blue shining orb for the highest base game rewards. Five of these will bring you 25x your bet, just like the Dark King himself. The orb is also a wild symbol and multiplier that can spice up your wins.

The Dark King: Forbidden Forest slot has an RTP of 96.06% and a maximum prize worth 2,000 times your real money bet. It is of medium-high volatility, so you shouldn’t expect to land massive rewards that often.

Be mindful of your best and keep going – getting to the free spins round will pay off.

Play Dark King: Forbidden Forest for real money and push the Dark King back into oblivion – you’ll be greatly rewarded for it. Check out our list of recommended online casinos in New Jersey and Pennsylvania for the best playing experience.