Most Haunted Hotspots In The US

Whether you are a staunch believer, a skeptical cynic, or somewhere in between, there have been hundreds of thousands of ghostly reports across the US; with people claiming to have had run-ins with the supernatural.

For Halloween this year, we were curious to find out: what exactly are the odds of seeing a ghost? We monitored paranormal activity in 2022 across all 50 states to discover the United States’ most haunted hotspots; and it turns out you might well hit the jackpot in Texas, where there have been 4,938 ghostly sightings – more than any other state.

If you fancy your chances, you could also try heading to California and Ohio, which have had the second and third most ghostly sightings.

At the other end of the spectrum, the odds are not in your favor in Delaware, which ranks second to last, just ahead of the not-so-spooky Puerto Rico.

Here are the top 20 most haunted states, and if you play your cards right, you might get to see a spirit too. 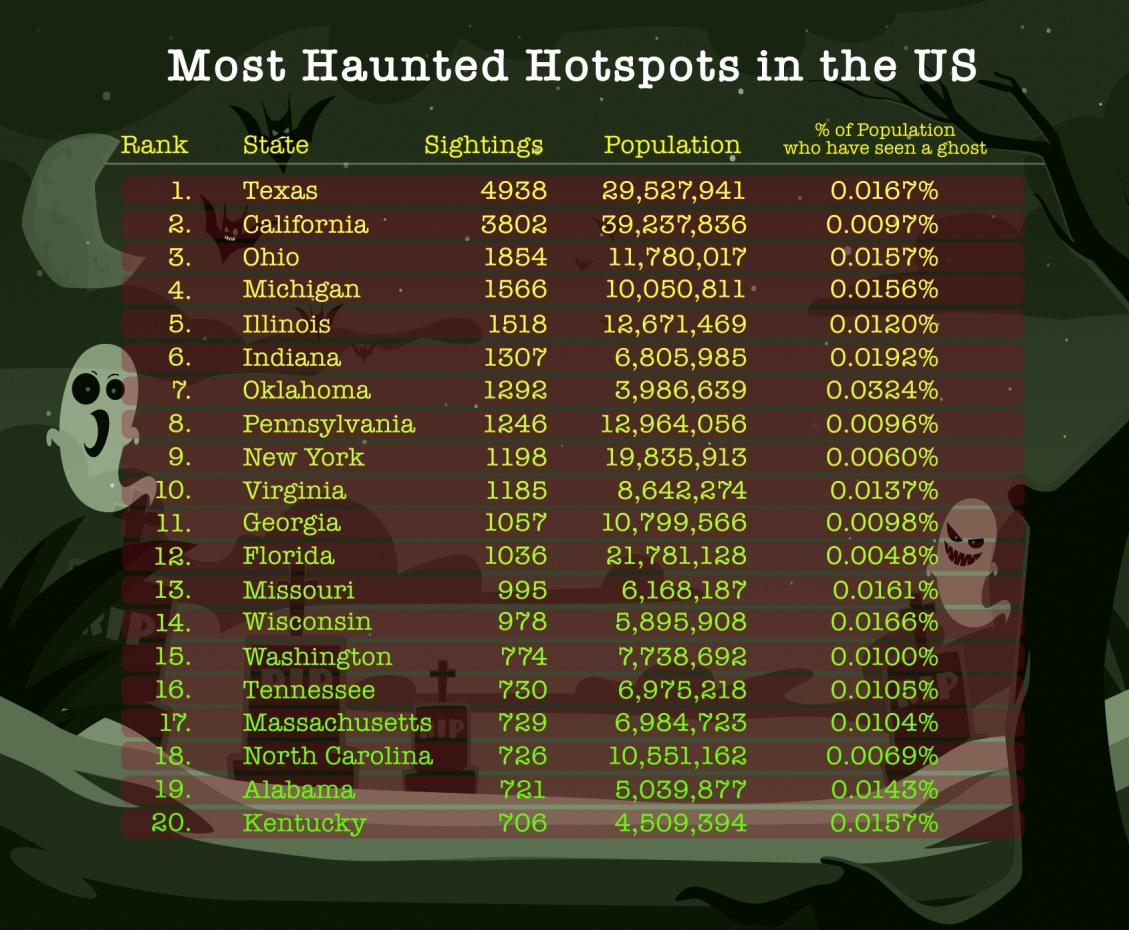 Most Haunted States Facts and Figures

According to Ghosts of America, the total number of recorded ghost sightings across the country is 66,499. That number is rising every day. In the most recent incident in Texas was that of a haunted high school. According to the report, Clear Creek High School's courtyard, bathroom stalls, and computer labs all have apparitions.

Although the top states for the number of ghost sightings were Texas, California, and Ohio, let’s take a look at the other numbers and highlights.

The odds of seeing a ghost are actually highest in Oklahoma. This state is ranked seventh in overall sightings but has the highest percentage of the population that has seen a ghost: 0.0324%.

Oklahoma's most recent sighting was in the city of Coalgate. The person who reported the incident said "baby-like handprints" appeared on their car window after using an Ouija board in a cemetery. She warned readers not to disturb the dead unless they have a personal connection with them.

We monitored the number of ghost sightings per state from http://www.ghostsofamerica.com/ to determine which state is the most haunted.

Check out Slotsource.com other studies here: