The story of Dr. Jekyll and Mr. Hyde is a tale of doubles and disguises as well as human desire. It’s a tale that seems as old as time itself and has been adapted into all kinds ... Read Full Review 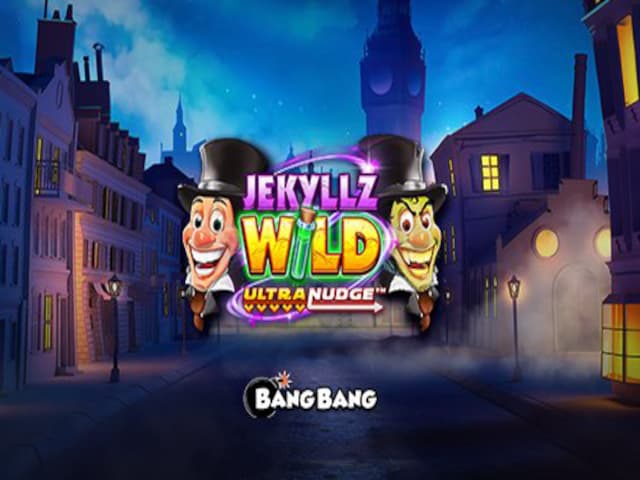 The story of Dr. Jekyll and Mr. Hyde is a tale of doubles and disguises as well as human desire. It’s a tale that seems as old as time itself and has been adapted into all kinds of media, including slots. Some of them were good, others less so. When it comes to Jekyllz Wild ULTRANUDGE, you’re getting something truly different thanks to Bang Bang Games and Yggdrasil.

As you might guess from the name, this is a pretty complex slot. It might look like a regular 5x4 game, but the Ultranudge mechanic and Wild features bring a lot of bang for your buck. The medium variance slot has an RTP of 96% and 40 fixed paylines. It’s all about the special features in this one, the good doctor starting Ultranudges while his evil sidekick collects cash.

There’s a Free Spins Round too in which you can gamble for more spins or lose it all. It’s yet another tale of duality like the original in a fun slot that’s available for free and real money at our recommended NJ online slot sites and slot sites in Pennsylvania online.

The Jekyllz Wild ULTRANUDGE slot has a 5x4 setup in an obvious laboratory setting. Unlike other slots of its ilk, this one has a bit of a funny side to it. Only visually, though – the gameplay features are as serious as the story itself. In typical Yggdrasil fashion, it looks pretty great and modern, which is reflected in the visuals and the animated background.

You’ll see all kinds of potions on the reels, but make sure not to drink the wrong one. There are two Wilds – Dr. Jekyll and Mr. Hyde, with the premium set including a Bell, Pen, an Officer’s Hat, and a Lantern. The Bell pays the most, delivering wins of 5x for five. The symbols set is completed by four card royals as well as a Diamond Scatter.

All the controls are in the usual spots, and the audio and soundtrack will immerse you deep into the story. It’s a great package as expected out of Yggdrasil’s slots.

You can play the Jekyllz Wild ULTRANUDGE online slot on any Android and iOS device. Since it was developed on the HTML5 platform, allowing you to spin the reels straight from a mobile browser with no slot app downloads.

Choose a bet between $0.20 and $400 per spin to start playing the Jekyllz Wild ULTRANUDGE slot. By default, the wager is set at $2, which might be a tad high for casual players. Adjust it using the tool beneath to reels and let’s get down to work.

The base game offers standard slot action boosted by the two Wilds. They both step in to complete winning combinations, and any win involving them triggers the titular Ultranudge feature. When triggered, all symbols will nudge down the reels fuelled by winning spins. You get respin after respin as long as you record wins, and each win also gets the multiplier up by +1.

From time to time, a Jekyll Wild can turn into Mr. Hyde when potions are present around them. This is reminiscent of the story in which, as you might know, Dr. Jekyll experiments with different potions that eventually turn him into the villainous Mr. Hyde. The potions pay medium-sized payouts on their own, but they also carry cash values. These values can only be collected by Mr. Hyde Wilds.

Three or more Diamond Bonus Scatters can trigger the Bonus Round. You get 12 free spins, to begin with, and you can gamble them upfront for a bigger number (up to 20). In the Bonus Round, the Mr. Hyde multiplier increases by +1 for each Ultranudge. It doesn’t reset on losing spins, and all new Mr. Hyde Wilds that appear on the screen start at the current multiplier level.

Retriggering the Bonus Round is possible with three Scatters which give you 12 more spins. The Gamble feature is available on each retrigger and can give you a starting multiplier of x10. However, keep in mind that you may also lose it all, so use it sparingly.

The Jekyllz Wild ULTRANUDGE slot has its RTP flat at 96%, which is great for a medium volatile real money slot. You can’t adjust the 40 fixed paylines. The maximum win is projected at 6,350x the bet.

The story of Dr. Jekyll and Mr. Hyde gets another exciting retelling in the Jekyllz Wild ULTRANUDGE slot. It’s a pretty fun slot game that digs deep into the duality of the story, allowing you to see the transformation firsthand and benefit from it. It’s a slot that bears all the markets of the top Yggdrasil slots, and thanks to the high winning potential, it’s one you should definitely give a try with the best slot bonus.

The Jekyllz Wild ULTRANUDGE online slot machine was developed by Bang Bang Games and released on Yggdrasil’s platform. Bang Bang has released online slots for Yggdrasil before, including a few that work on the bigger studio’s headline mechanic – Gigablox.

No, it isn’t – the variance is set to medium. This means that you can expect varied wins per spin, so a few small ones in addition to a big one. However, the slot isn’t without dry spells, so make sure to adjust your bets accordingly and play responsibly.

How many paylines does the Jekyllz Wild ULTRANUDGE slot have?

The Jekyllz Wild ULTRANUDGE slot has 40 fixed paylines. Unlike older releases, you can’t adjust these, so you’ll always be playing for the top prizes per line. Maxing out your wager can deliver pretty big wins, but it’s also riskier compared to properly adjusted bets depending on the action.

Every time you score a win involving a Wild it will trigger the Ultranudge feature. You’ll get a win right away and all the involved symbols will nudge one position down. The streak will continue as long as there are winning symbols and can be pretty lucrative.

Can I play the Jekyllz Wild ULTRANUDGE slot on my mobile phone?

Yes, you can. The Jekyllz Wild ULTRANUDGE slot is available on all Android and iOS devices. It works on instant play platforms, so you can fire it up from any browser and play on the spot. Make sure you have a stable Internet connection and you’re good to go.

Do I need an app to play on the go?

No need for any app or software to play the Jekyllz Wild ULTRANUDGE slot on the go. We already mentioned that it works just fine from any mobile browser. It makes things easier for new players who are not that excited about installing third-party apps on their phones.

How does the Potion Cash feature in Jekyllz Wild ULTRANUDGE work?

Every potion you see on the reels pays like a regular symbol. It’s the 5th-highest symbol in the game, but a very important one since it comes with cash values between 0.2x and 50x the bet. On any spin in the base game or bonus, a potion can turn Dr. Jekyll into Mr. Hyde, collecting all potion cash values in view.

Is there a jackpot in the Jekyllz Wild ULTRANUDGE slot?

There’s no jackpot in the Jekyllz Wild ULTRANUDGE online slot, but that doesn’t undermine the slot’s value. The Ultranudge mechanic and those potions can pay nicely, and you also get a Free Spins Round where wins can go over 6,000x the bet, more than what most fixed jackpots offer.

This isn’t the first time Yggdrasil has used the Ultranudge feature. If you’re looking for similar action, you’ll find it in Jokrz Wild Ultranudge which is more of a vintage slot machine. If you’re a fan of the book, we recommend Jelly’s slot Curious Case of Dr. Jekyll and Mr. Hyde Megaways.