A red-hot volcano-themed game that will take you to a tropical island, Hyper Burst is the latest addition to the rich Yggdrasil Gaming online slot portfolio. The Hyper Burst online... Read Full Review 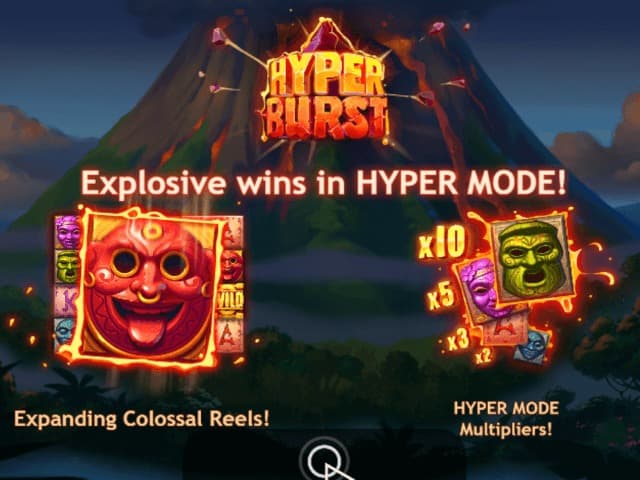 A red-hot volcano-themed game that will take you to a tropical island, Hyper Burst is the latest addition to the rich Yggdrasil Gaming online slot portfolio. The Hyper Burst online slot game makes use of several amazing special features. Thanks to multipliers, colossal reels and other features, you can win up to 12,800x your bet for a huge maximum prize of 1,280,000 credits if you’re lucky.

The Hyper Burst slot has 6 reels in 4 rows as well as 25 fixed paylines. It features the trademark Yggdrasil Gaming gameplay and top visuals with a bit of mystique and magical feel to it. It’s available on mobile devices and PCs, and you can spin the reels of this thrilling slot for free or as a real money game.

Yggdrasil Gaming’s titles are always fun to play and this one is no exception. Players at the top Pennsylvania online slot sites or New Jersey’s best online slot sites can play the Hyper Burst slot machine for real money and try their luck heading for the top prize.

At first glance, nothing looks unusual about the Hyper Burst slot. It’s a standard slot with a 6x4 reel set and Yggdrasil’s crisp, clear graphics. The reels are populated by island symbols and masks of a long-lost culture. In the background, the jungle is topped by a nasty-looking volcano ready to explode.

The stone reels are framed by a bar that fills up to reveal multipliers. In terms of symbols, the wild pays the most – a whopping 100x on a payline for six on a line. The ceremonial masks pay much less – for example, the red one brings you 8x for six of a kind. The card royals pay the least just like in all slots.

Even if you’re a beginner at using online slots game providers, you won’t have trouble with the controls. They are right below the reels and are pretty easy to operate no matter your device.

Yggdrasil’s slot games are made for HTML5 across a range of devices. You can play the Hyper Burst slot on any Android or iOS device. The slot’s controls look good on smartphones and tablets so you won’t run into any trouble when you spin the reels.

How to Play the Hyper Burst Slot Machine

To start the game, you should first place a bet. The coin values start from 0.004 per line which accounts for a bet of 0.10 credits. The maximum bet is 4 credits per line for total bet of 100. Once you’ve set your bet, hit the Spin button to start the action.

The reels will turn with a nice animation. You will win by landing 3 identical symbols across a payline. Wilds substitute any symbol in a winning combination and bring a nice return. During any winning spin in the base game, two of the four middle reels will merge into a colossal lava reel and go for a respin. Respins will continue until there are no winning combinations. With each win, the colossal lava reel will grow in size as well – and it’s even more enticing when you use the best no deposit bonuses available at SlotSource.

When it reaches the maximum size of 4x, the game goes into Hyper mode.

The Hyper mode in the Hyper Burst slot is activated when the multiplier meter is filled to the top with constant respins that fuel the growth of the colossal reel. When it grows to 4x, the volcano explodes and activates the Hyper mode. In this round, you start with a 2x multiplier. Every win that follows triggers further respins and higher multipliers. You can go up to 10x and, if you max out your bet, the Hyper mode can lead to stunning cash rewards up to 12,800 times your stake.

Yggdrasil’s slot games have been known to be pretty lucrative and this slot is no exception. Hyper Burst comes with an average RTP of 96.02% and high volatility. You have to be mindful of your bets with this one, but thanks to the colossal reels, you will win nice rewards frequently. The maximum winning potential of the Hyper Burst slot is 12,800 times your stake, for a maximum payout of 1,280,000 credits at the top bet level. That’s not bad considering the average RTP, and it’s even better if you use the best slots bonuses to get underway.

Yggdrasil Gaming has struck gold once again with this fun lava slot. The Hyper Burst slot machine does not have a free spins round, but its colossal features can bring cash to patient players. The respins and special features are the name of the game in this one. If you’re lucky and go on a respin streak, you can win nearly 13,000 times your real money slots bet. Play the Hyper Burst slot for real money now and make the volcano burst to get your hands on red-hot rewards.