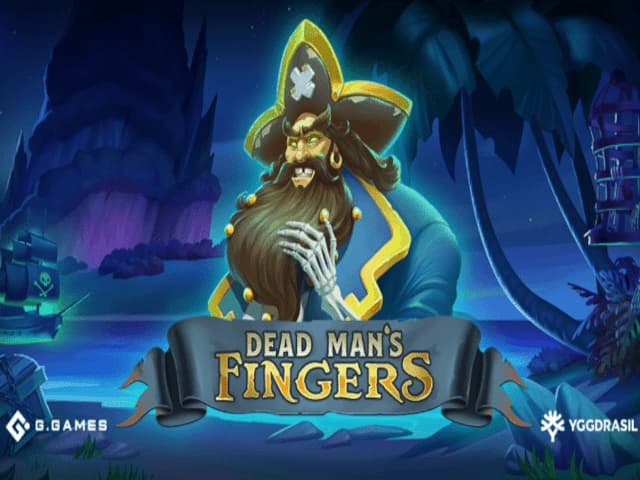 Developed by Gluck Games for Yggdrasil’s platform, Dead Man’s Fingers is a new pirate adventure you’ll surely love. The slot comes packed with a few exciting features, including the Coin Collect feature and four fixed jackpots. While the RTP is lower than expected at 95.20%, Yggdrasil has offset it with medium to high variance as well as rewarding gameplay starting with the base game.

The Dead Man’s Fingers slot is a 25-payline underwater bonanza where you hunt for a dead pirate’s treasure. Dig the seafloor up for a variety of valuable gemstones and four jackpots. On your path to the hidden dead man’s treasure, you’ll meet underwater creatures such as a wild octopus. You’ll also see pirate paraphernalia in a great-looking slot game that can pay almost 3,000x your wager.

In terms of layout and design, Dead Man’s Fingers isn’t unusual at all. You get a 5x3 setup set somewhere in the tropics on a secret location that’s obviously been used as a pirate cove to store treasure. On the right, there’s a cage with a long-dead pirate, while on the left you’ll see a boat flying the skull’n’bones flag high.

The reels themselves are populated by rare gemstones, a compass, the pirate in question, his dead hand, underwater creatures, and locked chests. The Money Collect Symbol features the Dead Man’s Fingers in question and play a big role in the jackpots.

As expected out of a Yggdrasil release, the slot looks and sounds great. It provides an immersive experience across 25 paylines and will be well received by new and experienced players.

The slot was produced on the HTML5 platform, meaning it’s easily playable via mobile devices. You can give it a try on your Android or iPhone via a mobile browser without needing to download the best slot app.

How to Play the Dead Man’s Fingers Online Slot

To start playing the slot, you’ll need to place a wager. You choose between €0.25 and €100, a range-wide enough for all types of players. Hit the Spin button when ready and the adventure begins.

Dead Man’s Fingers is a pretty straightforward slot without any unnecessary complex features. You’ll be hoping for five-of-a-kind wins that can be boosted by Wilds. The Pirate Captain is the Wild that can appear stacked or in 1x2, 1x3, and 1x4 sizes. It can obviously lead to big wins if it appears stacked or bigger than its original size.

There’s another Wild too in the Dead Man’s Fingers slot – the Octopus. It plays the standard role of a Wild and appears on the middle reels only. The real big wins can be hit with the jackpots or by hitting it big in the Free Spins Round.

The first slot bonus you’ll come across in the Dead Man’s Finger slot is the Money Collect feature. It occurs when you land the Skeleton Hand on reel 5 along with Treasure Chest symbols on the other reels. This will do one of two things – either it’ll rain Money symbols with values from 1x to 20x or the Mini, Minor, Major, or Grand jackpots. They have fixed values ranging from 50x to 1,000x your stake.

Three Compass Scatters will give you 10 free games. The Free Spins Round plays just like the base game, with higher chances to trigger the Collect feature. Three extra Scatters will retrigger the Bonus Round.

The RTP of the Dead Man’s Fingers slot is only 95.20%. It’s OK for a medium to high volatility slot, although we would have liked a higher number more. The maximum you can hit not counting the jackpots is 2,740x the wager.

Yggdrasil has done a solid job with the no-frills Dead Man’s Fingers slot. It doesn’t have any spectacular features, but the Cash Collect one is more than enough for all types of players. With four big jackpots in two, you could unearth a true pirate treasure. Play the Dead Man’s Fingers slot at the best Pennsylvania slot sites and top-rated New Jersey online casinos.

The Dead Man’s Fingers slot was published by Yggdrasil Gaming. It’s one of the biggest names in the slot industry and the studio that brought you all those Vikings slots.

Dead Man’s Fingers’ volatility has been set to medium-high. It’s not an extremely volatile slot, but we would be careful with our wagers.

How many paylines does the Dead Man’s Fingers slot have?

The slot’s action takes place on a 5x3 reel set with 25 fixed paylines.

What’s the minimum wager I can place on the Dead Man’s Fingers online slot?

Is there a jackpot in the Dead Man’s Fingers slot?

Yes, there are four fixed jackpots you can hit with the Cash Collect feature. It occurs completely randomly so you only have the luck to rely on to hit them.

Can I play the Dead Man’s Fingers slot for free?

Yes, you can. The slot is available for free to most players excluding at the best casino sites.

Is the Dead Man’s Fingers slot available on mobile devices?

Yes, it is. No need to download any app to play it – just open your favorite casino via a browser and play the game.

How do I win big in the Dead Man’s Fingers slot?

Winning big requires a lot of luck. It can come with the Grand jackpot worth 1,000x your wager or via the free spins round where the winning potential is higher.

Which slots are similar to Dead Man’s Fingers?

When was the Dead Man’s Fingers slot released?

The Dead Man’s Fingers online slot was released on January 31, 2022.