Although the Zeus 1000 online slot machine is part of a series of games based around the same Greek god, it’s only the third in the series, not the one thousandth. The name comes... Read Full Review 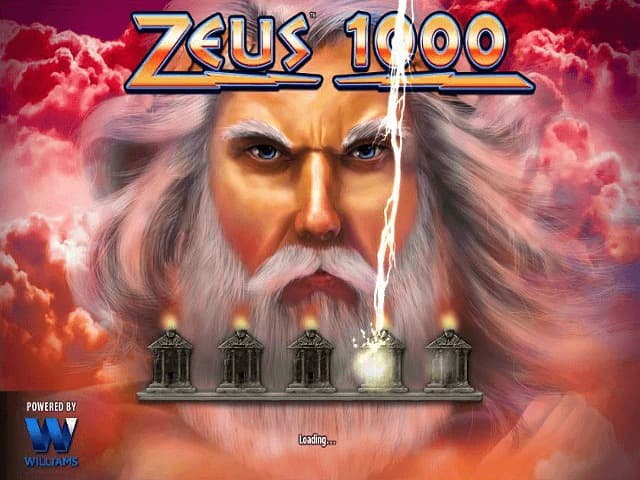 Although the Zeus 1000 online slot machine is part of a series of games based around the same Greek god, it’s only the third in the series, not the one thousandth. The name comes from an amazing feature that can see a total of up to 1,000 high-paying symbols of Zeus added to the reels over the course of a free spins bonus round.

That’s not the only special thing about this game. Far from it, as even in the base spins you play across 2 sets of reels, one featuring a conventional 4 rows of symbols, and one being a Colossal set, with 12 rows. It all adds up to an impressive 100 paylines, giving you some great winning chances in each and every spin.

Zeus 1000 also has wild symbols that help to complete combinations across the reels, with stacks of wilds on one set transferring to the other. It’s a fairly complex setup, which novice players might find a bit too much, but if you have played slots before, it’s a potentially rewarding arrangement. You can play the Zeus slot machine from WMS on iOS and Android smartphone and tablets, plus PCs and laptops at some of the highest regarded online casinos.

There’s up to 25,000.00 to claim if your're playing for real money when the ancient gods see fit to land across the reels in the perfect combination. Read on to discover how to get Zeus on your side when you play the Zeus 1000 online slots game.

Load the game up on your PC, Android, or Apple-powered device and you see blue reels against fluffy white clouds, where the gods of ancient Greece ruled over their subjects. The symbols include playing card icons, as well as images inspired by the rest of the Zeus range. Helmets, vases, vases, chariots and Pegasus, the flying horse all make an appearance.

The graphics have been upgraded from others in the series, with the symbols being a little more realistic, although still not exactly state of the art. It looks quite impressive though, especially with the Colossal reel set to the right side of the screen.

You play with 50 coins, for a starting bet of 0.50 per spin. It’s easy to raise your stakes from there, using simple arrow buttons on the control panel, with a maximum of 250.00 putting the Zeus 1000 within range of virtually all players. It has average returns of 96%, which is more than most land-based casinos, with their far higher operating cost than online sites, can offer.

Another clear advantage of online games over their land-locked equivalents, is the vast range available at the top Pennsylvania online casino sites and the best New Jersey online casinos. Physical casinos are limited by their floor space, and players can often flock around the most popular games, meaning that you can’t even get to them. That’s not the case online.

You can also vary the volume of online games, but the cheerful soundtrack of the Zeus 1000 slot machine goes nicely with the style. Other control options include an Autospin mode. Take a look at the payout table by clicking a button to the left of the reels, and you see how much each symbol pays out when crossing any of the 100 lines, starting from the left side.

The imposing temple of the gods pays the same as Zeus, but is also a wild symbol, which substitutes for others if needed to complete a winning sequence. If the wild fills all 4 rows on a reel on the left-hand set, they transfer to the equivalent reel of the Colossal set. That won’t necessarily create a new win for you, but as we played the Zeus 1000 online slot, we found that it very often will.

A symbol of Zeus holding a bolt of lightning is a special scatter symbol that appears on both sets of reels. It’s also a wild symbol when seen on the Colossal reels. If it’s seen on reels 1, 3, and 5, of either set, the gods reward you with free spins.

During the free spins, Zeus becomes even more generous with his godly powers, as stacks of wilds on the left-side reels see up to 1,000 ‘Zeus Add’ symbols added to the reels of the Colossal set. That can lead to some spectacular wins before the round ends. Something that probably won’t be needed, but is nice to have, is a guarantee that you will get a prize of at least 10x your stake during the free games.

If you have played any other games in the series, then you will love the Zeus 1000 slot machine. But it’s aimed at anyone who likes the ancient Greek theme, which is one of the most popular topics of all. It’s no wonder that it has become one of the biggest hits in the whole WMS range.

The unusual style could make it too complex for inexperienced players, in which case, try the original Zeus slot machine from WMS, which is a far more conventional game. For the rest of us, head over to a recommended online/mobile casino in Pennsylvania or New Jersey to pick up a huge welcome bonus and meet the greatest god of ancient Greece.