Take a trip back to a time when bold knights protected the King and Queen of the land from danger, with the Black Knight online slot machine from WMS. Crowns, scepters, shields an... Read Full Review 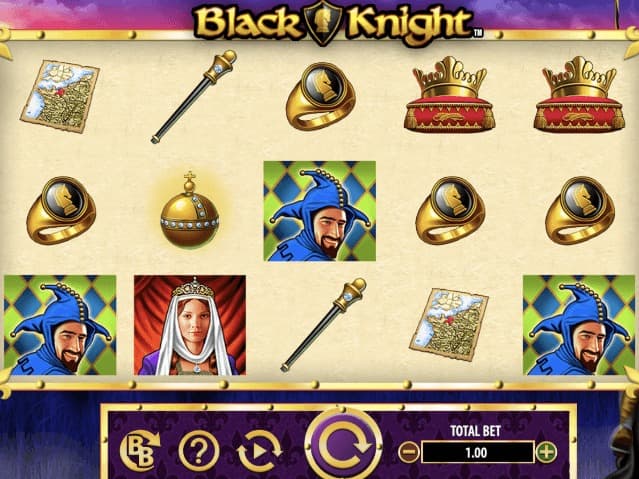 Take a trip back to a time when bold knights protected the King and Queen of the land from danger, with the Black Knight online slot machine from WMS. Crowns, scepters, shields and gold rings appear across the five reels of this 30-payline game. The crown jewel of the Black Knight slot is an exciting free games round where you get a big boost to your odds of landing winnings.

Launched back in 2011, the Black Knight was an immediate hit, and despite the years, it’s remained a popular game with players who like the style and drama of Ye Olden Days. The technology behind it is right up to date and you can play this slot on a PC, Android, or iOS mobile, so there is no need to joust with other gamblers to get to this game at a land-based casino.

Whether you play the Black Knight slot on a desktop or mobile platform, the style and features are identical. The wide bet range and chance to win up to 500x your stake, or 75,000.00 at the highest bet level, are also the same.

While some slots are aimed at beginners and others at highly experienced players, the Black Knight slot machine from WMS has something for all. The age shows in the relatively basic graphics, but it still has enough design flair to get away with it and looks good on Android and iOS phones, tablets and desktop computers.

It’s very easy to set up, which makes it a good introduction to playing for real money. Just select your bet level, which can run all the way from just 0.30 to 150.00 per spin, and you are away. Don’t worry, as there are plenty of options between these extremes, so whatever your budget, there is bound to be a level that matches it just fine.

If you want to relax and watch the reels spinning on their own, or speed things up, then the Black Knight slot has it covered, with Auto and Fastplay modes available. These are just as easy to trigger, using simple on/off controls.

You win by matching symbols from left to right across any of the 30 paylines, without a gap in the sequence. Click the Help/Pays button below the reels to see what each symbol is worth, expressed as multiples of the amount wagered on each line. Taken as a long-term average, the Black Knight slot machine pays back just under 95% of all wagers as winnings, which is more than most land-based sites, with their far higher running costs, can manage.

The symbols sit within a golden frame, topped of with the game title and a view of the royal castle in the background. It’s simple, but very effective at bringing the Medieval style to PCs and mobiles at the best Pennsylvania online casinos and recommended New Jersey online casinos. Although most slots, especially those launched a number of years ago, use playing card symbols, Black Knight was ahead of its time, and all are linked to the topic.

The items of jewelry, a map of Medieval France, and the court Jester pay the low to middle-value prizes, with the Queen and King returning the highest rewards. Find favor with His Highness on three, four, or all five reels and you win 10x, 50x, and 100x your bet respectively. Multiple winning combinations are added together. In the unlikely, but very welcome chance that the King fills all places on the reels, you win a massive 2,250,000.00 when you have 150.00 staked on the spin.

The heroic Black Knight rides onto the reels of his game, bravely acting as others if he can then complete a sequence of matching symbols. The Knight isn’t worth anything on his own though, but in his role as the wild symbol, you should land plenty of extra winning combinations.

He won’t be able to replace the bonus scatter symbol, which is a black shield against a purple backdrop. Any three or more scatter symbols will trigger a free spins bonus round. The Black Knight becomes even more valuable during the bonus games, as he expands right across any reel he lands on. This has the effect of making it much more likely that the wild symbols will be seen in the right places to create winning lines.

If the graphics of the Black Knight online slot are just a little too old-fashioned for you, WMS has the perfect answer. It’s been such a hit for them that you can now play Black Knight II, a more recent game with similar features but uprated imagery that makes it look absolutely stunning across desktop PCs and mobiles.

The original remains popular, thanks to the charming style, ease of play, high winning potential, and proven features. It’s a medium volatility game, so you should see a decent frequency of wins, and competitive prize values.

Black Knight joins a vast collection of WMS slots, along with games from multiple other developers at some of the best online and mobile casinos. The fact that online casinos can carry far more games than physical sites, with their limited floor spaces, is yet another reason why internet gambling is now the established way to enjoy these games.

Our approved online casinos even have welcome bonus packages waiting for new customers. Sign up, claim extra funds and free spins, then help the Black Knight on his quest for winnings.