Let's Get Ready To Rumble Slot

Themed around boxing, and starring the real voice of MC Michael Buffer, the Let’s Get Ready to Rumble slot game by Relax Gaming is now available at online casinos that feature th... Read Full Review

Play Let's Get Ready To Rumble for Free Now! 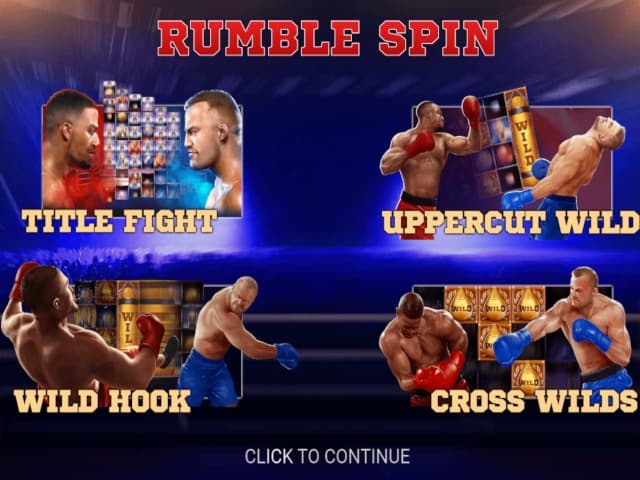 Themed around boxing, and starring the real voice of MC Michael Buffer, the Let’s Get Ready to Rumble slot game by Relax Gaming is now available at online casinos that feature the Relax Gaming range.

It’s a 6-reel slot, with 466 different ways to line symbols up for a win. Like most games from this popular developer, it’s filled with bonuses, including four different instant features, stacked wilds and re-spins of the reels.

To make sure players of any skill or experience can enjoy this game, there’s a user-friendly set of controls that anyone will understand. Click on the icon of stacked coins to open up the bet options, which runs from just 0.10 to 100.00 per spin in real money. The double arrow button speeds up the gameplay and the arrow in a circle activates an automatic spins mode.

The symbols are in a 6x4 grid, set within a boxing ring, and you win smaller prizes when items such as the bell, or gloves land across the reels from the left side. The boxers are worth more, and Michael Buffer pays the most, with a prize of 4x your bet heading your way when he lands on all 6 reels.

Be sure to take a look at the paytable, which is accessed via the 3 lines icon on the control panel. This shows you each possible payout at your chosen stakes, along with how the features work.

Let’s Get Ready to Rumble Online Slot on Mobiles

The Let’s Get Ready to Rumble slot from Relax Gaming is available in desktop and mobile formats. If you play on an Android, iOS, or Windows smartphone or tablet, you’ll find that it works just as well across any device, whether you access it through one of the best new slots sites or any of the best in New Jersey or Pennsylvania.

Gameplay Features of Let’s Get Ready to Rumble Online Slot

This is a low to medium volatility game, so you can land frequent wins. The bandages, bell, gloves, and belt tend to create more combinations that the boxers and MC. The Let’s Get Ready to Rumble slot machine has an excellent soundtrack that adds to the boxing theme, accompanied by the voice of Michael Buffer.

While the standard gameplay can be quite rewarding, it’s the bonuses that make it such a popular game. A Rumble Spin can occur at any time and activates 1 of 4 special modifiers. You could benefit from 3, 4, or 5 extra wilds placed in random places, or all of reel 6 can turn wild. In the Right Hook modifier, the stacked wilds shift from the right-side to reels 2, or 3, where it’s more likely that they create a win. With the Title Fight feature, 2 extra rows are added to the game for the next spin, and you now have 1,436 ways to win.

There are also 2 further features to help out. The Wild Stacks bonus sees between 2 and 5 reels turn fully wild, which almost guarantees a few winning sequences across the game. With the Sticky Spin bonus, winning symbols lock in place as the rest of the reels spin again. If more examples of the triggering symbol appear, these also fix onto the reels for another respin, and it carries on until no new examples of the triggering symbols appear, or all of the reels are filled with it.

The low to medium volatility means that maximum payouts can be less than in higher variance games. The most you can win is 2,389x your stake, which is still pretty good. Like all Relax Gaming slots, the Let’s Get Ready to Rumble slot machine has high average returns. Overall, it pays back 96.14% of bets as winnings.

Our Verdict on Let’s Get Ready to Rumble Online Slot

You probably need to enjoy boxing to get the most from this game, although there are enough bonus features to make it worthwhile for even non-fans to take a look. We found that the in-game modifiers kicked in quite often and managed to get some decent wins from them.

Not everyone has heard of Michael Buffer, but we’re all familiar with Rocky Balboa, and there’s a Playtech slot based on the classic Stallone movies. Get into the virtual ring with these and hundreds of other slots when you register at the best online casinos.