Any mention of the word dinosaurs will often conjure up images of giant, terrifying T-Rex chasing people around, or vicious creatures fighting to survive in the heart of a jungle. ... Read Full Review 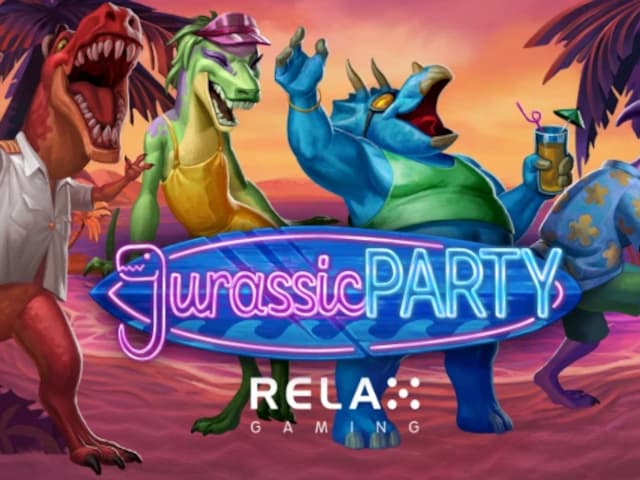 Any mention of the word dinosaurs will often conjure up images of giant, terrifying T-Rex chasing people around, or vicious creatures fighting to survive in the heart of a jungle. Well, Relax Gaming is looking to change that perception with the Jurassic Party slot game. In this slot, the dinosaurs are found relaxing on the side of a tropical island, swigging cocktails and catching some rays. It’s a fun and fresh take on the genre that is complemented by some great slots bonus features. Let’s take a more detailed look at everything the title has to offer in this Jurassic Party online slot review.

The overall theme of Jurassic Party is a lot of fun. The slot is set on an idyllic island that looks like it could have been taken straight from a travel influencer’s Instagram page. There is a little hut serving cocktails, some deck chairs, and a beautiful body of water filling the rest of the landscape. It’s a far cry from what you might expect from a slot with Jurassic in its name.

The dinosaurs you meet in the title also tie in with this laid-back vibe. You will see all the standard species of dinosaurs, but they look much more relaxed than usual. A brontosaurus is sporting a pair of cool sunglasses, while a T-Rex looks to head up the party, donning a full sailor’s uniform. The lower paying symbols are represented by eggs from the various species, each of which is easily identifiable thanks to its color and its dress.

How to Play the Jurassic Party Online Slot

Relax Gaming has kept the party going here with some really fun gameplay. The slot uses the Cluster Pay mechanic, meaning that there are no traditional paylines. The party happens on a 7x7 grid, with payouts being rewarded for clusters of five or more. Like most top online slot games that feature Cluster Pays, the Jurassic Party slot also utilizes a Cascading Wins mechanic. Whenever winning combinations are formed, the symbols from the cluster disappear and new symbols drop into their place. To help boost winning chances, any wilds that land will stick to the reels until they are used as part of a winning cluster.

To get all of this started, players simply need to select their stake and hit the spin button. The wagering range here is fairly average, with players being able to wager between $0.10 and $50. Autospin feature in case you want to sit back and soak up the rays while the reels do the hard work.

If you want to head out onto your own little beach and spin the reels of the Jurassic Party slot game, then you can. The title has been developed using HTML5 technology, ensuring that it runs across different devices and platforms. With most top new slot sites now offering mobile gameplay, players should have no issue finding somewhere to play the slot.

The real money slot really doesn’t let up when it comes to its bonus features. Landing three of the game’s Logo Symbols will launch the Bonus Spins round. When the round is launched, players get seven free spins to use, as well as their choice of a modifier for the duration of the spins. Every additional Scatter Symbol that launches the round will reward players with one extra modifier choice.

The modifiers include a standard symbol turning Wild or becoming Expanding, additional Sticky Wilds being added to the grid, extra spins, an extra pick, or an upgrade of one lower paying symbol into its higher-paying counterpart. Landing one more Scatter in the round will reward an extra spin, while two will provide another modifier pick.

If you just miss out on three Scatter Symbols, then the game does compensate you a little bit. Landing two will trigger a respin where two of the modifiers are activated at random. Players can also use the Mega Bet function to boost their chances. This requires a 50% stake increase but rewards an extra pick during the Free Spins bonus.

Depending on your location, you may also be able to use the Buy Bonus feature. This allows players to buy their way into the Bonus Round for 80x their stake. Players can spend even more to get extra picks in the Bonus Round.

The underlying numbers for the Jurassic Park slot are also nice and strong. The slot has an RTP of 96.47%, which is higher than the average. This can even be given a little boost up to 96.51% if you use the Mega Bet function. The maximum win in the slot is 20,000x the player’s stake. With numbers like this, it should come as no surprise that the game is considered highly volatile.

Relax Gaming never fails to deliver, and the Jurassic Party slot is another top effort from the team. The slot has a fantastic design that really makes it feel unique, and the bonus features do a great job of boosting the overall gameplay experience. The Super Bet and Bonus Buy options also give players some control over the way that they choose to play the slot. The RTP and maximum wager are also solid. On the whole, this is definitely a slot worth checking out at your favorite top Pennsylvania online casino and the best New Jersey online slot site.

Who made the Jurassic Party online slot game?

The Jurassic Party slot was developed by Relax Gaming. Relax is a well-respected developer with a selection of top online slot games underneath its belt. You can check out our reviews of various Relax Gaming slots elsewhere on the site.

Is there a Jurassic Party jackpot to win?

No. There is no jackpot available to win in the Jurassic Party slot game. There is, however, a 20,000x the player’s stake maximum win that can be secured. This can be won through the Bonus Round.

Can I buy a bonus in Jurassic Party?

Yes. However, this will depend on your location, with some governing bodies preventing this. If you can, then buying your way into the Bonus Spins is going to cost you 80x your stake. To have an extra pick in the round, then it will cost 120x.

How many paylines are there in Jurassic Party?

None. The Jurassic Party online slot game doesn’t use a traditional payline or ways to win mechanic. Instead, it uses a Cluster Pays system. This means that whenever symbols land in clusters or five or more, you will get a payout.

Can I play the Jurassic Party slot game for free?

Yes. Though, this will not be possible in all locations. In some territories, playing demo versions of slots is prohibited. In others though, it will be possible to take the slot for a spin before you play for real money.

What is the Wild Symbol in Jurassic Party?

The Wild Symbol in Jurassic Party is represented by a Cocktail Glass with the letter “W” on it. Whenever a Wild Symbol lands on the reels, it will stick there until it is part of a winning combination. Multiple Wilds can be sticky at the same time.

What is the Mega Bet option in the Jurassic Party slot?

The Mega Bet feature allows players the chance to wager 50% extra of their stake in order to be granted an extra modifier pick when the Free Spins Round is launched.

How do I trigger free spins in Jurassic Party?

The Jurassic Party Free Spins round is launched when players land three or more of the game’s Scatter Symbol. The Scatter is the game’s Logo Symbol. When the round is launched, players get seven spins and one feature pick. The feature will remain active throughout the slot.

Where is the best place to play Jurassic Party?

The Jurassic Party online slot game can be played at a number of top online slot sites. To find an online casino that suits your needs, you should check out our detailed online casino reviews elsewhere on the SlotSource site.

How much do I need to wager to play the Jurassic Party slot game?

The minimum wager that can be placed in the Jurassic Party online slot machine game is $0.10, while the maximum wager is $50. The Mega Bet feature mechanic can be used to allow players to wager $75 on one spin.