Slot world, meet the Flodders. Red Tiger's free slot game Flodder is based on a cult film from the Netherlands first released in 1986. The comedy film follows a lower-class family that ... Read Review 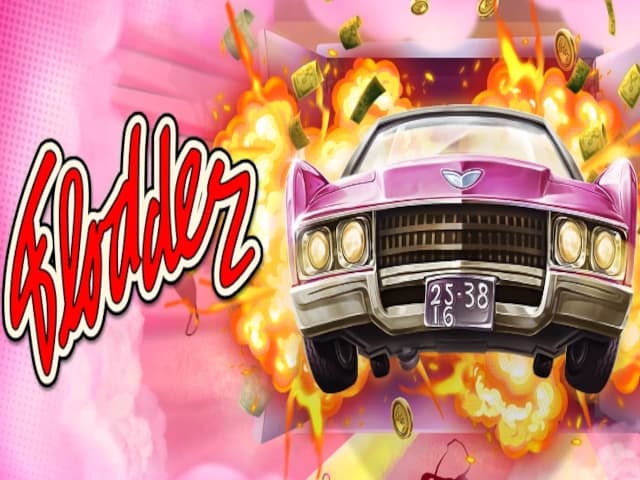 Slot world, meet the Flodders. Red Tiger's free slot game Flodder is based on a cult film from the Netherlands first released in 1986. The comedy film follows a lower-class family that moves into an upper-class neighborhood as part of a social experiment. You can guess the chaos that ensues. The movie was quite controversial at the time and viewed as a political satire of the Dutch welfare system. Nevertheless, it gained a cult status and inspired two sequels in 1992 and 1995. And no, Hollywood has not adapted it. Yet.

The Flodder slot follows the dysfunctional family and their anti-social behavior. The movie’s tongue-in-cheek comedy is perfectly captured on the reels, and Red Tiger’s cartoonish graphics make the slot even more exciting.

This isn’t just a great-looking slot. Specs-wise, it has 25 paylines paired with medium to high variance and an RTP of 95.75%, good enough for wins up to 6,500x the stake.

The slot has a 5x3 setup showing all the funny characters from the dysfunctional family. The reels are set against their house in the upper-class neighborhood, which has been given a Flodder overhaul in the form of a bra on the mailbox and other tiny details. Red Tiger has paid attention to detail in the best way possible, and we can safely say that the graphics and animations are top-notch.

It’s clear that the character symbols pay the most. The Grandma is top of the hierarchy, awarding 50x for five on a line. The others include Zoon Kees, Dochter Kees, and Johnnie, paying a bit less. A quadrant of card royals is the low-win symbol. Additionally, the game has 4 Wilds – one of them is live in the base game, while the rest appear in the free spins slot bonus only.

A pink Cadillac is the game’s Scatter.

You can spin the Flodder slot on any mobile device running on Android or iOS. You don’t need the latest iPhone for it. Just open your favorite casino from a mobile browser and spin it on the spot.

Stakes go between $0.10 and $10 per spin in the Flodder real money slot, good enough for most players. You can adjust the wager to what you see fit from the lower-left corner, right next to the Autoplay button. When you’re ready, the Spin button is in the right lower corner. The base game isn’t exactly flooding with features, featuring pretty straightforward action on each spin.

The Grandma Wild can step in to complete winning combinations, but there’s no entertainment beyond it. On the other hand, the Free Spins Round is much more exciting thanks to the additional Wilds that spring into action.

Three pink Cadillac symbols will give you 10 free spins and three feature picks. If you trigger the Bonus Round with 4 or 5 Scatters, the number of free games remains the same, but you get 4 or 5 feature picks.

Before the round begins, you get 20 bottles on the screen. There are various modifiers hiding under them, including extra free spins, win multipliers, or the three Wilds:

Depending on your pick, the Bonus Round can be pretty rewarding. The maximum win multiplier is x8, while the Wilds can lead to fantastic winning combinations. The maximum number of free spins you can win is 38 if you pick the extra spins.

There’s another special feature that springs into action in the Bonus Round – Grandpa Flodder. It is triggered by the symbol showing Grandpa with a stick. He waves it in the air to add 2-12 Wilds on the reels, resulting in some pretty big wins.

The Flodder slot RTP is 95.75%, which is perfect for a medium to a highly volatile slot game. The game has 25 fixed paylines and a maximum win of 6,500x the stake.

Flodder is an entertaining slot that does the cult Dutch comedy justice. We’re happy that Red Tiger Gaming picked this film instead of a Hollywood comedy as its next branded slot. The movie deserves a lot more recognition in the West, and this slot may bring it.

You can play it on your PC and on the go in any Red Tiger top Pennsylvania online casino and the best New Jersey online slot site right now. Give it a try and we’re sure you’ll be rooting for the family before you know it!

Who created the Flodder online slot?

Flodder is a branded slot by Red Tiger Gaming based on a popular Dutch comedy movie. It was released in the 1980s and became a cult hit. Red Tiger is one of the biggest providers in the industry, releasing hits such as Piggy Riches Megaways.

Is Flodder a highly volatile slot?

Yes and no. The studio has branded the volatility as medium to high. It pays varied wins, but you can also expect some dry spells. The good news is that the slot has plenty of great modifiers in the Bonus Round that can deliver great wins.

The RTP is set to 95.75%, which is a bit lower for medium to highly volatile slot games. It pays just like you expect a slot of its variance, with some dry spells in between. You’ll have the most luck with the modifiers in the Bonus Round that can easily create massive wins.

How many paylines does the Flodder slot have?

The Flodder slot has 25 fixed paylines. You can’t adjust these, which is great since you’ll always be gunning for the top cash prizes. With a bit of luck, you can hit wins over 6,000x on the 25 fixed paylines.

Is Flodder a Megaways slot game?

No, it isn’t. Flodder doesn’t use a special engine to pay. It uses a good old math volatile math model that can still deliver big wins. With the right modifiers and extra wilds on the reels in the Bonus Round, you can hit pretty big wins.

Can I play the Flodder slot for free?

Yes, you can. The Flodder slot demo is available in any Red Tiger casino that has the game. We recommend trying the slot for fun before you play for real money to see how the features work. Keep in mind that due to current regulations, British players are not able to play any slots for free.

Is the Flodder slot available on mobile devices?

The Flodder online slot was produced on the HTML5 platform. It makes it available on a range of mobile devices, and you can play it on an instant play platform straight from your favorite mobile browser. The layout and design are made to fit any screen size.

Do I need an app to play it on the go?

No need to download any software or app to play the Flodder slot on the go. Just visit your favorite Red Tiger Gaming casino from your browser, find the game, and spin it right away. Any phone released in the past 5 years or so will do nicely.

Is there a promo code I can redeem on the Flodder slot?

We currently have no promo code to share that you can use on the Flodder online slot. Check our site regularly and there might be one to use later, giving you instant access to the Flodder slot from any device.

When was the Flodder slot released?