Enter into the enchanted world of Princess Sakura and her cherry blossom-filled wonderland overloaded with oriental temples, golden dragons, and stunning Asian scenery in the Sakura Fortune slot by Quickspin. This 5x4 ... Read Review 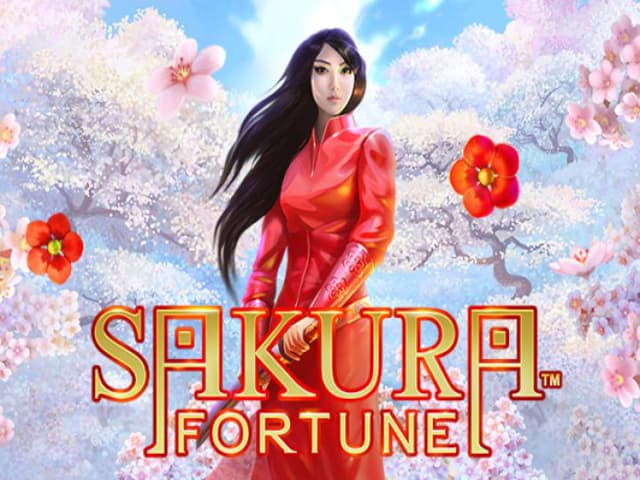 Enter into the enchanted world of Princess Sakura and her cherry blossom-filled wonderland overloaded with oriental temples, golden dragons, and stunning Asian scenery in the Sakura Fortune slot by Quickspin. This 5x4 fairytale of a video slot oozes royalty and sophistication, but it doesn’t come without the possibility of danger or death – and yes there are evil forces lurking! Expect to see plenty of treasure-loaded bonus features such as the Free Spins and Mystery Nudge Features and the Sakura Fortune Respins – if you’re really looking for all that glitters!

The game has been skillfully designed, boasting stunning audiovisual qualities, living up to the very concept of the game. The backdrop is covered from head to toe in gorgeous cherry blossom flowers, and then there’s the striking beauty herself appearing in a gorgeous red ensemble, along with a number of oriental artifacts making an appearance across the grid throughout the game. Go on an Oriental adventure at our recommended New Jersey online slot sites and top Pennsylvania online casinos and help Princess Sakura to fight for the biggest reward!

The mighty but magical quest all pans out across a 5x4 grid and oozes 40 completely different routes to recovering the hidden riches. Expect to enjoy your own oriental fairytale, where you can wager bets starting from as low as 0.20 and increasing to 100.00 in your chosen currency – but the bigger the better since this mission means you’ll be running up against the evil emperors of the past.

In terms of the paying symbols within the game, the Emperor symbols offer the highest payout, and not following so far behind him is the Princess. The Princess also appears as the Scatter and Wild symbol, as well as a Warrior Prince and Chinese ruins which appear somewhere in the middle in terms of the payouts. In order to be in with the chance of scoring a payout, players would need to collect between 3-5 symbols, as part of a winning combination. The Emperor pays 10x the bet for 5, the Princess pays 5x the bet for 5 and the Warrior Prince pays 3x the bet for a total of 5.

How to Play the Sakura Fortune Slot

This Ancient Asian adventure is the epitome of user-friendly. Adjust the wager by hovering over the “Total Bet” tab where you can increase or decrease your bet as you wish. To then get started, locate the Spin button, which is at the bottom right-hand corner of the screen.

Like most new online slots, the Sakura Fortune slot can be played across any of your chosen devices, including mobile smartphones, tablets, desktops, and laptops, and works in support of devices powered by Windows, iOS, and Android.

The Princess contains an infinite power within the game, as she has not only been chosen for the throne but also to take the place of both the Wild and Scatter symbols, meaning that she can replace the majority of regular symbols appearing on the screen. The Princess, as a symbol, appears as a Stacked Wild on reels 2,3, and 4 where she will start to work her magic.

In the event that 2 stacked Princess Wilds land, this will introduce the Nudge Feature into the mix. The Nudge Feature becomes activated at random, you’ll notice stacked Wilds will fall into place and will begin to fill the entire reel, having a ripple effect as it then has the power to launch directly into the Sakura Respins.

The Sakura Respins Feature is highly dependent upon the number of Stacked Wilds appearing during the feature and will continue to award respins until the appearance of wild symbols draws to a close.

The Sakura Fortune Scatter Symbol will appear as a hand fan, where landing three within the same symbol combination will launch the Free Spins Feature, awarding an extra special 5 Free spins, where players will see the Princess symbols expand, covering the reel as a result. What’s more, the Wilds will eventually become Sticky and will award an extra free spin on top of those that have already been awarded.

The Sakura Fortune slot has been boosted by Quickspin’s new Achievement mechanic, a new concept introduced, offering a whole host of in-game reward features, which can award even more spins and wins throughout the game.

The maximum payout potential in Sakura Fortune is considered very high, with the maximum being 1023x the stake, which is quite surprising since the volatility of the game is actually considered to be quite high. Aside from this, the Return-to-player (RTP) is capped at a rather fair 96.58%.

The Sakura Fortune slot is a stunning creation indeed backed by Quickspin’s genius reward mechanic, and let’s face it – who doesn’t love the potential to make way for even more rewards? The bonus features are fairly typical but do offer a fair amount of opportunity to win some great real money wins. It’s unfortunate that the game’s payout potential is incredibly low, for a high volatility slot, which is the only major downfall. If you enjoyed Quickspin’s Sakura Fortune slot, then we’re more than sure that you will love the Tale of Kyubiko slot by Play’n GO – which offers a different take on the ancient oriental folk tales.

Who is the slot game provider for Sakura Fortune?

What’s the maximum payout to be expected when playing Sakura Fortune?

The maximum payout that can be achieved when playing the Sakura Fortune online slot is 1023x the stake – which is considered relatively low for an online slot machine that is considered to be high volatility with a high return.

Is the Sakura Fortune a high-volatility slot?

The Sakura Fortune video slot is a high volatility slot, offering a decent return to player percentage, which is slightly refreshing given the low maximum multiplier win which is on offer.

Is the Sakura Fortune slot compatible with all devices?

Yes, it is! The Sakura Fortune online slot machine game can be enjoyed anywhere across all devices, such as smartphones, laptops, desktops, and tablets - meaning that you can make the most of your mobile gaming experience from wherever you choose.

Can I play the Sakura Fortune slot for free?

The Sakura Fortune video slot can be enjoyed for free or can be played with real money at many top online slot sites, where there are plenty of real cash prizes up for grabs!

How many paylines are there in the Sakura Fortune slot?

The Sakura Fortune slot contains 40 fixed paylines, all of which have the potential to reward heavily for winning combinations that have been formed.

What’s the RTP for the Sakura Fortune slot?

The Sakura Fortune slot contains a default Return-to-Player (RTP) of 96.58%.

What paying symbols will I find when playing the Sakura Fortune slot?

The Sakura Fortune slot contains a range of high and low-paying symbols, all of which are very intriguing in appearance, along with the standard letters, playing cards, and a princess Wild and Scatter symbol.

What Bonus Features will I find when playing the Sakura Fortune slot?

The Nudge Feature, Free Spins Feature, and Sakura Respin are all equally rewarding bonus features to trigger throughout the game.

When was the Sakura Fortune slot released?

The Sakura Fortune slot was released in April 2017.