Ravens are usually an omen of something horrible, but in Norse mythology, they were Odin’s messengers. The all-seeing ravens Huginn and Muninn travel all over the world, bringing... Read Full Review 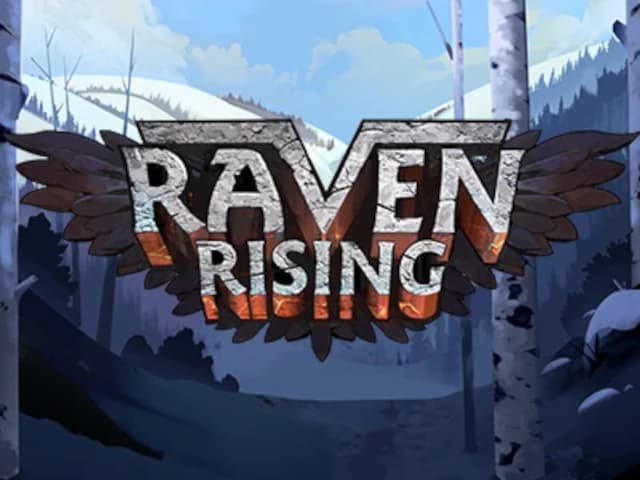 Ravens are usually an omen of something horrible, but in Norse mythology, they were Odin’s messengers. The all-seeing ravens Huginn and Muninn travel all over the world, bringing information to the never-satisfied Odin. They have been brought back for one more fly over the world in Quickspin’s Raven Rising, or—as the developer calls it—a journey from Midgard to Ragnarok.

Norse mythology slots are always fun when they’re filled with action such as this one. Raven Rising was developed by Quickspin and features Odin and Freyja on each end of the reels. It has a familiar 5x3 setup paired with high variance and 20 fixed paylines. While it isn’t a Megaways slot, it’s a tumbling game with a progressive multiplier and special Wilds and Raven Scatters. The base game is set in Midgard, while the Bonus Free Spins Round takes place during the events of Ragnarok.

Raven Rising is a visually impressive slot game that more or less looks like an animated movie. The snow falling in the background is a nice touch, giving it a sophisticated look and feel. A red-haired Freyja and red-bearded Odin flank the reels from left and right, with Huginn and Muninn flying in and out. Quickspin has done a great job with the audio. The reels themselves are set in stone, with heavy blocks depicting Norse mythology warriors including Odin, Freyja, and the mighty Mjolnir hammer.

Odin is the highest-paying symbol here, delivering wins of 75x for five on a line. Freyja follows him before the hammer and axe. The premiums are joined by four low-win card royals carved in stone. There’s a Wild too and a Scatter. When the symbols come tumbling, you’ll see the serpent Jormungandr eating his tail, which is a depiction of the events in Ragnarok, when the world comes crumbling down.

Part of a Series
N

Like most top slot games. the Raven Rising slot was developed on the HTML5 platform. It can be played on all devices including mobile phones and tablets running on Android and iOS, without the need to download apps.

The first thing you need to do before you start playing the Raven Rising slot is set your bet. You can choose between $0.20 and $100 per spin. As soon as you hit the Spin button, those heavy blocks of stone will fall from the heavens and drop with a loud thump on the reels.

As mentioned earlier, Tumbles are in the focus. Every time you win you get new symbols replacing the winnings ones via Tumbles which can go on indefinitely as long as you hit wins. To make things more exciting, the Midgard base game also comes with a progressive multiplier which goes up by +1 on each tumbling win. It has no upper limit, but losing spins reset it back to x1.

That’s all for the features in Midgard. However, the Ravens flying over the reels have spotted a portal to take you to Ragnarok which comes in the form of three or more Scatters.

Three, four, or five Raven Scatters will bring around the events of Ragnarok. You get three, five, and seven free spins respectively, which you can gamble up to 15. However, be careful with the Gamble as you can lose what you have and go back to Midgard. The main difference between the base game and the Bonus Round is the non-resetting progressive multiplier. It seems that Ragnarok is not that bad after all.

Due to the non-resetting multiplier and the fact it has no cap, this can be a pretty rewarding feature. If you don’t want to wait for it to trigger organically, you can buy it for 100x the bet in some jurisdictions. The Bonus Buy feature also takes the RTP up to 96.57%.

The Raven Rising slot RTP is set to 96.07% in the base game, and 96.57% if you buy the bonus round. With a bit of luck and a high enough multiplier in the bonus round, the maximum winning potential is 6,804x the bet.

Raven Rising is not just another Norse mythology in the long string of Odin-themed slots. It separates the base game from the bonus using the concepts of Midgard and Ragnarok and takes regular spinning action further by adding a multiplier to tumbles. It doesn’t reset in the Bonus Round, highlighting its great winning potential that almost touches 7,000x the bet.

If you want another trip through Odin’s nest, Raven Rising is the best vehicle of real money slots.

Who developed the Raven Rising slot?

The Raven Rising slot was developed by Quickspin. One of the biggest studios on the market, Quickspin is known for its Swedish excellence and amazing and rewarding slots. Some of its biggest hits include Sakura Fortune, Sakura Fortune 2, Eastern Emerald Megaways, and Big Bad Wolf.

Raven Rising is a highly volatile slot. It’s not extremely volatile, but caution is advised when you start playing the slot. Be careful with your bets, especially if you have a limited budget. Start small and try to hit a few wins before increasing your wagers if you want to keep your bankroll alive.

How many paylines does the Raven Rising online slot have?

The Raven Rising online slot has 20 fixed paylines. It’s not a Megaways slot despite the tumbles, so don’t expect to see thousands of ways to win. But, nevertheless, the 20 fixed paylines are more than enough for you to hit solid wins at any stage of the game.

Is there a jackpot to hit in the Raven Rising slot?

Unfortunately, the Raven Rising slot doesn’t have a fixed or progressive jackpot attached to it. But it still has great winning potential that almost hits 7,000x your bet. The multipliers in the base game and Bonus Round will ensure that you have plenty of fun.

Is there a Free Spins Round in the Raven Rising slot?

Absolutely. The Free Spins Round is triggered by three or more Raven Scatters. The Bonus Round takes place during the events of Ragnarok, but it’s not the end of the world considering the fact that the multiplier doesn’t reset between spins.

Can I buy the Bonus Round in Raven Rising?

Yes, you can. It will set you back 100x your wager, which ensures three Scatters drop on the reels on the next spin. The Bonus Round starts with three bonus spins which you can gamble up to 15. There’s no option to pay more and get more triggering Scatters with the Bonus Buy feature.

Can I play the Raven Rising slot on my mobile phone?

Yes, you can. The slot was developed on the HTML5 platform, making it easily playable on instant play platforms. You can spin it on your mobile phone anytime and anywhere as long as you have an Android or iOS device and a stable Internet connection.

Should I download a slot app to play it on the go?

No need to download any slot apps to play the Raven Rising slot on the go. You can just visit any Quickspin casino from your mobile phone browser and enjoy the action on the go. The slot fits any screen size perfectly.

When was the Raven Rising slot released?

The Raven Rising slot was released on November 8, 2022.