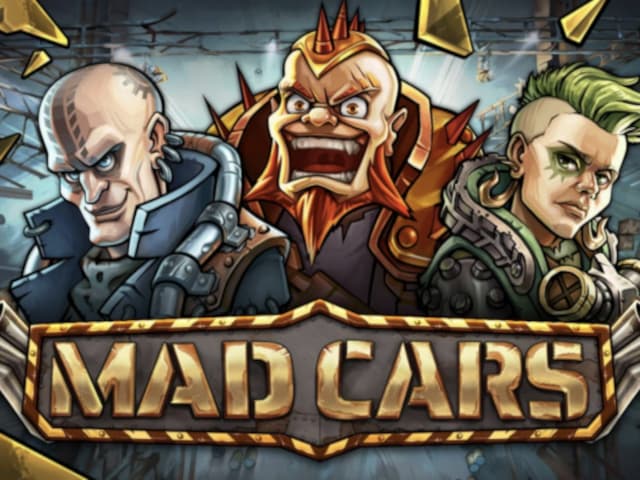 There’s something about slots that are set in post-apocalyptic wastelands that just guarantees quality. Whether it's games like Money Train 2 or Karen Maneater, something about putting a post-apocalyptic twist on a slot just helps to make it all the more interesting. The latest entry into this sub-genre is the Mad Cars slot from the team at Push Gaming. Mad Cars invites players to a dusty old town where the only occupants are a bunch of insane-looking drivers competing for gold. Players then get to spin the reels and see what these maniacs have to offer. Let’s do that ourselves in this Mad Cars slot review.

The dusty aesthetic of post-apocalyptic worlds lends itself well to real money slots. The savagery of the world that Mad Cars occupies is captured perfectly thanks to a great design from Push Gaming. An intense soundtrack complements the action really nicely and helps to set the tone as players jump between different reel sets, triggering bonuses and chasing wins. The characters here strike a perfect balance between being cartoonish and being incredibly sinister. From a visual perspective, Mad Cars is a massive success.

The theme of Mad Cars is one of chaos and confusion, but none of that translates to the gameplay. The slot takes place on an enhanced 5x6 grid, with 50 paylines active on every spin. Clicking the Total Bet button presents the slot’s wagering options. The minimum wager in the game is $0.10, while the maximum is $40, which keeps things budget-friendly. The Mad Cars slot comes with all of the usual bells and whistles, including an Autoplay feature if you want to sit back and let the reels work their magic.

Like most top online slots, Mad Cars can be accessed across a range of different devices and operating systems. The slot will work on both Android and iOS devices, including smartphones and tablets. The game is best enjoyed in portrait mode thanks to the slightly larger set-up of its reel set.

Push Gaming has spared no expense when it comes to the bonus features on offer in Mad Cars. First things first, players will want to acquaint themselves with the Boost Reel, which is an additional row that sits above the reels. This will spin with the rest of the reels, and it can display boost symbols for the Instant-Prize Car Symbols.

Speaking of which, these are symbols that will land on the bottom row of the grid and then advance their way up with the help of the boosters. They stick to the reels unless there are multiple on the grid and one of them crosses the finish line first. The finish line is displayed on the top row.

To advance up the grid, the Instant-Prize cars will need the boosts. The Gas Symbol helps them move up, while Multiplier Symbols can land on the boost reel and help improve the multiplier. There is also a Multiplier and Gas Symbol that can do both of these things. A Survivor Symbol can also be applied to a car, and this ensures it will stick if another symbol passes the line first.

The game also has a special Scatter Car. When this passes the top row, the aptly titled Mad Bonus is launched. When this happens, players start with seven free spins, and five Instant-Prize Cars are placed on the bottom row of the grid, with all other symbols removed.

The Boost Reel is the key here. It works the same as in the base game, only with the addition of four extra symbols and the removal of the Survivor. The Line-Up Symbol will bring all cars into the position of the one highest up the grid, the Persistent Payer will give value to all other symbols while it remains on the reels, while the Persistent Collector collects values from all of the other cars until it leaves the reels, and the Persistent Payer and collect is a combination of both. It is also worth noting that any time a car passes the line, an additional spin is added to the reels.

Finally, at the end of the round, the Mad Race bonus can trigger. When this happens, all cars on the reels cross the line and pay out.

If you don’t want to wait for your car to cross the finish line and want to jump straight into the bonus rounds, then this is an option, with the slot allowing you to buy a Bonus Round with different modifiers active. However, this won’t be available in all territories.

The Mad Cars slot game isn’t just a really fun slot, it is also one that has some great winning potential. The slot is considered highly volatile, and it has an above-average RTP of 96.39%. The game offers players a maximum win of 25,000x their entire stake, which is yet another reason to take this one for a spin.

Push Gaming has delivered a top-quality slot with Mad Cars. The slot boasts a great theme, engaging gameplay, top winning potential, and some innovative bonus features. In short, there is very little to dislike about it. The bonuses may come across as a little complex when you first load the slot up, but they don’t take long to adjust to, and if you can find your way into a Bonus Round when playing, then the winning potential is huge. This is definitely one of our favorite Push Gaming titles and is one well worth taking for a spin at the best Pennsylvania online casinos and recommended New Jersey online slot sites.

Who made the Mad Cars online slot game?

The Mad Cars online slot game was developed by the team at Push Gaming. Push Gaming is a well-respected developer, and you can find reviews of many of its other top online slots such as Fire Hopper, Bison Battle, and Jammin' Jars 2 here at SlotSource.

Is there a jackpot available in Mad Cars?

No. There is not a jackpot, fixed or progressive, available for players to win when playing the Mad Cars online slot.

What does the meter above the reels do in Mad Cars?

The meter above the reels in the Mad Cars slot is called the Boost Reel. It provides boosts to the Instant-Prize Car symbols and helps them get over the line in both the base and the Free Spins and secure wins.

What slots are similar to Mad Cars?

Thematically, there are loads of slots that feature post-apocalyptic wastelands similar to the one in the Mad Cars slot. From a gameplay perspective though, the closest comparison will be Money Train 2, which features very similar bonus features and gameplay.

Where can I play the Mad Cars slot for real money?

The Mad Cars online slot can be played for real money at a range of top online casinos. Players can read through our detailed casino reviews elsewhere on the site to help them find a slot that matches their needs.

How many ways to win are there in Mad Cars?

The Mad Cars slot game has 50 active paylines on every spin. Players can find information regarding the paylines and symbols by checking the slot’s paytable at any time.

What is the RTP of Mad Cars?

The theoretical return to player for the Mad Cars online slot game is 96.39%. This increases slightly when players are in the Bonus Rounds.

Can I play Mad Cars on my mobile device?

Absolutely! The Mad Cars online video slot is fully optimized to work on a range of different mobile devices. The Mad Cars mobile slot game offers the same fun gameplay experience as the desktop version of the online slot game.

How much can I win when I play the Mad Cars slot game?

Is the Mad Cars slot fair?

Absolutely. Push Gaming is a well-respected slot developer that ensures all of its slots use a random number generator to generate the outcome of each spin. If you have any concerns about a casino that is hosting the slot, either check out our casino reviews or head elsewhere.