You either love or hate pirate-themed slots – there’s no middle ground. And, to be honest, developers don’t always try that hard to make them exciting. That’s not the case with Pragmatic ... Read Review 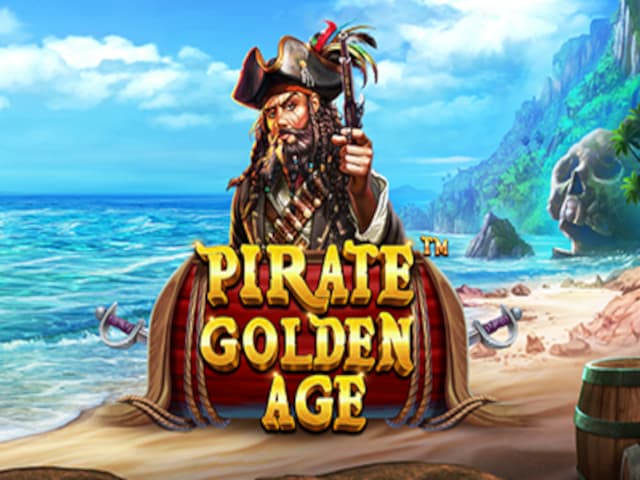 You either love or hate pirate-themed slots – there’s no middle ground. And, to be honest, developers don’t always try that hard to make them exciting. That’s not the case with Pragmatic Play and its latest pirate outing Pirate Golden Age. As the name suggests, it takes place during the Golden Age of Piracy which was in the 17th-18th century.

This particular slot doesn’t namedrop any pirates, but it’s clearly based on the legendary Blackbeard. It has the looks and pirate style and has the specs too. It’s a highly volatile pirate ship with an RTP of 96.49% that sets sail across 20 fixed paylines. Its features include Mystery Symbols in the Bonus Game that can fire the ship’s cannon and blow your wins away. With a bit of luck, you could hit a cash prize worth 3,000x the bet.

If you’re looking to join a pirate crew, Pirate Golden Age is available for fun and real money in our recommended NJ online slot sites and slot sites in Pennsylvania.

The Pirate Golden Age slot doesn’t come with that many modern bells and whistles. The studio has opted for a familiar 5x3 layout and design, and that trademark Pragmatic Play layout that makes it a breeze to play on any device.

As expected, the pirate flag is flying high in this one, so you can guess the symbols. The Captain and two of his mates pay the most - 75x, 50x, and 30x respectively for five of a kind. There’s a parrot and an anchor too, because what would a pirate crew be doing without a parrot?

The slot is easy to play thanks to the intuitively placed controls. Should you need help, the game’s guide is but a click away.

If you prefer to play slots on the go, you’ll be lucky to learn that Pirate Golden Age is fully mobile-optimized. It runs on instant play platforms which means you can play it on Android and iOS devices without downloading any slot apps.

When you fire up the Pirate Golden Age slot for real money, the default wager is set at $2 per spin. You can adjust that between $0.20 and $100 per spin in tiny increments, so set what suits you best and hit the Spin or Autoplay buttons. The first will allow you to go spin by spin, the second lets you spin the reels automatically.

The base game doesn’t have a lot of surprises. You’ll get the best payouts with the premiums and the Skull Wild which plays its usual role. It matches the top-paying symbol should you collect five. This isn’t a slot that banks on the base game, so you can turn your attention to the engaging Bonus Round.

Three or more Scatters give you seven free spins in an exciting Hold & Win-style Bonus Round. You also get a nice payout:

During the Bonus Round, you get a special Mystery Symbol that can land on any reel. When one or more land on the reels, they all transform into the same symbol or Wild. All Mystery symbols are also accumulated in a special meter. At the end of the Free Spins Round, all the symbols come back on the reels – if one or more occupy the same spot, a multiplier is applied. It starts at x1 and rises by +1 for each overlapping spot.

The Pirate Golden Age slot RTP is set to a pretty solid 96.49%. That’s perfect for a slot of its volatility which can pay a maximum of 3,000x the bet. That’s not the most valuable bounty on the high seas, but it’ll do.

Pirate Golden Age is a swashbuckling adventure that doesn’t reinvent the pirate ship’s wheel. It does have a fun Bonus Round, though, which can pay off nicely if you manage to accumulate those golden Mystery coins. You get plenty of potential by landing more of them, although there’s no other factor to rely on than pure luck.

Still, it’s a slot that mixed standard gameplay with a cool feature, and as such, it’s one you don’t want to miss. Check out our collection of the best slots bonuses and go on a pirate-themed adventure now!

The Pirate Golden Age slot was developed by Pragmatic Play. You might know the studio by hits such as Big Bass Bonanza or Wolf Gold. It rightfully takes its place in the pantheon of slot developers with dozens of great slots released so far.

You can place a wager as low as $0.20 on the Pirate Golden Age slot game. It’s a fair minimum wager, although we’ve seen other slots go even lower. Still, you get five spins per $1, which is more than enough for new and casual players.

Can I play the Pirate Golden Age slot on my phone?

Absolutely. The slot was developed on the HTML5 platform, allowing you to spin it on the go via mobile browsers. You can do that anytime and anywhere on Android and iOS devices, but only if you have a stable Internet connection.

Do I need an app to spin Pirate Golden Age on the go?

You don’t need any app or software to play the slot on the go. Just visit your favorite Pragmatic Play slot site, find it in the lobby, tap on Play, and start. It’s much easier to spin it on the go through mobile browsers rather than downloading slot apps.

How many paylines does the Pirate Golden Age slot have?

The Pirate Golden Age has 20 fixed paylines. You can’t adjust them, so you’ll always play for the top cash prizes. It’s liberating and easier to spin slots with fixed paylines compared to all those confusing mechanics with thousands of ways to win.

Yes, it is. We can confirm that dry spells are to be expected in this slot. Make sure not to max your bets out from the moment you start playing. It can be a punishing slot if you’re not careful but can be rewarding if you play responsibly and don’t chase your losses.

Does the Pirate Golden Age slot have a jackpot?

No, it doesn’t. The Pirate Golden Age slot has a lucrative Bonus Round instead. Thank the collection feature and the virtually endless amount of free spins you can claim, it can pay up to 3,000x the bet, more than what some jackpots offer.

How do I get to the Pirate Golden Age slot bonus?

You need at least three Scatters to get 7 free spins in the Bonus Round. The Bonus Round is much more exciting than the base game. A Mystery Symbol collection feature gives you extra spins and Mystery Symbols in random positions that can raise the multiplier value and award top prizes.

The maximum you can hit is 3,000x the bet, provided you get the multiplier up in the Bonus Round. This is a pretty decent win you can hit for a highly volatile slot game, even though it doesn’t have a jackpot.

When was the Pirate Golden Age slot released?

The Pirate Golden Age slot was released on October 6, 2022.