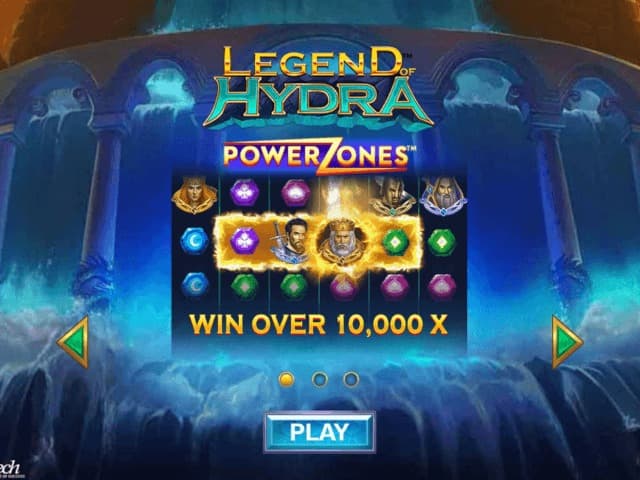 Ancient Greek mythology has always been interesting for slot studios. While most of the slots based on it are based on gods and deities, there are some based on monsters too. Take Playtech’s Legend of Hydra slot by example. It’s the perfect specimen of an ancient Greece-themed slot featuring the four-headed “dragon” as its main antagonist.

The Legend of Hydra slot is one of very few to use Playtech’s trademark Power Zones mechanic. An adventurous slot by itself, it has a total of 15,625 paylines that go both ways. Unleash the Hydra feature for a four-headed monster of a feature that can bring you an inch closer to the slot’s maximum winning potential of 10,000x your bet.

Playtech’s Legend of Hydra online slot is anything but common. It has a rather unusual 6x5 reel set that is set against a majestic background. You’ll see a Greek temple with deep water which give the slot a very distinct theme. The waters behind the reels are not there for no reason – they hide the four-headed monster in plain sight.

In audiovisual terms, Playtech has hit the jackpot. The reels themselves are populated by kings, queens, warriors, wizards, gems, and a gold crown. The gemstones pay less than the characters. Understandably, the king and queen pay the most – 0.7x your bet for six on a line.

You won’t find it hard to play the online slot thanks to the buttons that are easy to reach. If you played a 6x5 slot before, the Legend of Hydra slots game shouldn’t be a problem.

How to Play the Legend of Hydra Slot Machine

Playing the Legend of Hydra online slot is not hard at all. The first thing you need to do is set your bet size. Bets start at 0.10 coins and go as high as 200 coins per spin. Once you’re comfortable with your bet, hit the Spin button to start the action.

The base game itself is very simple. More than three adjacent symbols pay in any direction. You’ll be hoping to land the higher-paying symbols in order to win bigger sums of cash. A gold crown is the slot game’s wild that substitutes any symbol apart from the bonus symbol.

During any spin in the base game, the Power Zones feature can come into play. It can change any symbol on the reels except for the wilds or bonuses. Whenever a yellow circle appears over a symbol, the feature will come into play and activate the so-called Power Zones.

Once active, the Power Zones will freeze in place and the symbols will link horizontally or vertically. If a charged symbol lands into the Power Zone, all symbols in it will change to the same symbol. Thanks to the shifting symbols, the Power Zones feature can be pretty lucrative.

However, the truly big wins appear when the four-headed monster shows its face.

There are four Hydra features with the first one unlocked at the start of the game on any real money stake level. The first Hydra head (feature) adds 11 wilds on reels 2-6. To unlock the other features, you will have to fill the meter above the reels with charged symbols in Power Zones.

The Legend of Hydra slot by Playtech has a solid RTP of 96.48% and a maximum winning potential of 10,000x your bet. Keep in mind that it’s a high volatility slot, so don’t expect wins to land often.

With a total of seven special features and cool graphics and gameplay, the Legend of Hydra video slot is Playtech’s next big hit. It has a pretty solid RTP, great winning potential, and enticing gameplay thanks to the Power Zones.

Play the Legend of Hydra slot for real money and slay the four-headed monster to become the people’s champion. Check out our recommended online casinos in New Jersey or Pennsylvania for the best playing experience.