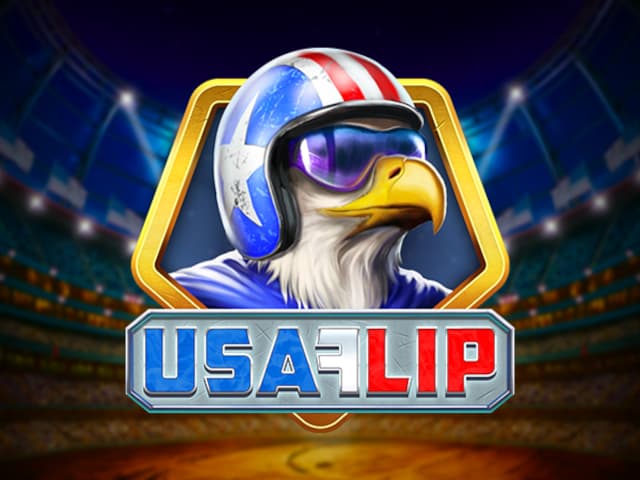 you’ve never played it, you don’t know the fun you’re missing. Dirt bike races are hazardous, yet so popular in the USA, and famous slot developer Play’n GO knows that pretty well. In its slot USA Flip, it does a flip with its dirt bike in a headlong trick that you’ll love spinning round and round again.

It’s a slot that performs the most insane stunts with dirt bike slots, but you won’t see that from the specs. A medium volatile title, the 20-payline USA Flip slot stars an eagle rider on a blue, white, and red bike. It’s as American as they come, so if you’re a fan of bike stunts and the US of A, this one’s a great pick. The slot may offer a maximum winning potential of only 1,000x the bet, but don’t let that fool you – it pays much more often than you’d expect.

The USA Flip slot is available for free and real money in most of our recommended New Jersey online slot sites and PA online slot sites. Read for the hazardous stunts. Stun the crowd with your skills and win the biggest rewards.

Play’n GO’s slots have a certain look and feel to them, and USA Flip catches that vibe perfectly. It’s a regular 5x3 slot with great graphics and nothing unusual when it comes to setup or design. The reels are set in a dirt bike stunt arena, with all the controls beneath them. Surprisingly, the reels can be adjusted between 1 and 20, although we promise you’ll have much better returns when you play on the maximum number.

Symbols include five-card royals which pay less than the premiums. The latter include a dirt bike, helmet, and other stunt-related items. The Eagle is the Wild, paying as high as the top-tier dirt bike. It plays its regular role of substituting for other symbols in winning combinations.

Play’n GO has nailed the looks and audio, immersing you deep into a bike arena atmosphere. You’ll have how the slot sounds and how it looks as well.

You can play the USA Flip slot on your Android smartphone or iOS device without downloading an app. It works on an instant play platform, so you can spin it from any mobile browser.

How to Play the USA Flip Slot

Before you begin with impossible stunts, you’ll need to set a bet. The betting range goes between $0.10 and $100, so there are plenty of denominations for all types of players. It follows the regular Play’n GO formula, so there aren’t many surprises in the base game. The good news is that there are a few in the form of Near-Win Respins and Walking Wilds.

Landing a full stack of matching symbols on the first two reels triggers the first feature, but only on losing spins. Wilds can land stacked too. Whenever active, the feature will respin the middle reel with the others locked in place. If you’re lucky, it can lead to a headlong win.

A full stack of Wilds on the middle reel triggers the Walking Wild feature. When active, the full reel with Wilds will move one spot to the right per respin. This can be a lucrative feature too, especially if the Respins land matching symbols or more Wilds.

Like in most slots with free spins, three or more Scatters will trigger the Free Spins Bonus Round. You get 12 free spins, to begin with, and the reels are flipped at the start – that’s how the slot got its name. The two other special features land more frequently in the bonus. When you activate the Walking Wild, it moves to the left instead of the right. Three more Scatters retrigger the Bonus Round with 12 extra spins. Up to 120 free spins can be won this way, which is more than what other slots offer.

USA Flip is for everyone that enjoys headlong stunts by the craziest bike riders. The eagle rider is the star of the show, never afraid of doing one stunt over another. Your stunt is to flip the reels in the Bonus Round, which can bring great inverted wins. It may not be the highest-paying slot in Play’n GO’s real money slots catalog, but it’s plenty of fun, and that’s all that matters.

Who developed the USA Flip slot?

The USA Flip slot was developed and released by Play’n GO. The Swedish studio is widely considered one of the best in the industry. It has released numerous hits so far, including the likes of Book of Dead, Reactoonz I and II, and a series of Arthurian slots.

What’s the lowest wager I can place on the USA Flip slot?

The lowest wager you can place on the USA Flip slot is $0.10. That gives you 10 spins per British Pound, which is more than enough for most players. You can also set the wager to what you like between this minimum size and $100, giving you plenty of options.

The USA Flip slot RTP is set to 96.20%. That’s a number most Play’n GO slots carry, although a bit higher than the average for medium variance titles. It suits it just fine, with frequent wins that range between small and big sizes.

How many paylines does the USA Flip slot have?

It has 20 paylines which you can adjust. While we don’t recommend going below 20, some players would like to try their luck on 5 or 10. Most modern slots don’t allow you to change the number of paylines, but USA Flip goes old-school with this feature.

Is USA Flip a Megaways slot?

No, it isn’t. Play’n GO isn’t particularly fond of the Megaways mechanic, instead developing its slots on its own math model. USA Flip is another example of it, with no unusual mechanics or features. It’s just a good ol’ slot that still pays handsomely with a maximum of 1,000x the bet.

How does the Walking Wild feature work in the USA Flip slot?

The Walking Wild feature is triggered by landing a full stack of Wilds on the middle reel. At that point, the full reel of Wilds will move a position to the right for each respin until it disappears from the grid on the fifth one.

How do I trigger the Near-Win respins in USA Flip?

Near-Win respins are triggered on a losing spin and a full stack of matching symbols on reels 1 and 2. The middle reel will then go for a respin, while the other four are locked into place. This can lead to some massive payouts, especially if you land Wilds.

Is there a Bonus Round in the USA Flip slot?

Yes, there is a Free Spins Round in the USA Flip slot game. You trigger it by landing three or more Scatters. It begins with 12 free spins and a flipped reel order. The other specials are available in the Bonus Round and land more frequently.

Which slots are similar to USA Flip?

When was the USA Flip slot released?