Play’n GO is one of the biggest developers in the industry and the studio behind dozens of hits. One of those is definitely Jolly Roger, a pirate adventure released in 2012 that ... Read Full Review 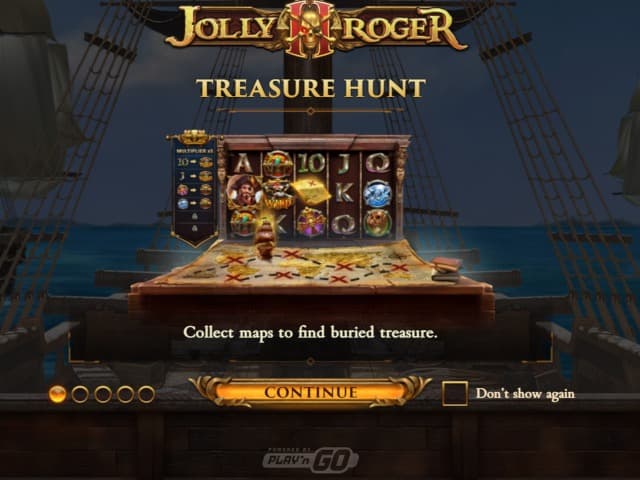 Play’n GO is one of the biggest developers in the industry and the studio behind dozens of hits. One of those is definitely Jolly Roger, a pirate adventure released in 2012 that just got a deserved sequel.

The Jolly Roger 2 online slot game by Play’n GO is a much more menacing pirate than its predecessor. It upends the 2012 slot game in all areas with more betways, bigger rewards, and more fun gameplay. You join captain Red Roger on a voyage through the seven seas looking for bounty and adventures.

The game has an RTP of 94.2% and a bunch of swashbuckling features that can increase it. In true pirate fashion, it also involves bottles of rum that should keep you warm and prepare you for the challenges ahead.

At first glance, Jolly Roger 2 is a pretty straightforward real money slot for players at New Jersey’s best online slot sites or the top Pennsylvania online slot sites. It has five reels in three rows populated by the pirate captain Red Roger and other pirate imagery that feels so familiar. Of course, Play’n GO has done a great job with the graphics, but we’re already used to that.

In the background, you can see the pirate ship itself proudly waving the skull’n’bones flag known as Jolly Roger. Since it’s a sequel, the Jolly Roger 2 slot machine retains some of the features of its predecessor. Of course, being released nearly a decade later, it offers improvements in almost all areas.

The buccaneering music in the background and on-point sound effects make Jolly Roger 2 a true swashbuckling high-seas adventure. Thanks to its distinct look and feel, it will make you feel like a true pirate.

In terms of paytable, there are nice symbols divided into high- and low-paying ones. The pirate-stylized card royals pay less than the skull symbols or the treasure chest. The Jolly Roger flag is the game’s wild while Red Roger is the scatter.

Just like all Play’n GO slots, the Jolly Roger 2 video slot is mobile-ready. You can play it for fun or cash on your Android or iOS mobile phone or tablet with ease.

Of course, the layout and design have been adapted to fit mobile screens so you shouldn’t have trouble enjoying the slot on your mobile devices.

Playing this video slot is very easy and it's sure to be popular with the best US real money slot sites. The bet sizes range from 0.20 to 100 coins per spin, so the slot is suitable for any bankroll. Wins pay traditionally from the leftmost reel to the right. The wild and treasure chest pay the most – five of these will land you a prize worth 10 times your stake.

The royals pay a lot less, somewhere in the 1,5-2x your bet for five of a kind. The base game is pretty straightforward. The wild does what it always does and the scatter triggers the bonus round. During the base game, a compass can award multipliers on any spin that go as high as 10x.

There are five multipliers in total ranging from 2x to 10x. This feature is random so you can only cross your fingers and hope for the largest multiplier.

If you’re lucky enough to land three Red Rogers (scatter) on the reels, you will activate the Bonus Quest feature.

Instead of following the free spins formula, Play’n GO decided to go another route with the bonus round. Or routes, to be more specific. Landing three scatters on the reels will activate the bonus quest feature where you get to match three pieces that will reward you with one of four bonus features. This promises to be up there with the best slots bonuses around.

First up is the Instant Prize. If rewarded, this bonus feature will give you a random credit prize that ranges between 2x and 20x your bet. The compass is also active during this feature, potentially boosting the reward you can get.

The Bottle of Rum feature is a pick’em feature. You’re presented with five bottles of rum that turn the reels wild. The compass is once again active during this feature and can award a multiplier on the awarded spin when you trigger the feature.

Jolly Roger 2’s third bonus feature are the battle free spins. These are unlimited and take you into a battle on the high seas with three lives. When you win a battle, you will get a free spin with the compass multiplier active and a pirate victory reward. If you lose, one of your lives is lost. Depending on who you fight against, you can earn one of four different rewards.

The final feature is called treasure hunt and is a free spins round. You get 10 free spins initially in a game where you collect maps to uncover a treasure. You know, just like pirates did in their time. Buried chests and treasure will add to your free spins tally and improve your chances to win.

Jolly Roger 2’s RTP stands at 96.20% which is great for a medium-variance slot. You can expect varied wins and the occasional big win should you get to the slot bonus round.

The maximum payout is 5,000 times your stake which is in line with other Play’n GO slots.

Jolly Roger 2 is a worthy successor to Play’n GO’s 2012 swashbuckling adventure. It offers many improvements over its predecessor, mainly the bonus features that can pay big.

Play the slot game for real money and you might win a chest of pirate treasure too. Give the slot a spin for real money, and check out the no deposit bonuses at Slotsource.com and be patient – there could be a massive reward waiting just around the corner.