A ClusterPays machine set in ancient Egypt, Golden Osiris by Play’n GO online slot games is a breath-taking time travel to the ancient past. It is based on the ancient Egyptian g... Read Full Review 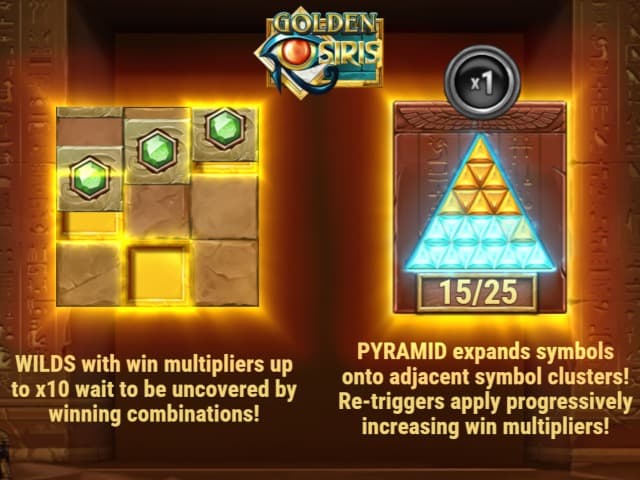 A ClusterPays machine set in ancient Egypt, Golden Osiris by Play’n GO online slot games is a breath-taking time travel to the ancient past. It is based on the ancient Egyptian god of the afterlife, but there’s nothing scary about it. Osiris is quite generous, allowing players to win ancient treasures to the tune of 12,000 times your stake.

A highly volatile slot machine with a 7x7 grid, Golden Osiris is an extraordinary game with massive payouts if you get lucky. It is brimming with special features starting with the cascading wins that can easily boost your payouts. Typical for Play’n GO slots, it also comes with a full set of special symbols that can bring the riches.

All of that is packed in quite an attractive box with great audiovisual elements. Play the Golden Osiris online slot for real money in your top slots casino and take a lucrative trip to Egypt’s ancient past.

At first glance, Golden Osiris might be a bit tricky for newcomers. It’s not a slot with a regular reel set. Instead, it plays on a special 7x7 grid and uses the ClusterPays engine to deliver wins.

This engine uses cascading wins which aren’t tied to 3 adjacent symbols. Instead, it pays for clusters of 5 matching symbols or more. The symbols are divided into two groups – the gems are low-win symbols; deities and scarabs are high-win symbols. The latter is the highest-paying in the Golden Osiris slot game. Land a cluster of 15+ scarabs and you’ll easily win 100x your stake.

Like all Play’n GO slots, Golden Osiris looks and feels great. The action is followed by nice ambient tunes that pick up as the action unfolds – and it goes even better with the best slot bonuses at SlotSource.

All Play’n GO slot games are fully mobile-ready and Golden Osiris is no exception. You can play it for free or real money on your Android and iOS smartphones and tablets no matter the screen size.

How to Play the Golden Osiris Video Slot

To start the ClusterPays action, you’ll need to set your real money slots bets first. Pick any coin denomination between 0.10 and 100 and hit the Spin button. The symbols will disappear through the bottom and new ones will fall from the top. If you hit a winning spin, the cascading reels feature comes into play, replacing the winning symbols with new ones.

This can create a cascade of wins that go on until a losing spin. At the same time, the cascading reels also bring three other special features into play.

There’s a quartet of hidden wilds behind standard symbols on the grid. These become active when a particular symbol they hide behind is part of a winning combination. They substitute all other symbols and may come with an x10 multiplier attached to them. Each new cascade adds up to 6 wilds on the grid.

When you win, certain symbols fill the Pyramid Charger to the left. If you hit a cluster with 25 winning symbols, it will open and reveal a symbol. All instances of this symbol will convert the adjacent symbols on the grid to themselves and pay great returns. The pyramid can be recharged – the multiplier is set at 3x for the first recharge and can go up to 30x on subsequent recharges.

The Golden Osiris online slot game also comes with a free spins round. It is triggered with 2 scatters on the grid, which destroy symbols next to them. If a third one is uncovered during the cascade, you will enter the free games round.

You get only 5 free spins to begin with, but the pyramid to the left is fully charged on each spin. The hidden wilds are active during the bonus round too, which brings the multiplier to x30 and promises massive wins.

The Golden Osiris slot machine has a rather solid RTP of 96.27%. It’s a high-variance slot so mind your bets. If you lucky and unlock special positions on the grid and the multipliers, it pays up to 12,000x your stake, or a maximum payout of 1,200,000 credits at the top stake. Check out our no deposit bonuses to get started.

Play’n GO has definitely scratched the players’ ancient Egypt itch with the Golden Osiris slot game. It’s an excellent ClusterPays slot with fun gameplay, including three exciting features in the base game. All of them are active in the free spins round as well, promising great wins. Play Golden Osiris for real money at the top New Jersey online slot sites or Pennsylvania’s premier online slot sites and you might uncover an ancient treasure.