Somewhere over the rainbow, the time has come to start gathering the glistening goods hidden within the GEMiX slot, a sparkling 7x7, a cluster-paying game created by Play’n GO. Collect your share ... Read Review 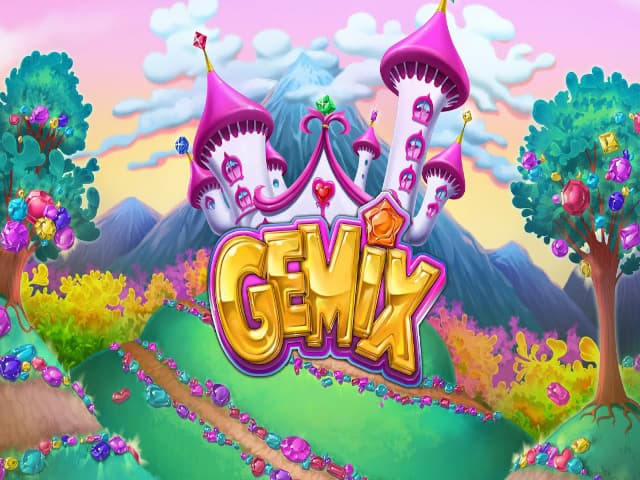 Somewhere over the rainbow, the time has come to start gathering the glistening goods hidden within the GEMiX slot, a sparkling 7x7, a cluster-paying game created by Play’n GO. Collect your share of the precious stones in figures of 5 or more to form a paying cluster. From the very beginning of the game, this enchanting wonderland will entice players into a whole new world of wins, which will feel like we’re living out our very own fairytale.

The eye-catching visuals and circus-style soundtrack will take us through our paces alongside three quirky and animated characters: a miner, wizard, and fairy princess. You might be wondering which of the three will be leading you to luck? We say follow the rainbow to reap the rewards.

Hitting five or more of the same shining symbols from above can form a winning cluster, whether the symbols land vertically or horizontally.

The features of the game vary depending upon which “world” you are playing in. The slot contains a level-up structure, where you’ll enter into a new world based upon earning specific achievements.

The GEMiX slot can be enjoyed by players anywhere, playing with real money from a wide range of the best New Jersey online casinos and top Pennsylvania online slot sites.

The GEMiX online video slot boasts the brightest and most enticing audiovisual qualities while offering an instant sense of adventure since you can be teleported from world to world within the game – how’s that for a slice of variety?

This magical slot experience is all set on a 7x7 grid with nine paylines and cascading reels; the GEMiX slot features glistening gems gliding up and down the grid, which will replace old symbols. The built-in level-up system keeps players challenged throughout their slot experience, offering three unique levels packed with severe money-making potential.

To fire forth to the first level of the game (Crystal Charge), you need to secure at least 20 of those sparkling symbols to unlock the wonders of the first “world.” The GEMiX slot will award symbol combinations that appear in clusters of 5 and then disappear to replace symbols. All it takes is for the right gems to appear in the right place, at the right time to be out with the old and in with the new winning symbol combinations.

Players can monitor their progress from level to level from below the grid, where several blue squares change color every time a new level has been unlocked. For every “world” that you play your way into, there will be a whole host of wondrous wins to appear.

GEMiX features a range of high-paying and low-paying symbols. The true power is revealed with the star symbols that pay 1000x the stake when a total of 15 lands on a payline, while red hot heart symbols offer 500x the wager for 15 on a payline.

Playing the GEMiX Slot on Mobile

The gathering of precious gems can take place across many platforms, including desktops, laptops, smartphones, and tablets in the GEMiX real money video slot, supported by all major operators such as iOS, Android, and Windows.

How to Play the GEMiX Slot

You decide how this fairytale ends since you can place your minimum wagers as low as 0.10 to a maximum wager of 100.00.

While immersed within this fortune-filled fairytale of a slot, players need to form clusters of 5 of the same symbols. The more, the merrier, the more symbols to appear in the set will offer an even bigger payout, leading you closer to magical max Multiplier wins of 4,513.5x your wager.

Every time a new cluster is created, the symbols within this cluster will be replaced by several shiny, new symbols, offering countless opportunities to win over and over again.

The GEMiX Slot Base Game Features

There is a crystal charge meter within the game that increases each time a win occurs. When the charge is complete, the reels will stop cascading, resulting in the onset of the Crystal Charge effect, which will activate one of the following bonus features.

Nova Blast. Any given symbol can be selected on the grid and will burst at random, removing all of the adjacent symbols when the effect has been triggered. The blast is then reversed, and a cluster of the same symbols is released.

Crystal Warp. A symbol on the grid will be selected randomly, followed by selected symbols added to the cluster.

Light Beam. Beams of light will be moving vertically and horizontally from a chosen symbol on the grid, and then all symbols are changed into new ones.

Chain Lightning. Opposites attract, so two symbols from the corner opposite one another strike one another, forming an arc of light and a transformation of symbols.

20 will be the magic number here, as creating a cluster filled with 20 symbols will trigger the Crystal Warp feature and allow you to climb the ladder to the next level. Aim for the fabulous ’40s, as this amount of symbols will release the precious prizes within an instant.

In this story, there’s a world dedicated to each character: one for the princess, one for the wizard, and one for the miner, where you’ll want to watch in wonder for the Wilds, as there is an exclusive Wild symbol for each world: the lantern Wild for the miner, the spellbook Wild for the wizard and the lollipop symbol for the princess, all of which will veer you towards the valuables, to peel the layers that lead to the next level of the slot.

Once these magical effects have worn off, the crystal meter will reset and recharge, meaning that the game can continue to generate even more wins.

The GEMiX slot is quite literally a medium-volatility masterpiece with a default RTP of 96.83% and maximum multiplier wins of 4,513.5x the wager.

It’s fair to say that the GEMiX video slot is the one that takes us back in time to the Fairytale days. The cluster payout system teamed with the advanced features makes for a genuinely dreamy slot experience that becomes a reality filled with rewards.

Now, if you enjoyed getting your game on with the many mystical forces from favourite folk tales, then you’ll be glad to know that there is a sequel to this slot called Gemix 2, and you’re going to love it!

When was the GEMiX video slot released?

The GEMiX video slot made its way into the online gaming industry in 2014.

Is there a sequel for the GEMiX video slot?

Yes, a new and improved 2nd version Gemix 2 video slot is available to play at all of the best online casinos.

How many paylines does the GEMiX have?

There are nine paylines in the GEMiX for players to form clusters and win.

Can I play the GEMiX on my smartphone?

Yes, the GEMiX game is available to play on smartphone devices, tablets, laptops, and desktops.

Is GEMiX a high-volatility slot?

No, the GEMiX slot is a medium-volatility adventure.

What is the minimum wager required to play the GEMiX online video slot?

Players can place wagers from as low as 0.10 in their respective currency.

How can I win in the GEMiX video slot?

It’s all about forming clusters filled with identical symbols. The more symbols you collect, the higher the payouts. Collecting enough symbols in a bunch is vital since it can trigger one of the unique features that activate the instant wins.

Is GEMiX a good slot game to play?

It sure is! Not only does it come with a vibrant theme, but it has the power to send players on a magical journey using a level-up system, which offers a whole new host of rewards as players make their way through the various levels.

What is the maximum wager in the GEMiX slot?

Players can increase their maximum wager to 100.00 in their respective currency.