Bull in a Rodeo Slot

Bull in a Rodeo is a Play’n GO release distributed to online casinos on August 25th, 2022. As its name suggests, this game features a bull-riding theme. However, the visuals here... Read Full Review

Play Bull in a Rodeo for Free Now!

Play'n GO - Bull in a Rodeo 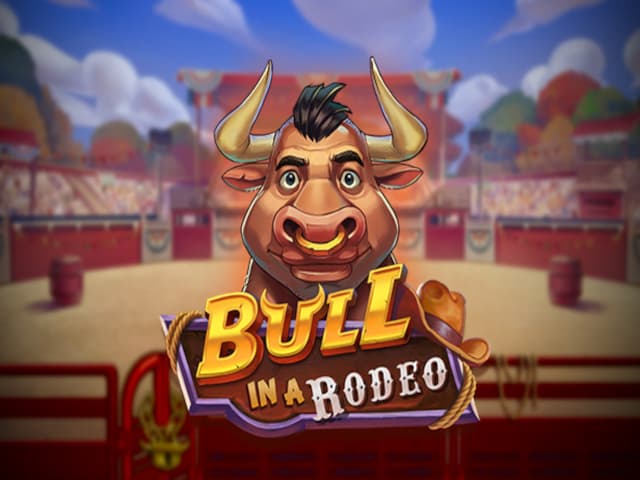 Bull in a Rodeo Slot Review

Bull in a Rodeo is a Play’n GO release distributed to online casinos on August 25th, 2022. As its name suggests, this game features a bull-riding theme. However, the visuals here are not actual images or photo-realistic illustrations. Instead, they are cartoony graphics that feature a bold, short-tempered bull that online gamblers first saw in Play’n GO’s Bull in a China Shop slot, which hit casino lobbies in early 2021.

Hence, the loveable muscular animal is back, this time, taking you on a real money rodeo reel-spinning adventure occurring in a crowded stadium in what we assume is a southern part of the US. The reels here spin inside a bucking chute on this medium to high variance 20-payline spinner with an RTP of 96.28% and a max win potential 2,000x your stake.

Various matador and bull-inspired games are available on gaming platforms, such as Wild Toro II from ELK Studios and Bulls Run Wild from Red Tiger. Nevertheless, this one ranks high and will for sure become a favourite for online slot players who should be able to use their bonus funds on its reels. When doing so, they seek entry into the Freedom Spins to get a whiff of this slot’s mega prize.

The Bull in a Rodeo slot does not have a fancy grid layout, as it sticks to the tried-and-tested 5x3 setup. Thus, no one should have an issue picking up this reel-spinner and grasping how to play its base game almost instantly. Its bonus features are a bit more intricate, but nothing too complicated even for newbies to quickly understand.

The mentioned bucking chute holds the symbol positions, and the tokens that fill them divide into two groups. The first category is low-pay card suits, giving away wins of 1x to 1.4x for five-of-a-kind combos. The second, the premiums, are a hat, boots, a whiskey bottle, a mirror, and a bull-rider. These will produce wins from 4x to 18x for five matching tokens from this batch.

There are multiple Wilds in this slot, with the happy bull paying wins of 40x when he appears five times on the same spin and the fuming one generating rewards of 80x on the occasions he graces the grid five times when the reels stop spinning. So some decently-sized awards await in the Bull in a Rodeo slot's base game.

There should not be an issue with anyone playing this Play'n GO slot product on any Windows, iOS, or Android device. It got developed using HTML5 technology, so browser play for tablet and smartphone fans should be seamless, with no missing features.

Bull in a Rodeo Slot Gameplay

To start wagering real money on Bull in a Rodeo, select a wager size from the bottom middle panel and press the green spin button on the right section of this configuration. The lowest possible wager is $0.05 per spin, while the highest is $100. To get this game to produce a payout, you must land at least three matching symbols on adjacent reels of one of the 20 winning paylines.

There is not much to say about the base reel-spinning entertainment in Bull in a Rodeo. Essentially, the heart and soul of this slot are its Wilds, which we will explain in the upcoming subheading.

Of course, the Bull Token is at the core of this slot's lucrative real money prospectives, as he is the secret to activating the Wild Feature. So, when a Wild Bull lands, he triggers one of three modifiers. These are the Happy Bull, spreading random single Wilds. The Proud Bull is responsible for Stacked Wilds, and the Angry Bull distributes 2x Multiplier Wilds.

If the primary bull and the Gate Scatter Symbol are on the game grid together when the reels stop spinning, that will engage the Freedom Spins Round and give away ten on-the-house reel rotations. In this mode, this slot’s main character can keep activating the discussed Wild Features, plus add three more Rodeo Bull Wilds at random spots. You can retrigger the Freedom Spins round on its very last spin.

Bull in a Rodeo Slot Verdict

When passing judgment on Bull in a Rodeo, we initially must assess how it stacks up with its predecessor, Bull in a China Shop. In our opinion, this slot is the weaker of the pair. It has a lower win potential. And naturally, it feels a bit staler.

That said, for a high variance title, the listed specifications are not horrible at all. The mix of a simple base game with a few reasonably intriguing bonus features makes this slot a perfect fit for most casual players. If you fit this bill, check it out at one of our highlighted top New Jersey online casinos and the best Pennsylvania online slot sites today.

Bull in a Rodeo Slot FAQ

Who is the creator of the Bull in a Rodeo online slot?

It is Play’n GO, one of the most famed Swedish online slot developers, the winner of the Slot Provider of the year award in 2017 at the prestigious industry IGA show. Play'n GO is the company behind the Rich Wilde franchise.

Can I play the Bull in a Rodeo slot game on mobile??

Yes, you can! All of Play’n GO’s interactive online gaming products get created to get enjoyed on any device that runs HTML5. Therefore, we do not foresee any problems playing this online slot on any reasonably modern smartphone or tablet.

Does the Bull in a Rodeo slot have Free Spins?

Yes, it does. The Free Spins Round here bears the name the Freedom Spins, and to trigger it, you must land the Gate Scatter and the Bull Wild on the same spin. When you do that, you will get ten free spins in this Bonus Mode.

Does the Bull in a Rodeo slot have a jackpot?

No, it does not. The Bull in a Rodeo slot does not have a jackpot reward. It offers no fixed or progressive mega prizes. It is a medium variance game, so it pays out decently-sized wins with some regularity, and its top one is a win of $200,000.

Do I need to download the Bull in a Rodeo slot?

No, you do not. As touched upon multiple times above, the Bull in a Rodeo slot runs on HTML5, so it should be available for instant-play at any one of the premium platforms we list that carry Play’n GO reel-spinners.

How many paylines does the Bull in a Rodeo slot have?

It has 20 paylines. To earn a prize on this slot, you must create a symbol combo of at least three identical symbols on adjacent reels on one of its 20 paylines. All wins pay left to right, with the highest combo getting priority always.

What slots are similar to the Bull in a Rodeo game?

Surprisingly, there is no shortage of bull-themed wagering action in the interactive gaming sphere. Over forty bull-fighting online slots alone exist, and the best ones are Corrida Romance from Wazdan, ELK Studio’s Wild Toro series, and Ruby Play’s Bull Fever.

What is the minimum wager on the Bull in a Rodeo slot??

What are the symbols in the Bull in a Rodeo slot?

The low-pay ones are different-color card suits carved out of wood. The high-pay ones are a green cowboy hat, purple boots, a whiskey bottle, a vanity mirror, and a bull-rider. The Wilds here can also generate rewards for combos of three or more.

When did the Bull in a Rodeo slot get released?