You might find yourself uttering “What’s up Doc?” in your best American accent, as you trudge through the streets of New York City, making your way into the dark depths of the ... Read Review

Other Game Providers - The Bowery Boys 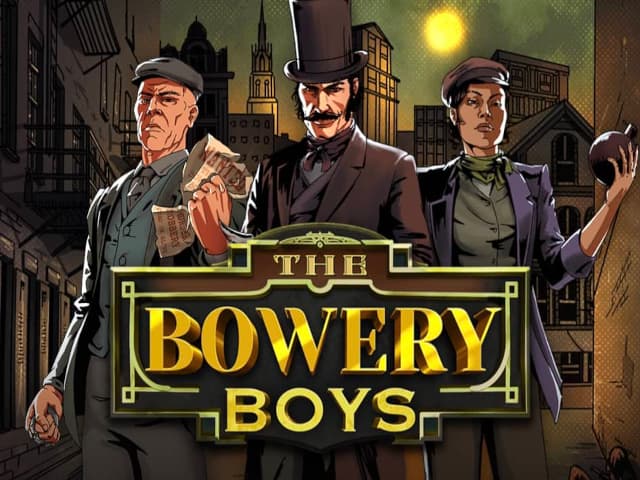 You might find yourself uttering “What’s up Doc?” in your best American accent, as you trudge through the streets of New York City, making your way into the dark depths of the Bowery neighbourhood. Hacksaw Gaming’s The Bowery Boys slot means embracing 19th-century gang culture since the Bowery’s were one of the first gangs to flock to New York back in the day. It’s worth noting that this slot is not for the faint-hearted, as these folk were anti, just about everything, and weren’t exactly a pleasant bunch to be associated with, which is why it’s probably a good job that the maximum win potential within the game is relatively high!

The Bowery Boys slot oozes a gritty comic book feel to it, with midnight menacing taking place in the background. Players will see some popular characters emerging upon the grid beneath the moonlight, as a great deal of high-risk activity takes place. If the moody theme and graphics don’t give it a way, then the sounds and sudden bursts of violence will do just that! Find the slot game at our recommended New Jersey online slot sites and top Pennsylvania online casinos and immerse yourself in a 19th-century gang culture!

Get going with the gang, where the action-packed adventure begins across a 6x5 game grid. When it comes to accumulating wins as a result of the same symbol combinations, be sure not to expect the traditional cluster wins model. Make way for the Hacksaw’s All-Scatter wins approach, which basically means that all symbols collected would be paid as if they are Scatter symbols. To land a win, players will need to land a total of 8 of the same symbols.
In terms of the game’s symbols, expect to see the usual suspects, featuring both high and low-paying symbols. The playing cards will appear as the lowest-paying symbols within the game, whereas the themed symbols remain at the higher end of the spectrum. When observing symbols, the higher-paying symbols will appear as gang member characters, guns, women, couples, and men fighting. Keep a close eye for the Golden Key Wild Symbol, which has the power to replace the majority of paying symbols within the game.

How to Play The Bowery Boys Slot

To get started with The Bowery Boys real money slot, hover towards the bottom of the screen where you will find all the controls you need, including the wager adjustment menu and the Spin and Autospin buttons.

To increase or decrease the minimum or maximum wager, use the up and down arrows located beside the wager value shown at the bottom of the screen. The minimum wager starts from as low as 0.20 and can be increased to a maximum wager of 100.00 in your chosen currency. Once all adjustments have been made, hit the spin button which is located at the bottom right-hand corner of the screen.

Brace yourselves for your best share of the action across any of your chosen devices. Tune in from mobile smartphones, tablets, laptops, and desktops, all of which are powered by iOS, Android, and Windows, meaning it couldn’t get more user-friendly or convenient to jump right into the deep for the darkest but most rewarding experience yet.

Players will be delighted to know that The Bowery Boys slot is bursting with plenty of rewarding bonus features. Expect to see a total of three bonus games, Cascading Reels, Blasting Bomb Multipliers, Strongbox Symbols, and Buy Bonus to top it all off nicely.

The three bonus games require a collection of up to three of the Bonus Symbols. As a result, one of the following will be rewarded: The Strongbox Storage which awards 10 free spins along with keys and strongboxes which can award additional spins. Daisy’s Dynamite awards 10 free spins all of which will be boosted by multipliers. The Bowery Savings Bank also awards a total of 10 free spins which also contain a whole host of winning hidden features.

The cascades work in a similar fashion to most other slots, in the sense that, when all winning combinations have been formed, the winning symbols will be removed from the grid and will be replaced by brand-new symbols. This feature is continuous and can continue until no new winning combinations are formed.

The Strongbox Symbols appear in three different sizes, from small to medium to large. For best results, capturing a strongbox symbol and a key symbol landing at the same time will result in a mystery set of awards. All different sizes of Strongbox Symbols can award different amounts, which can reach as high as 250x, whatever the size of the win, this will be added to the total win accumulated within the overall game.

The Blasting Bombs contain multipliers of between x2, which can increase up to x100 and will again be added to the total accumulated win.

Players may be granted the opportunity to a Buy Bonus, where they can purchase one of the three bonus games. This can be purchased for a total starting from 80x to 300x the stake.

The Bowery Boys slot’s maximum multiplier win can reach as high as 10,000x the stake and has a default RTP of 96.41% given the high-volatility nature of the game.

If you fancy a little more edge in your life, then it’s highly recommended that you do take the risk and enter into the gangsters' paradise found within The Bowery Boys slot. The bonus features are overloaded with plenty of opportunities to lead players to their maximum win of 10,000x the stake, and also ensure maximum entertainment throughout this deep, dark quest into the 19th-century underworld.

If this slot was right up your street, then we’d say that you might just love Pragmatic Play’s The Great Stick-Up slot, which will have you rolling around with a whole different breed of gangster. Go get 'em’!

The Bowery Boys online slot was created and distributed by a premium game software provider called Hacksaw Gaming, who are major players within the iGaming industry, behind the creations of the Hand of Anubis slot and the Outlaws Inc slot.

When was The Bowery Boys slot released?

The Bowery Boys slot was launched into the online gaming market on the 23rd of February, 2022, making it a glorious creation that is definitely worth a shot at the best online slot sites!

What is the maximum RTP for The Bowery Boys slot?

The high-volatility nature of The Bowery Boys slot means it’s completely plausible to have a default RTP set to 96.41%.

Is The Bowery Boys slot considered high or low volatility?

The Bowery Boys slot is a high volatility video slot, so be sure to storm into the game with a high-risk and high-rewards mindset.

Can I play The Bowery Boys slot for free?

Yes, you sure can play The Bowery Boys online slot for free with the demo version of the slot game, or you can seek out your favorite online casino and start playing with real money whenever you feel like it!

Which is the best casino to use when playing The Bowery Boys slot?

There are dozens of top online casinos to choose from, we’d suggest keeping your eyes out for the casinos with the best rewards and bonus offers, which will in turn boost your potential to earn even greater rewards when getting started with The Bowery Boys slot.

What is the maximum wager I can place with The Bowery Boys slot?

Players can wager their maximum wager of 100.00 in their chosen currency when playing The Bowery Boys slot.

What symbols will I find when playing The Bowery Boys?

Do expect to find all the major and usual symbols when playing The Bowery Boys video slot. There are a combination of both high and low-paying symbols, as well as Scatters, Wilds, and other bonus symbols to watch out for.

What bonus features will I find when playing The Bowery Boys slot?

There are some seriously superb bonus features to benefit from when playing The Bowery Boys video slot, which includes 3 Bonus Games, Cascading Reels, Strongboxes, Blasting Bomb Multipliers, and many more.

Is there a Free Spins Round in The Bowery Boys slot?

There is no Free Spins Feature in The Bowery Boys video slot, however, spins can be granted as a result of landing one of any of the game's listed bonus features.