Fantasma Games is a studio on the rise that impressed critics and players alike with its Flower Fortunes slot. It was a huge Megaways hit with an expanding set of winning ways ... Read Review 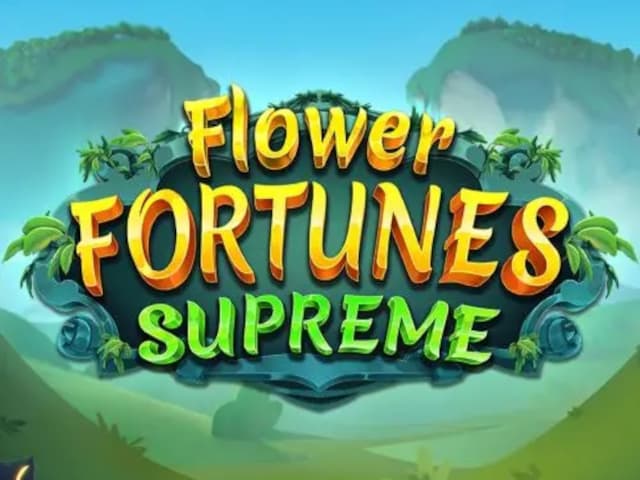 Fantasma Games is a studio on the rise that impressed critics and players alike with its Flower Fortunes slot. It was a huge Megaways hit with an expanding set of winning ways that went all the way up to 531,441. That’s a pretty uncharacteristic number that greatly improved the slot’s winning potential with a maximum payout of nearly 19,000x the wager.

The success of that slot led the studio to think about a sequel. It got released in mid-2022 and it’s simply called Flower Fortunes Supreme. Unlike the original, this one doesn’t start with 64 ways to win. It comes right off the bat with 531,441 bothway paylines but without the Megaways engine this time around. Flower Fortunes Supreme is a medium variance slot game and has an RTP of 95.88% to start with.

We’ve all heard about fruits being a classic slot symbol, but flowers are seemingly just as great. At least they are in this slot, which tries with dynamic gameplay that will impress all kinds of players spinning the reels at the best New Jersey online slot sites and top Pennsylvania online casinos.

The Flower Fortunes Supreme slot is a visually-impressive title with dynamic and fun gameplay. From the moment you’re greeted by the splash screen logo, it’s pretty clear that the studio aimed for the video game angle here. This is a very nice-looking slot set in a land far away at green plains with a pair of hill peaks peeking from the background. It doesn’t have a traditional layout – instead, you get 6 reels with a varying number of rows depending on the size of the symbols.

The set of symbols is divided between high and low pays. The high-paying gems are shiny, while the low-pays are opaque. Players will get a payout of 10x for six of the highest-paying premiums, which isn’t that big of a payout, to be honest. However, the slot has a range of modifiers that can build upon it.

Like most top slot games in USA, the  Flower Fortunes Supreme slot was developed on the HTML5 platform and can be played on literally any Android or iOS device at any Android casino and iPhone slot site. You don’t even need to download it as it works perfectly via a mobile browser.

Place a wager from $0.20 to $200 and hit the Spin button to start the wild ride. Hold on to your hats because this will be a very fun ride.

To the left of the grid, you’ll see a meter. It has 4 level steps and 5 levels in total. Each level expands the reels by 1 row with different features unlocked per level and surprisingly alters the RTP. Players can climb the Flower Meter by collecting orbs. They aren’t a symbol themselves – they just appear overlaid on others. Watch out for the leaves, though, as they send you a level down.

Here’s what each level offers:

When you reach the first level, the respins start by landing a respin symbol on reels 2 to 5. A respin orb will fly around and remove low-win symbols, triggering cascades that can go on and on.

The other modifiers are self-explanatory. Expanding Wilds will cover full reels and they may also land with multipliers up to x9.

When you get to the top of the Flower Meter all wins will start paying both ways. This is where players can score the top prizes thanks to the incredible number of winning ways.

Landing three or more Bonus Symbols anywhere on the screen when you’re at level 3 on the Flower Meter will start the Bonus Round. It’s a pick’em game with 5 flowers that appear at the end of the number sequence. They simply award random prizes worth up to 4,300x the stake. The good news is that you can pick the same flower several times.

The Flower Fortunes Supreme slot RTP is 95.88% when you start but can go as high as 96.41% depending on your progress on the Flower Meter. The maximum payout is 5,000x the wager.

Flower Fortunes Supreme is a supreme sequel to the fun original. It boosts nearly every aspect pairing the fun gameplay with a medium variance which means frequent wins. The Flower Meter is its best feature, unleashing various modifiers that can take your spins to the next level.

It’s a fun flower power of a slot that can pay nicely, albeit less than the original. Start your flower playthrough now with the best slot bonus and you’ll be impressed by how enchanting of a ride it is.

The Flower Fortunes Supreme slot was released by Fantasma Games. It’s a studio that has recently been getting plenty of attention thanks to the release of several hits such as the original Flower Fortunes slot as well as Serpent Shrine and Heroes Hunt Megaways.

The RTP in this slot varies. At level 0 on the Flower Meter, it’s 95.88%. However, it will go higher and improve the slot’s winning potential as you progress on the meter. This will also result in modifiers that will give your wins a nice boost.

No, it isn’t. This is a medium variance slot game that pays varied wins. By varied, we mean frequent small ones and the occasional bigger score. Keep your wins varied too and you will get the most out of the math model.

Can I play the Flower Fortunes Supreme slot for free?

Yes, you can. The slot is available in demo and real money mode. Every Fantasma Games casino will allow you to spin the reels for free, sometimes without an account. It’s a great idea to try the game for fun first to see how the features work.

Is the Flower Fortunes Supreme slot available on mobile devices?

Of course, it is. The slot was developed on the HTML5 platform which enables players to spin it on the go on any Android and iOS device. You don’t need the latest Galaxy phone or iPhone to play it since it has no specific hardware requirements.

Do I need an app to play the Flower Fortunes Supreme slot on the go?

You don’t need an app to play the Flower Fortunes Supreme slot on the go. You can play it from your mobile browser. Head to your favorite casino with Fantasma games, find it in the lobby and spin away for free or real money.

How does the Flower Meter in Flower Fortunes Supreme work?

The Flower Meter can be seen to the left of the grid. It has a total of 5 levels and 4 points to reach across. You climb the ladder by collecting orbs that randomly appear on any symbol. Reaching any level will give you a modifier, mostly respins and Expanding Wilds as well as higher RTP. On the last level, the both-way-wins mechanic kicks in.

How many paylines does the Flower Fortunes Supreme slot have?

The Flower Fortunes Supreme slot has 531,441 ways to win, not classic paylines. While it sounds like a Megaways slot and the original slot ran on the mechanic, this one has a different math model. The paylines pay traditionally from left to right but can pay both ways on the final Flower Meter level.

Which slots are similar to Flower Fortunes Supreme?

The original Flower Fortunes slot is pretty similar to this one. It has similar gameplay but runs on the Megaways engine and has a higher winning potential. If you’re looking for similar slots in terms of gameplay, you should take a look at Butterfly Staxx 2 by NetEnt.

When was the Flower Fortunes Supreme slot released?

The Flower Fortunes Supreme slot was released on June 30, 2022.