There are few games that have had quite an impact on geek culture quite like Dungeons and Dragons. The hugely popular role-playing game boomed in popularity straight after its release in the ... Read Review

Other Game Providers - Dungeons and Diamonds 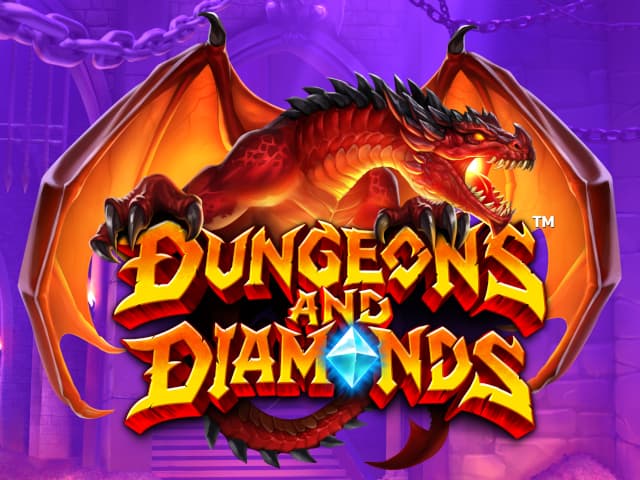 There are few games that have had quite an impact on geek culture quite like Dungeons and Dragons. The hugely popular role-playing game boomed in popularity straight after its release in the mid-1970s and has never let up since. Its influence has been massive, and if you don’t believe us, just head down to your local Comic-Con and you will see. While it has had a slight name change, it is quite clear where the Dungeons and Diamonds online slot game has pulled its inspiration from. This D&D-style title comes from the team at PearFiction Studios and has been released by Microgaming as part of its partner’s program and is available at the best Pennsylvania online slot sites and top-ranked New Jersey online casinos. This program is designed to shine a light on promising developers, so has PearFiction Studios managed to showcase their talents here? Let’s take a more detailed look into this Dungeons and Diamonds slot review and find out.

The overall design of Dungeons and Diamonds is exactly as you would expect. The slot takes us deep into the heart of a cave where a dragon sleeps on top of a bed of golden coins and other treasures. Anyone who has seen the Hobbit movies will instantly recognize this set-up, with the slot clearly taking some inspiration from the Peter Jackson trilogy.

The symbols on the reels include an elven warrior, a dwarf, a sorceress, and a wizard. What the slot lacks in originality, it does make up for with some great character design and some solid graphics. The whole thing looks incredibly slick, and it maintains this level of quality when it jumps over to mobile devices as well. The soundtrack is also well put-together and helps make you feel as though you are on some sort of noble quest.

How to Play Dungeons and Diamonds Online Slot

The game of Dungeons and Dragons is notoriously difficult for new players to sink their teeth into. Thankfully, that is far from the case with the Dungeons and Diamonds slot game. The game takes place on a slightly enlarged 5x5 grid with 40 active paylines on every spin.

The stake is adjusted using the +/- buttons at the bottom of the page. Players can wager between $0.20 and $50 on any spin when playing for real money, giving this game a fairly average wagering range that should please lower-budget players. The Autoplay button allows for up to 100 spins with the option to stop whenever a big win is landed. There is also a Turbo option for those players who live in territories that allow this to be used.

With most new real money slot sites now offering mobile play, you should have no issues finding somewhere to take the Dungeons and Diamonds mobile slot for a spin. PearFiction Studios has developed the game using HTML5 technology, ensuring that it will run across multiple platforms and devices. The game maintains all of its gameplay mechanics and features when it makes the switch to the smaller screen size.

PearFiction Studios has stuck with fairly tried and tested methods when it comes to bonus features in the slot. The game has three main bonus options – a Free Spins Round, a Collect Feature, and a Jackpot Mini-game.

Firstly, the Free Spins Round. This is fairly by the numbers, with the round being launched when players land three or more Scatter symbols. Eight free spins are launched and during the round, additional high-paying symbols and more Collect and Jackpot Symbols are added to the reels, increasing the chances of a big win.

The Collect feature is very similar to the one made popular by slots like Fishin’ Frenzy Megaways. Gem Symbols with prizes attached can land on reels 1-4. If they land alongside a Collect icon on reels 5, then the prize will be collected. There are a few nice touches thrown in though, with the game having a Double Collect, which will increase the winnings, and a Respin Collect, which sees the reels given a respin to attempt to increase the prize.

Finally, there is the Jackpot feature, which is an extension of the Collect mechanic. This is triggered when players land the Collect Symbol with a Jackpot Symbol. This triggers a mini game where players must choose three prizes that will match their respective jackpots.

PearFiction Studios has sprinkled their magic into the underlying numbers here with the slot offering some solid prizes. The maximum win here is 5,627x the stake and it is rewarded by landing the biggest jackpot in the game. The RTP is 96%, putting it at the industry average, and the slot is highly volatile. It is worth noting that there are different versions of the slot available with lower RTPs, so be sure to check the RTP before taking the game for a spin.

Dungeons and Diamonds is a fun slot from the team at PearFiction Studios, though, it is not one that is going to be reinventing the wheel any time soon. The design is really nice and is a big selling point for the title, but many of the features can be found in other top online slot games. Not that this is the worst thing, with the slot still delivering engaging gameplay and offering some good wins. If you are after a slot with a good fantasy theme, then this could be the one for you. If not, you can find many of the features of the slot in other titles.

Who made the Dungeons and Diamonds online slot game?

The Dungeons and Diamonds online slot was developed by PearFiction Studios and released by Microgaming. The game was released as part of the Microgaming partner program, ensuring that the slot game is accessible at a range of top online casinos.

Is there a Dungeons and Diamonds jackpot to win?

Yes! There are four jackpots that can be won in the Dungeons and Diamonds online slot game. Winning these is done by triggering the Jackpot Bonus Round. To do this, land a Jackpot Symbol with the Collect Symbol on reel 5.

What does the Collect Symbol do in Dungeons and Diamonds?

The Collect Symbol in the Dungeons and Diamonds slot is needed to help reward players with big payouts. Whenever it lands with a Prize Symbol on reels 1-4, it will collect them. A Collect Symbol on its own has no use in the game.

How much can I wager in Dungeons and Diamonds?

Can I play the Dungeons and Diamonds slot game for real money?

Absolutely! The Dungeons and Dragons online slot game can be played for real money at a number of top online casinos. You can find a casino that suits your needs by checking out our detailed casino reviews elsewhere on the site.

What is the highest paying symbol in Dungeons and Diamonds?

The Wizard Symbol is the highest-paying symbol in the Dungeons and Diamonds base game. This is followed closely by the Sorceress Symbol.

What other slots are similar to the Dungeons and Diamonds slot?

The Dungeons and Diamonds slot has similar features to a lot of slot games. The Fishin’ Frenzy slot game uses a similar collect style feature, while the jackpot mini game can be found in a range of top online slots.

How do I trigger free spins in the Dungeons and Diamonds slot?

The Dungeons and Diamonds Free Spins round is triggered when players land three or more of the game’s Scatter Symbol. This will reward eight free spins. During the spins, extra Jackpot and Collect Symbols will be added to the reels.

Can I play Dungeons and Diamonds on my mobile?

Of course! Dungeons and Diamonds has been fully optimized by PearFiction Studios to ensure that it will run across various mobile devices. This includes mobile phones and tablets.

When was the Dungeons and Diamonds slot game released?

The Dungeons and Diamonds online slot game was released on April 26th, 2022.