The African plains have long been a source of inspiration for online slot developers, and one of the latest titles to hit the virtual shelves is the Diamond King Gold slot game ... Read Review 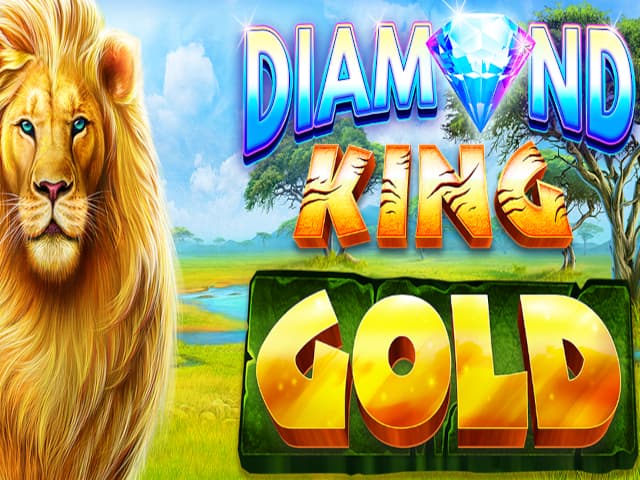 The African plains have long been a source of inspiration for online slot developers, and one of the latest titles to hit the virtual shelves is the Diamond King Gold slot game from Games Global. Games Global has burst onto the iGaming scene with its acquisition of industry big-hitter Microgaming, and eyes will be on the company’s first few months-worth of releases. Let’s have a look at what is in store for us in this Diamond King Gold slot review.

As far as visuals go, Diamond King Gold is nothing you’ve not seen before. The slot takes place in the middle of the African Savannah. It is brought to life with bright blue and green colors, but other than being very colorful, the graphics here are fairly standard. A lion sits at the side of the reels and roars into life from time to time, while the symbols on the grid are a selection of animals that you can find in this environment.

The Diamond Kong Gold slot takes place on a 5x4 game grid. The game has 1,024 different ways to win, all of which are active on every spin. You will notice a highlighted box in the middle of the grid when you load the game up, this is essential to the game and is used to launch some of its biggest wins and its bonus features. To get the reels spinning, players will need to first adjust their stake using the chip icon in the left-hand corner of the game. A minimum wager of $0.25 and a maximum wager of $25 are allowed, which is the kind of range that will attract players on lower budgets.

The simple design of the Diamond King Gold mobile slot game keeps things nice and smooth when the game is transitioning onto mobile devices. Like most top slot games in USA, the slot runs on both Android and iOS operating systems, and it can be played in both portrait and landscape mode on whatever device a player opts to use.

The slot, quite literally, roars into life with its bonus features. As we mentioned, there is a highlighted 3x2 square in the middle of the reels. This is the Power Range square. Whenever a Wild win is secured in this area, it is rewarded with a 2x multiplier.

The Power Range can also be increased when the lion at the side of the reels roars with the Roar feature. The Power Range will then cover all of the middle three reels and will award up to a 5x multiplier for winning Wilds.

Any Wilds that land on the grid are also collected above the reels. When players fill the Diamond Meter, they will be given a chance to win the Diamond Jackpot. There are four fixed jackpots above the reels. The green pays out 20x the stake, the purple pays 50x, the ruby pays 200x, and the Golden Jackpot is the highest, paying out 10,240x the player’s stake.

Finally, there is the Diamond King Gold Free Spins bonus. This is launched by landing three or more Scatter symbols. Three, four, or five Scatters will launch 10, 15, or 20 spins respectively. During the round, the Roar feature is also active. In the round, players can collect Golden Lions symbols in order to get rid of lower-paying symbols and turn them into the higher-paying Lion.

It is also possible to buy your way into the Bonus Spins round. Players can buy a spin on one of three bonus wheels, each offering a different potential number of spins and Golden Lions.

The biggest win that is on offer when playing the Diamond King Gold slot for real money is the Golden Jackpot. It coughs up a solid 10,240x the player's stake. The RTP of the slot is a strong 96.44%, putting it above the industry average. The slot is considered highly volatile.

Diamond King Gold Slot is not going to make a huge impact for Global Games, but it is a solid little title. While the design is fairly uninspiring, the Power Range mechanic gives the slot a different feel, and the other bonus features bounce off it well. There are never going to be any complaints from us about jackpots either. On the whole, it’s a solid little slot game to try at the best New Jersey online slot sites and top Pennsylvania online casinos but not one that is likely to pull any trees soon.

Who made the Diamond King Gold online slot game?

The Diamond King Gold online slot game was released by the team at Global Games. Global Games is a newer name on the market that announced its arrival with the acquisition of Microgaming.

What is the Power Range?

The Power Range is a feature that highlights six blocks in the middle of the grid. Whenever a Wild is part of a winning combination in this, it is doubled.

Can I play the Diamond King Gold slot for real money?

Yes. Diamond King Gold can be played at a selection of top online casinos for real money. If you need a casino to play the slot, then you can check out our range of detailed online casino reviews elsewhere at SlotSource.

Is there a Jackpot in Diamond King Gold?

Yes, there is! The Diamond King Gold online slot has four jackpots that can be won in the game. These are won by filling the Jackpot Meter at the top of the screen and then matching symbols in a mini-game.

When was the Diamond King Gold slot released?

The Diamond King Gold game was released in August 2022.

What is the Wild Symbol in Diamond King Gold?

The Wild Symbol in the Diamond King Gold online slot game is the Diamond Symbol. Whenever one of these lands, it is collected in the Diamond Meter above the reels to help launch the jackpot feature.

How many ways to win are there in Diamond King Gold?

The Diamond King Gold online slot game has a total of 1,024 different ways to win that are active on every single spin.

Can I play Diamond King Gold on my mobile device?

Yes, you can! The Diamond King Gold slot can be played on a range of different mobile devices and screen sizes. The slot is supported on both Android and iOS operating systems and runs smoothly regardless of the mobile browser.

Can I buy a bonus in the Diamond King Gold slot game?

Yes! The Diamond King Gold slot game has a Buy Bonus feature. Players can buy a spin of one of three wheels, with each one offering more Free Spins than the last.

What does the Golden Lion do in Diamond King Gold?

The Golden Lion symbol is active in the Free Spins round. Whenever it is collected, the symbol will remove one of the lower-paying symbols and turn it into a higher-paying Lion symbol.