Sizzling Gems is one of the hottest online slot machines in the Novomatic range. It’s a classic fruit machine with a difference, where the traditional cherries, watermelons and grapes are given a ... Read Review 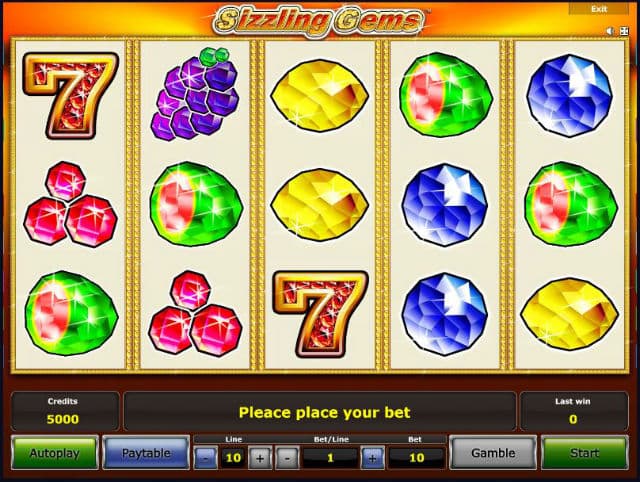 Sizzling Gems is one of the hottest online slot machines in the Novomatic range. It’s a classic fruit machine with a difference, where the traditional cherries, watermelons and grapes are given a diamond-effect finish. Unlike most older style games, you can play the Sizzling Gems slot on a PC, iOS, or Android mobile, where it joins hundreds of others from Novomatic at some of the top-rated casinos.

This is a five-reel game, crossed by just five paylines. Land the bling-y items of fruit across at least three reels on a line to win a prize, aided by a valuable wild symbol that stands in for others if needed. The Sizzling Gems slot machine also comes with a scatter symbol that pays in any places, and there is the option to multiply wins in an exciting double up game. Spin up the perfect combination of symbols and you can claim a huge 500,000.00 maximum win.

Although you might be used to playing slots packed with bonus features, the simple delights of spinning reels and hopefully collecting prizes, with the minimum of distraction, is still hugely popular. That’s why the Sizzling Gems slots game has kept its appeal ever since it was launched back in 2014.

One of the biggest advantages of playing slots on a PC, Android, or Apple mobile device, is that you don’t even have to leave home. But you also tend to get a much wider variety of games at online sites, as they are not limited by the size of the casino floor, only the size of the internet, which is pretty big.

You can enjoy lots of traditional fruit machines at online casino sites which carry the Novomatic portfolio, as this developer is perhaps the best-known authority on these classic games. But the Sizzling Gems online slot adds a sparkling difference, with bright jewels shining out from the reels. It’s a cool effect, and while it’s little more than a gimmick, if you want a change from the usual picture symbols, or just like glitz, it’s a great choice to have.

Talking of choices, you have a wide range of bet sizes to pick from. Casual gamblers will appreciate the fact that just 0.50 is needed to spin the reels, while higher rollers can stake as much as 1,000.00 per spin. That means the bet per line can vary from 0.10 to 200.00, with a huge range of options in between.

As well as a wide bet range, the Sizzling Gems online slot lets you spin the reels automatically, which is useful if you don’t want to click a button each and every time. Unusually, you can listen to basic fruit machine noises, a music soundtrack, or both at once, and of course, choose the volume to suit your preference.

Perhaps the best option when you are playing the Sizzling Gems slot from Novomatic is the choice of accessing the game on a desktop computer, laptop, Android or iOS smartphone or tablet. Don’t worry about any loss of gameplay or options, as it was designed from the start to works on mobiles and everything is identical across all platforms.

Click the Pays button at the top of the game to see how much each symbol is worth. In many ways, the Sizzling Gems slot sticks with tradition, with the cherries worth the least, and red 7 worth the most. Cherries pay just 5x, 15x, and 50x the amount staked on each line when landing on three, four, or all five reels across a payline. The red 7 on the other hand, is valued at a huge 40x, 200x, and 500x for the same combinations.

The red 7, with its shiny gold surround and glittering diamonds, is also the wild symbol of the Sizzling Gems online slots game. It can act as any fruit symbols to fill gaps in a continuous run or extend a winning combination further across the reels for a bigger prize.

Like most Novomatic slots, the Sizzling gems game lets you gamble prizes. 'Take the Risk' option after a win and you double the prize by clicking on red or black buttons as a playing card quickly flips from one color to the other. Of course, get it wrong and you end the round with nothing.

While much of the success of the Sizzling Gems online slot from Novomatic is down to the bling decorating the symbols, it comes with equally sparkling gameplay. It’s a simple, straightforward game and that’s just what fans of fruit machines are looking for. The medium to high volatility can see quite a few spins between landing winning combinations, but the other side of this coin is that prizes can be quite high value, so it’s worth the wait.

If you really want a few more features from your fruit machine, then try the Fruitoids slot from Yggdrasil. It’s a five-reel, 25-line game where fruity symbols trigger reel re-spins with big win multipliers.

These top video slots are real gems and can be found at some of exceptional online and mobile compatible casinos. Check out the ones we’ve found and get hold of some precious bonus funds or free games as part of their generous welcome offers.