Punk Rocker was a slot that catapulted Nolimit City to the iGaming stratosphere. It was a massive hit for the now-famous studio that outlined all of its potential. A few years after ... Read Review 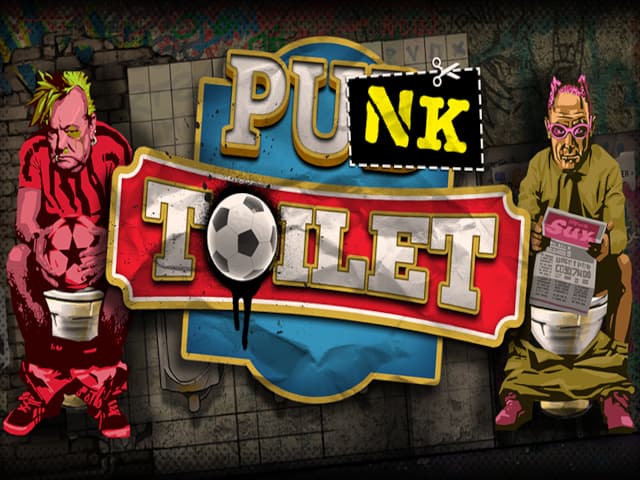 Punk Rocker was a slot that catapulted Nolimit City to the iGaming stratosphere. It was a massive hit for the now-famous studio that outlined all of its potential. A few years after the original, NLC is back for more punk with a sequel called Punk Toilet.

It’s another punk-themed bonanza right from the get-go. A highly volatile follow-up to the Punk Rocker slot, this one has 81 paylines too paired with an RTP of 96.09% and high variance. This time, the maximum winning projection is set at 33,333x the wager, making it twice more lucrative than the original.

In visual terms, Punk Toilet follows the same aesthetics. It’s obviously set in the era of UK punk when great bands such as Sex Pistols ruled the scene. That much is obvious at first glance – from highly drawn-up symbols of pop-culture heroes to urinals and P!ss spins, this slot is as punk as it gets.

Nolimit City slots are never typical when it comes to design and layout. Punk Toilet is no different. Visually, it is set in a toilet, probably in an underground railway station. Punks have obviously ruined it with graffiti on the doors and a beat-up glory door.

The symbols are as punk as it gets too. It’s the same set used in the Punk Rocker slot, with a few visual differences. A set of low-win card royals is stylized as graffiti. The cast of character premiums include drawn-up versions of Albert Einstein with a mohawk, Stephen Haw-King, Sex Pistols’ Johnny Rotten himself (or a lookalike), and other Anarchy in the UK-inspired scrabbles that take a piss on pop culture.

Of course, the slot’s soundtrack is a theme with bad production in the true nature of punk.

The Punk Toilet real money slot US is available on a wide range of mobile devices at the best mobile slot sites. You can play it through a mobile browser on Android and iOS smartphones and tablets thanks to the HTML5 platform it was built on.

How to Play the Punk Toilet Slot

To start playing the Punk Toilet slot, you’ll need to place a wager first. Your options range from $0.20 to $100 per spin, with a variety of options suitable for all kinds of players. In typical NLC fashion, the slot has an unusual reel setup, although it shouldn’t be hard to play it at all. The number of winning ways starts at 81 on each spin, but it’s variable as you mash the Spin button. You’ll see the number of ways to win displayed on the left.

It wouldn’t be a Nolimit City slot if it doesn’t feature at least a few gameplay mechanics. Punk Toilet relies heavily on the xWays mechanic with more than a few special features. On the bottom of each reel, you’ll see a locked urinal cell. Whenever unlocked with 1 or 2 Scatters, the urinal cell will reveal an oversized version of any symbol except for Haw-King. The Scatter Symbol will turn into a Wild Beer Symbol in the character’s hand as they take a leak on the urinal with pants down.

In the lower portions of the 5th reel, you’ll see a Glory Door that covers the three lower positions. To open it you’ll need the Loo Symbol that only lands on the last reel. When that happens, two options are in play:

• Haw-King: a 3-high Haw-King Symbol is revealed, turning all the Character Symbols on the reels to itself.

xWays Symbols reveal random regulars or Wilds, with their size ranging from 2 to 6 symbols. Splits are common for NLC slots including Punk Toilet, Slicing Symbols in multiples that pay more.

Oh, and before we forget – you can knock on the Glory Door at any time and see what happens.

Landing 3 Scatters on reels 2, 3, or 4 will give you 6 P!ss Free Spins. During the Bonus Round, the urinal cells are open and reveal oversized Character Symbols. Land a Scatter during the Bonus and you get an extra spin. The Bonus also comes with an Active Multiplier on the urinal cell. If you’re lucky enough to land the Loo Symbol during the P!ss Free Spins, it will trigger the Glory Door positions and give you two extra spins while upgrading the Bonus Round to $h!t spins.

This slot bonus starts with 8 spins with all the P!ss Free Spins features active. The only difference is that the Glory Door is always open, giving you bigger and better opportunities to win big.

Hitting the max payout is a feature called The Big Black Hole and occurs when you land a win of 33,333x your wager. Haw-King will swoop onto the screen and award the maximum payout. The highly volatile slot has a solid RTP of 96.09%, with the hit rate being decent thanks to the special features.

Punk Toilet is more than a worthy follow-up to Punk Rocker. It ups the ante and the payouts, while featuring a theme many will find controversial. It’ll sit right with punk rockers, though, with all the graffiti on the loo and the nasty punk aesthetics.

If you’re looking for a modern slot game with great visuals and vibes, Punk Toilet is a game you shouldn’t miss at the best New Jersey online slot sites and top Pennsylvania online casinos.

Who developed the Punk Toilet slot?

The Punk Toilet slot was developed by Nolimit City. It’s one of the most popular slot makers in the industry and the studio behind hits such as Punk Rocker and East Coast vs. West Coast.

The RTP of the Punk Toilet is set to 96.09%. It’s in line with the high volatility and the volatile features that can pay great sums of cash.

What’s the lowest wager I can place on the Punk Toilet online slot?

The lowest wager you can play for is $0.20 per spin. You can go as high as $100 per spin in different denominations.

Is there a Punk Toilet Free Spins Round?

Yes, there are two different Free Spins modes. You start with P!ss Free Spins with special features activated during the round. This round can be upgraded to $h!t spins where the Loo door is always open.

What’s the maximum win I can hit in the Punk Toilet slot?

You can win a maximum of 33,333x your wager in the Punk Toilet slot. That’s over double of what Punk Rocker offered.

How does the xWays engine work in the Punk Toilet slot?

The xWays engine is a mainstay in Nolimit City slots. Whenever it lands on the middle reels, it will either reveal a regular symbol or a Wild. The size of this symbol ranges from 2-6, and it can be affected by xSplits, Mega Splits, or the character symbols revealed from the Glory Door.

Can I play the Punk Toilet slot on my phone?

Yes, you can. The slot is produced on the HTML5 platform and is playable on Android and iOS devices straight from your mobile browser.

Do I need to download an app to play it on the go?

No need to download any app or software to play the Punk Toilet slot on your phone. Head to your favorite casino and play it from a mobile browser.

Which slots are similar to Punk Toilet?

The closest slot to Punk Toilet is Nolimit City’s mega-hit Punk Rocker. It has the same aesthetics and vibes but doesn’t pay nearly as much as this one.

When was the Punk Toilet slot released?

The Punk Toilet slot was released on February 8, 2022.