Nolimit City has established itself as the most promising slot developer in recent times. The popular studio excels in slot design and gameplay mechanics that can deliver wins worth hundreds of thousands ... Read Review 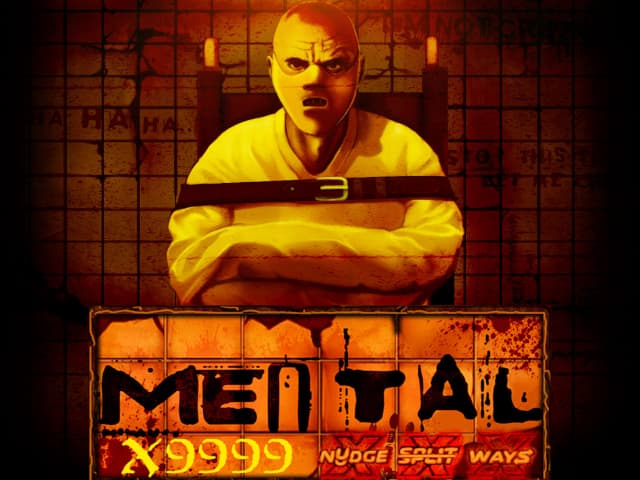 Nolimit City has established itself as the most promising slot developer in recent times. The popular studio excels in slot design and gameplay mechanics that can deliver wins worth hundreds of thousands of your wager. A slot developer that’s not afraid to venture into the unknown, Nolimit City is back with a new slot hit called Mental.

As the name suggests, everything is truly bonkers in this slot. From the unusual number of paylines to the rare theme and fantastic winning opportunity, Mental is well on its way to becoming Nolimit City’s next big hit. It features a crazy crew of characters in a dark setting with unique gameplay modifiers that can lead you to massive wins.

The Mental slot is available for free and real money in any Nolimit City casino. Try it for free first because things are going to get absolutely mental when you play for real money.

Mental is a 5-reel slot with a different setup than what we’re used to seeing. The symbols vary in height, and so does the setup. Nolimit City has done similar slots before – for example, Tombstone has a 2x3x3x3x2 setup as well. There are various mechanics in play in the slot, including Nolimit City’s xWays, xSplit, and xNudge mechanics.

Before we take a deep dive into the gameplay, let’s look at the visuals. Mental is a truly disturbing slot that’s on the verge of horror. It’s set in an asylum with scary patients unleashed on the reels. The Hannibal Lecter-lookalike pays the most, paying 5x your stake for five of a kind. There are other scary patients, too, along with a skeleton hand and a group of lungs. The sepia filter on top of the slot makes things even creepier, just like the soundtrack.

Nolimit City has done a truly immersive job with the visuals, so you won’t just be spinning the reels when you play – you’ll be heading to the asylum too.

The Mental slot was developed on HTML5 tech, so it’s available across a range of Android and iOS devices. Simply open it through your browser and play it for free or for real money with no download required.

To start the journey through the creepy mental asylum, you will have to place a wager. Your options range between $0.20 and $70 per spin, varying enough for players from all walks of life. The controls are located right beneath the reels, so you shouldn’t have trouble playing the slot.

When playing a Nolimit City slot, you should be aware that the studio always mixes things up with several unique gameplay mechanics. The first one you’ll notice is the Fire Frames feature. On each spin, 1–13-reel positions can ignite in flames, splitting those symbols in 2. This is the xSplit mechanic, which is called Fire Frames in this slot.

On the bottom of reels 2 and 4, you’ll find special symbol positions known as Enhancer Cells. If you land 4 or 6 Fire Frames, these cells turn active. They can reveal different modifiers, including regular Wilds, xWays or xSplit symbols, an xNudge Wild, a Patient symbol, or a Dead Patient symbol.

The last feature that you can trigger in the base game is called Mental transform. To trigger it, you’ll need the spider on reels 2 and 4. The Spider symbol can transform into a Wild, Patient, Dead Patient, xSplit, or xWays symbol, significantly boosting your wins.

Land 3 Scorpion Scatters on the same spin, and you’ll get 8 free games to start with. Any extra Scorpion in a Fire Frame will add an extra spin to your tally.

Up to 5 Fire Frames are added to each reel during the Free Spins round, and they don’t reset between spins. The Autopsy free spins can be upgraded to Lobotomy or Mental free games, which offer even higher rewards.

• Lobotomy free spins: triggered by 3 Scorpions and a Spider on the same spin. You get 9 free spins with spider symbols triggering the Mental Transform feature. All other modifiers are active in this round as well. Dead Multipliers are also in the mix to spice up your wins.

• Mental free spins: triggered by 3 Scorpions and 2 Spiders. You get 10 free games with Fire Frame Scatters adding to your free spin tally. In this Bonus Round, Spiders are sticky and can trigger Mental Transform extras. Dead Multipliers rise by +1 as new mental patients are uncovered.

The RTP of the Mental online slot is pretty average at 96.08%. The slot is very high in volatility but features several gameplay mechanics and bonuses that can spice up your wins. With all modifiers unlocked, you can win a prize worth 66,666x your stake in the bonus rounds.

Nolimit City always surprises us with cool slots, and Mental definitely qualifies as such. We’d go so far as calling it one of the studio’s best works, albeit a bit creepy for some players. The gameplay is truly spiced up with a set of cool features and bonus rounds that will send chills down your spine.

They’ll also send bags of cash your way if you’re lucky, making the Mental slot a masterpiece you should definitely try at the best Pennsylvania online casinos and top New Jersey online casinos.

Who published the Mental slot?

The Mental online slot was published by Nolimit City. Hailed by many as the most promising slot studio, Nolimit City excels with brilliant slot design and high-paying features. All of that is on display in Mental.

Don’t let Mental’s supposedly low RTP of 96.08% fool you. This is a slot with unique gameplay mechanics and several bonus rounds that can deliver wads of cash.

What’s the minimum wager I can place on the Mental slot?

The minimum wager you can place on the Mental slot is $0.20 your stake. That should be low enough for new players and those who like to test the slot before playing for real money.

Does the Mental online slot have free spins?

Yes, it does. The Autopsy free spins are accessed by landing 3 Scatters. Those can be upgraded to Lobotomy and Mental free spins, which require an extra symbol besides the Scatters.

What do the Dead Patient symbols do in the Mental slot?

The Dead Patient symbols trigger a Multiplier feature. Land 2 of these symbols and a Multiplier will boost your reward up to 9,999x your wager.

How does the xSplit mechanic work?

The xSplit mechanic in the Mental online slot is called Fire Frames. It occurs randomly on each spin, igniting symbol positions that split a symbol into 2, giving you more ways to win.

Is the Mental slot available on mobile phones?

Yes, it is. The slot was developed on the HTML5 platform and is available on a wide range of Android and iOS devices.

Do I need to download the Mental slot to play it on the go?

No, you don’t. You can play the slot via a mobile browser with ease.

What’s the best online casino where I can play the Mental slot game?

That depends on your preferences. We’d check all reputable Nolimit City casinos if we were you. Competition is heavy these days, so make sure to find a casino that has top features and a range of bonus offers.

When was the Mental online slot released?