The Vikings are back and they’re ready to cause a stir in NetEnt’s latest Norse slot quest found at the best Pennsylvania online slot sites and recommended New Jersey online casinos! If ... Read Review 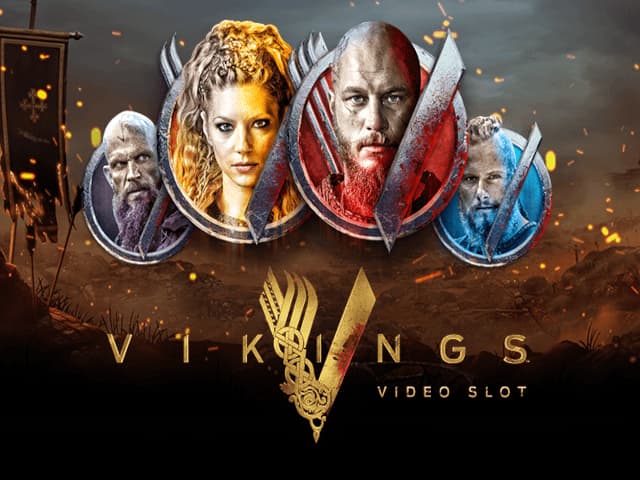 The Vikings are back and they’re ready to cause a stir in NetEnt’s latest Norse slot quest found at the best Pennsylvania online slot sites and recommended New Jersey online casinos! If you thought that the battle had ended with the cult classic Vikings TV show, then consider yourself mistaken, as it’s all about to take off in the epic Viking’s video slot by NetEnt where your favorite characters will be making an animated comeback.

The graphics and soundtrack remain true to the nature of the Vikings TV show, which was a hit within itself, so do expect to see some of the fierce and familiar characters throughout the game.

Dropped into the mix back in 2018, it should come as no surprise that this epic battleground adventure is set on a 5x3 grid and comes with a highly volatile nature and an RTP of 96.05%.

Grab your shield, this Viking slot will send you to war and back whilst equipping you with 243 ways to win across all angles of the battle grid. There’s maximum multiplier wins worth 607x to claim, with wins worth 10,000x the stake available when the Raid Spins feature has become activated.

This fierce and fired-up slot quest can be enjoyed across a multitude of platforms, such as desktops, laptops, smartphone devices, and tablets. The Vikings real money slot is supported by all of the major operators, including iOS, Android, and Windows, and can be played at our recommended mobile casinos.

How to Play the Vikings Video Slot

There are a total of 10 paying symbols, all of which can be collected to form winning combinations. There are 5 low-paying symbols and 5 high-paying symbols to collect in this game. Keep your eyes peeled for these symbols, which are characterized by playing cards and alphabet letters. The higher paying symbols will have the famous Vikings themselves making an appearance on the grid, as you create the winning formula. Be sure to get your hands on the Vikings logo symbol, which pays 0.5x the wager when you form a combination of 5 of the same symbol.

The higher-paying symbols form stacks throughout the base game and also when the Free Spins feature has been activated.

The game can be played from as low as 0.20, with the minimum wager increasing to a maximum wager of 100.00 in your respective currency.

Before you read on, check out our recommended best welcome bonus deals!

The Hotspot Feature. To trigger the Hotspot feature, a Vikings symbol would need to land on a hotspot on reel 3. This feature can pave the way for even bigger wins when a total of 3 have been collected.

Free Spins Feature. For an extra dose of delights, the game has an interesting Raid Spin feature. To activate the feature, players need to land a total of 3 Raid Spin Symbols on the reels. This transition is followed by an expansion of the reels, which transform to 5x7, making way for a staggering increase of 78,125 ways to secure the wins. Reels 3,4 and 5 will become the winner's hotspots during the feature.

The Vikings video slot has been formed on a high-volatility foundation and boasts a default RTP of 96.05%. During the base game, players can secure maximum multiplier wins of up to 607x the original stake. The maximum wins can increase as high as a wondrous 10,000x the wager when the Raid Spin has been activated.

The Vikings slot boasts striking audiovisual qualities, remaining true to its original TV show. Players are likely to become their own winning warrior, given the brilliant bonus features which significantly boost the chances of bagging some wondrous wins whilst in action during the slot.

When playing with the most reputable online casinos, players can expect to leave with 607x the wager, which can increase to 10,000x the stake when the Raid Spin is active. We’d say there are plenty of ways to fuel forth towards your very own fortune since your chances of winning big become multiplied when the Raid Spin feature has been triggered.

If you enjoyed battling upon the watchful eyes of the Norse gods, then it’s safe to say that you’ll love a similar slot pick, such as Pragmatic Play’s Book of Vikings online slot, which can be played for free at most online casinos and offers its own set of fierce mysteries to resolve.

This slot keeps the famous TV show concept alive, taking us back in time on one hell of an adventure in the middle of a battleground filled with all sorts of benefits, based upon the successful collection of the game's select few high-paying symbols.

The Vikings video slot is another fierce creation formed by NetEnt – a premium software provider within the gaming industry.

When was the Vikings video slot released?

The Vikings online slot machine was released in 2018.

Is there a sequel for the Vikings video slot?

Unfortunately, there is no sequel for the Vikings video slot.

Which are the highest-paying symbols in the Vikings slot?

The highest paying symbols within the game are the Viking symbol itself, as well as all other symbols that contain the famous characters.

Can I play Vikings on my smartphone?

The Vikings slot can be enjoyed across all major devices including smartphones.

Is Vikings a high-volatility slot?

Yes, the Vikings slot is a high-volatility game.

What is the minimum wager required to play the Vikings online video slot?

The minimum wager is 0.20 in the Vikings video slot.

How can I win in the Vikings video slot?

To win in the Vikings video slot, be sure to form symbol combinations with the symbols that are at the higher-paying end of the spectrum.

Is Vikings a good slot game to play?

The Vikings video slot is a great game to play, with some very rewarding bonus features and overall ability to win big.

What is the maximum wager in the Vikings slot?

The maximum wager is 100.00 in your respective currency.