Every entertainment industry has its ageless classics. Hollywood has flicks like The Godfather and the Shawshank Redemption among many others. The music industry has David Bowie’s hits to celebrate. In the comics, ... Read Review 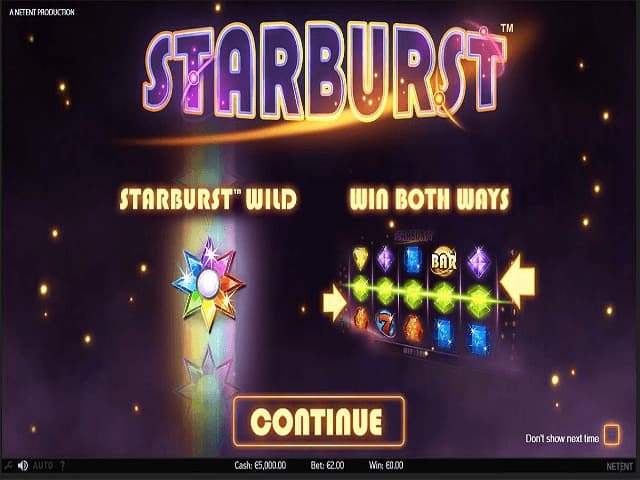 Every entertainment industry has its ageless classics. Hollywood has flicks like The Godfather and the Shawshank Redemption among many others. The music industry has David Bowie’s hits to celebrate. In the comics, Batman and Superman are legends that will continue selling even if time stops. When it comes to the best online slots, NetEnt’s Starburst has that kind of legendary presence.

A low-volatile wonder, Starburst is still going strong a decade after its release. It manages to impress new players and veterans too with its Starburst Wilds and the frequency of wins. You won’t be scoring enormous amounts in this one, but you’ll definitely hit wins more often than you think. That’s its most impressive feature together with the 10 both-way paylines.

It’s also one of the simplest slot games you can play, bringing together old-school slot elements with modern features. That nostalgia is part of the genius of this star of a slot game, and the reason why it’s been going strong for that long.

Starburst isn’t one of those complicated online slots, and that’s the reason why we all love it. It’s got a standard 5x3 setup with sevens, BARs, and starry gems on the reels. All the controls are set beneath the slot like you get with most NetEnt slots. As a result, the slot is pretty easy to play regardless if you’re a new player or a seasoned vet.

Everything’s great in audio-visual terms as well. The shiny and polished gems look great for an older gem, and that spacy soundtrack suits the setting perfectly. It’s the ideal combination for a slot game – immersive graphics and audio that will get you in just the right mood to play it.

The BAR is the highest-paying premium, delivering wins of 250x for five. It is followed by the Seven which pays less, and the four low-paying space gems. The game has no other symbol apart from the special Starburst Wilds which we’ll talk more about below.

Starburst is a pretty modern slot when it comes to its availability on different platforms. You can play the Starburst mobile slot on the go via your favorite mobile browser on any Android and iOS device.

How to Play Starburst Slot

Ready for your space adventure? Set a bet from $0.01 to $100 by playing around with the levels and coin value. You can set the bet right where you want it. When you’re ready it’s time to hit the Spin button which is expertly placed in the center of the screen beneath the reels. You can use the Max Bet feature on the right to max out your bets in an instant.

Starburst has vintage slot machine vibes, so don’t expect plenty of features. The base game plays just like you’d expect. Lining up three or more instances of the same symbol will give you a nice payout. Wilds can step in to complete winning combinations, but in this iconic slot, they come with a twist.

The Starburst Wilds can only land on reels 2, 3, or 4. Whenever they do, they expand to cover the reel and trigger a respin. The maximum number of respins is three, but if you’re lucky for several Starburst Wilds to land on the reels, you’ll hit pretty nice returns. Let’s not forget that this is a low volatile slot game with 10 bothway paylines. Wins are formed left to right and vice versa, so the overall winning potential is much higher than you think.

When it comes to slot bonuses there are no special bonus rounds in the Starburst slot to trigger. The only bonus feature is the Starburst Wilds which are active in the base game and need no trigger. Whenever a Wild lands it covers the reel fully and starts the respins, and this happens way more often than you think.

Due to that and the low volatility, it’s the perfect substitute for the lack of a Free Spins Round.

Starburst’s RTP is set at 96.09%, more than the average for slots of low variance. The 10 each-way paylines can deliver wins of 600x the bet, which you can only hit with expanded Wilds.

Starburst remains one of the most iconic real money slots of all time. It perfectly blends the simplicity of Vegas slot machines with modern Expanding Wilds and other features that can take your wins to the next level. It pays both ways, has the special Wilds, and most importantly, it’s a low volatile slot that can deliver win after win on almost every spin.

It’s still the king of slot games and will remain on the throne for years to come!

So if you’ve never played the Starburst slot so far, it’s time to hit those star-graced reels and enjoy the ride! If you happen to be based in New Jersey or Pennsylvania check out recommended NJ slot sites and best PA slot sites .

Who developed the Starburst slot?

Starburst is one of the top slots in NetEnt’s impressive portfolio. That says a lot about it. The Swedish giant is one of the leading providers in the industry, having released numerous iconic hits. Starburst is among the best of them all, which is why you should give it a try.

Is Starburst a highly volatile slot?

No, it isn’t. As a matter of fact, it’s on the other spectrum of slot volatility. This low volatile slot can pay pretty frequently as a result of the great math model and the 10 bothway paylines. There may be dry spells while playing, but those will be few and far between.

How many paylines does the Starburst slot have?

The Starburst slot has 10 paylines which are fixed. You’ll be playing for the top prizes at all times, and the great thing about these betways is that they pay both ways. You get payouts for three or more matching symbols left-right and vice versa, which aligns perfectly with the low volatility.

Can I win a jackpot in the Starburst online slot?

No, you can’t. This isn’t a jackpot slot, so there’s neither a fixed nor progressive jackpot on offer. But you have much better chances to win cash prizes than in a jackpot, and that’s what counts. With a bit of luck and higher bets, you can still win top returns.

Is there a Free Spins Round in the Starburst slot?

Surprisingly, there is no Bonus Round in the Starburst slot. On the other hand, it’s a great thing that there’s a special Expanding Wild feature in the base game which triggers pretty often. With the Starburst Wilds and the bothway paylines, you don’t need a bonus round.

What do the Wilds do in Starburst?

The Wilds substitute for other symbols in winning combinations. However, they also expand on the reel they land on and trigger a respin. The maximum respins you can win is three, which is more than enough to land some decent rewards.

Can I play the Starburst online slot on my phone?

Yes, you can. The slot is available on instant play platforms across a wide range of devices. This means that you can play it on Android and iOS devices from your favorite mobile browser as long as you have a stable Internet connection.

Do I need an app to play on the go?

No need to download anything to play the Starburst slot on the go. It’s a mobile browser slot that you can play easily from any device. Just head to your favorite NetEnt slot site, find the slot in the lobby, place a bet, and start playing.

Which slots are similar to Starburst?

Starburst is an iconic slot so it’s not worth comparing to others. Still, if you’re looking for alternatives, we’d go with NetEnt’s sequel/spinoff Starburst XXXtreme which pays a lot more. Bonanza by Big Time Gaming and Book of Dead by Play’n GO are just as legendary as Starburst.

When was the Starburst slot released?