This is the slot that will have you firing through the fiesta towards the luckiest future yet, by that, we mean NetEnt’s Spinata Grande slot, which can be played for free or ... Read Review 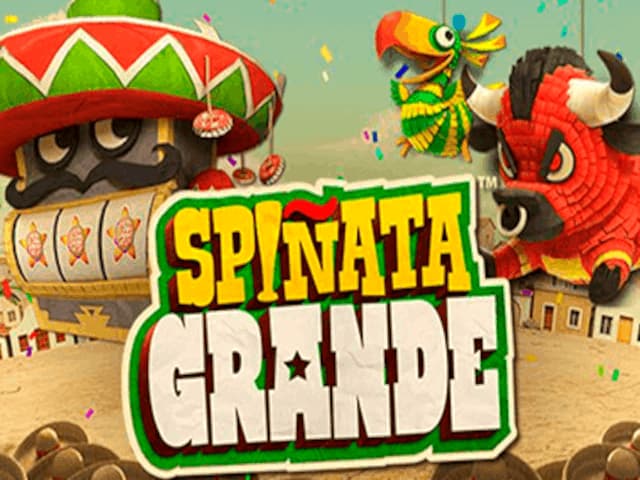 This is the slot that will have you firing through the fiesta towards the luckiest future yet, by that, we mean NetEnt’s Spinata Grande slot, which can be played for free or for real money at a whole host of top Pennsylvania online casinos and the best New Jersey online slot sites. As you take the pinata for a spin in this low-medium volatility video slot, you’ll find that there are 40 fortune-filled paylines to win across, as well as a whole host of bonus features hiding colossal cash rewards. Vamos! It’s time to salsa your way across this glorious 5-reel, 4-row gaming grid, where the sassy senoritas may just lead you to a maximum fortune worth 3,000x your total wager.

The 5-reel, 4-row gaming grid is stuffed with a variety of fiesta-themed symbols, fully-loaded with a vibrant backdrop revealing a beautifully designed and exotic Mexican city preparing for the celebration. The Mariachi soundtrack in the background will certainly have players in the mood for some serious partying and prize-hunting and rest assured that smashing the pinata will add an endless supply of entertainment and excitement to this slot experience.

The grids will award payouts when combinations of three or more of the same symbol have landed anywhere from left to right on the reels. The Red Bull Pinata Symbol is the one to watch, as it’s the highest-paying symbol within the game, offering an attractive payout of 300x the wager if you’re lucky to land three or more at once. Following on from this powerhouse of a paying symbol, the Pink Donkey will pay 200x the stake, the Green Bird symbol can pay 100x the stake and the Blue Fish pays 60x the stake. The slot also boasts a total of 10 very fitting alphabet symbols, which remain at the lower end of the game's payscale.

How to Play the Spinata Grande Slot

Whether you're playing the Spinata Grande slot for free or for real money, it guarantees an endless supply of fun. The vibrancy in the game graphics and the background track do their bit to ensure that the feel-good factor flows in throughout the game.
The Spinata Grande slot contains a user-friendly interface, where you can start spinning and winning with just the click of a button. Players will be presented with a quick demo video before beginning the game, then it’s simply a case of making the necessary adjustments to your stake, before pressing the Spin button.

The great news here is that players can get their party started across all devices. This included Android and iPhone smartphones, laptops, desktops, and tablets, meaning that you can celebrate your way through this slot from absolutely anywhere. The game is compatible with devices that rely upon iOS, Android, and Windows.

All symbols featured within the game can be transformed into Colossal Symbols and can appear to take up space of 2x2 or 3x3 on the reels. When the Bonus Round has been activated, the Colossal Symbols will substitute for the Wild, Start, and Pinata Symbols.

The Wild Symbol appears as a Sugar Skill within Spinata Grande and will be able to substitute for all other symbols, with the exception of the Scatter and Colossal Symbols. During the Free Spins Feature, the Wild can appear as the Colossal Symbol and can occupy 3x3 of the reels.

The Spinata Grande is a low-medium variance slot with an RTP of 96.84%, offering a greater chance of reaping the riches without the need for risk. The maximum multiplier payout of 3,000x the wager is possible for any player lucky enough to land wise wins through symbol combinations and by activating the slot bonus.

Players can expect nothing less from a NetEnt slot. The Bonus Features and Mini Game offer an exciting plot twist, thanks to the hidden symbols and rewards which can activate other features and cash prizes will more than likely act as an invitation for players to keep coming back for a little more pinata popping than usual.
The Spinata Grande slot is not only striking in terms of the audiovisual qualities but guarantees entertainment upon the usual excitement that might be experienced when engaging with any other celebratory Mexican-themed slots. If you enjoy the fiesta, why not try Big Time Gaming’s Extra Chilli Megaways slot.

Who created the Spinata Grande slot?

What is the RTP in the Spinata Grande online slot?

The Spinata Grande slot offers a Return to Player (RTP) of 96.84% given the low-medium volatility nature of the game.

What is the maximum win in the Spinata Grande slot?

You are in with the chance of securing maximum multiplier wins worth 3,000x their stake. To be lucky enough to win the maximum payout, you have to keep spinning the reels of the Spinata Grande video slot for free or real money at your favorite online casino.

What is the best online casino where I can play the Spinata Grande slot?

The Spinata Grande slot can be enjoyed from a wide range of premium online casino sites. It’s simply a case of registering at a casino that offers the best bonuses and rewards system. Check out the list of top-rated casinos on SlotSource!

What online slots are similar to Spinata Grande?

If you’d like a slot that is almost identical to the Spinata Grande slot, then you could opt for Pragmatic Play’s Chilli Heat or Chilli Heat Megaways. For more Mexico-themed adventures, try the Toro 7s slot by ELK Studios or the Puebla Parade slot by Play’n GO.

No, Spinata Grande is not a high-volatility video slot, it is of low-medium volatility meaning there’s less risk involved.

Should I always wager the maximum amount on the Spinata Grande slot?

The wagering range starts from 0.20 and can be increased to 200.00 in your chosen currency. When playing Spinata Grande, it may not be necessary to increase the stake to a maximum wager, but keeping a medium and steady wager would work well in this game.

Yes, if luck is on your side when playing the Spinata Grande slot for real money then you may just be in with the chance of winning some great cash prizes.

What’s the most I can wager in the Spinata Grande slot?

The maximum wager is capped at 200.00 in your respective currency when playing the Spinata Grande slot online for free or for real money.

What kind of Spinata Grande slot symbols will I find in the slot?

The Pinata and Animal Symbols are the highest-paying symbols within the Spinata Grande slot. There are also the regular Scatter, Wild, and Colossal bonus symbols.