One of the leading studios in the iGaming industry, NetEnt, is always busy improving its library. The latest release in its slot collection is called Rome: The Golden Age. As the name ... Read Review 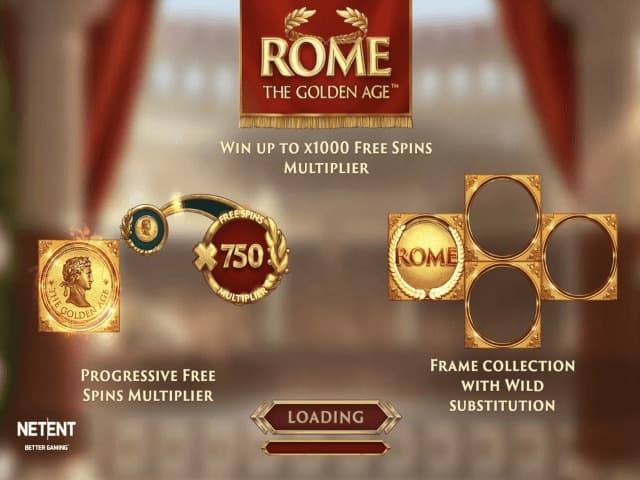 One of the leading studios in the iGaming industry, NetEnt, is always busy improving its library. The latest release in its slot collection is called Rome: The Golden Age. As the name explains, it’s a slot based on the ancient Roman empire, but don’t confuse it for a classic. It’s all modern features and sky-high payouts in this slot game, with a maximum reward worth 100,000x your bet.

The Rome: The Golden Age online slot will take you through the golden ages of the powerful empire. You’ll have a first-row seat to a bloody battle in a gladiator arena. It’s a visually-impressive slot title with plenty of tricks up its sleeve that you simply must try.

Play Rome: The Golden Age for real money right now, and you could win a reward as big as a jackpot.

The Rome: The Golden Age slot comes with 5 reels and a different symbol height for each. The diamond-shaped reel set is not just for show – it plays a role in the slot’s core gameplay.

In terms of visuals, NetEnt has outdone itself this time around. The Rome: The Golden Age slot looks pretty fantastic, with crisp-clear symbols and animations and a full-HD-rendered background. The reels are set against a backdrop of a Roman temple. The marble interior looks great, making the slot one of the best-looking ones in NetEnt’s catalogue.

The wild and tiger pay the most out of all symbols – 5x for five of a kind. The eagle follows them closely with half of that amount, while the other symbols pay less. Oh, and let’s not forget the great audio and sound effects that paint a pretty picture.

NetEnt is one of those developers who pays a lot of attention to the mobile features of its games. The Rome: The Golden Age slot is fully optimized at top New Jersey online casino sites and the best Pennsylvania online casinos with a great set of shortcuts and features that make spinning the slot on your Android and iOS devices a breeze.

To start spinning, you will need to set your bet first. The lowest you can go is 0.10 per spin, with the highest set at 50.00. The denominations go in tiny fractions, so there are plenty of options for all kinds of players.

During the base game, when a golden symbol lands on the reels, it will mark its position with a frame. These golden age symbols can turn randomly to a Rome symbol, with a frame being market as active. It will then turn into a wild for the next spin, with all adjacent positions turned to wilds too. This goes on for 5 times, with no active frames leaving the reels until they’re all turned to wilds or until the free spins round begins.

Thanks to this lucrative feature, Rome: The Golden Age’s base game isn’t just another main game. However, the real fun begins in the free spins round.

When you land 3, 4, or 5 scatters in the main game, you’ll get 3 free spins to start with. During the bonus round, every position except for the locked ones spins individually, with only Rome symbols allowed to land. Each position with an active frame that hasn’t turned into a wild will become locked and award random prizes at the end of the free spins round (up to 50x).

A Rome symbol that lands on an unlocked position in this round will award a prize up to 50x your bet and reset the free spins counter to 3. If all positions are locked at the end of the free spins round, you get an x2 multiplier award on all Rome symbols.

In the main game, whenever a Golden Age symbol lands on a position without the frame, you get 1 point in the progress bar. If it lands on an active frame, you get 1-4 points for the same bar. Whenever the bar reaches 200 points the free spins multiplier is upgraded progressively. It starts at x1, then x2, x3, x5, x7, and all the way up to x1,000.

Some other NetEnt classics, like the ever-popular Starburst online slot, maintain their popularity despite perhaps lacking a little in the bonus features department. It's great to see a game like Rome: The Golden Age feature so many!

The Rome: The Golden Age slot has a pretty average RTP of 96.06%. It’s a high variance slot, so make sure to keep an eye on your bankroll. Don’t let the average RTP fool you – you can earn a max reward worth 100,000x your bet if you’re lucky.

Whenever NetEnt releases a slot, you just know it’s going to be great. Rome: The Golden Age certainly doesn’t disappoint with its progressive multipliers and other features that can seriously boost your payouts. It may only have 20 paylines and an RTP of 96.06%, but make no mistake – it’s a slot that can certainly pay big money.

Enter the Gladiator arena and enjoy the duels. If you’re lucky, you can win a true Roman treasure.