Planet of the Apes Slot

Slots themed around movies are hugely popular and when the game in question is themed around one of the best film series of the last decade, it’s even better. Planet of the Apes ... Read Full Review

Play Planet of the Apes for Free Now!

NetEnt - Planet of the Apes 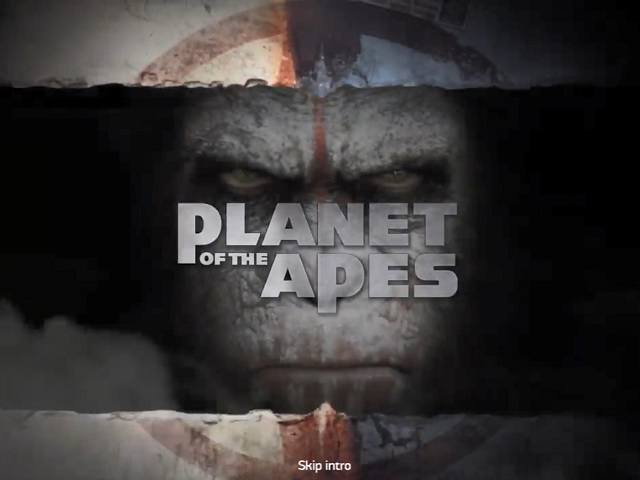 Slots themed around movies are hugely popular and when the game in question is themed around one of the best film series of the last decade, it’s even better. Planet of the Apes is a unique online and mobile optimized game from NetEnt that covers the first two films. A spectacular twin reels setup fills the screen of desktop PC, iOS and Android mobiles, and the action - packed gameplay matches the thrills of the movies.

Real images of the cast, including John Lithgow and Gary Oldman appear, along with images of Koba and head honcho, Caesar, who pay out the top prizes. Features include wins from reel re-spins, wild symbols, free spins with extra ways to collect prizes, and stacks of wilds that copy from one set of reels to the other.

If the apes are feeling benevolent, you can win up to 3,000x your stake, or a massive 600,000.00 if you play at the maximum possible bet level. It’s a lot to take in, but read through our Planet of the Apes slot review and get ready for some simian-themed spins and huge slot bonuses when you play it at a recommended NetEnt casino.

Load the Planet of the Apes online slot onto your Android, Apple, or Desktop device and you are confronted by 10 reels of cinematic symbols. The game is actually two slots in one, each with five reels, crossed by 20 paylines.

The left side reels are based on Rise of the Planet of the Apes and the second set on the follow up film, ‘Dawn.’ This slot came out in 2017, before the release of War’, although perhaps having 15 reels would be just too much to pack into a single game. As it is, the 10 reels still manage to look crisp and clear on even the smaller screen of a mobile smartphone, although you will need to have it in landscape mode to fit everything in.

You play both sets at once, for stakes of between 0.20 and 200.00 per spin. These values equal 0.5 to 5.00 on each of the 40 paylines spread across the two sets of reels. The layout might be a little complicated, but getting started is just as easy as it is with any NetEnt online slot games.

Just click arrow buttons to decide your bet level and coin values. Other buttons trigger an Autospin option, and the paytable is accessed by the little ‘I’ tab to the left of the screen.

While the higher-paying character symbols look fantastic, the lower-value playing card icons are pretty uninspiring. But they tend to pay out more often, so we won’t be picky. The three human characters from each film all pay 10x, 60x, and 180x your line stake when landing on three, four, or all five reels across a payline.

Being an online slot, this game pays back at a higher average percentage that you will be used to if you have only played land-based slots. It’s stated as 96.33% and the low to medium variance should lead to plenty of winning spins.

Gold ‘Rise' and red ‘Dawn’ wild symbols, each based on the patterns of Caesars’ window in the first movie, act as others to complete combinations. They also pay up to 600x the line bet. A Dual Feature can occur in any spin. A symbol is picked at random from one reel set and sticks in place after the spin. Any examples of the same symbol on the other reels will move across to the corresponding positions on the first, giving you a great chance to see new combinations formed.

Stacked wilds can appear on the ‘Rise’ reels and once any payouts are made, they move across to the ‘Dawn‘ set to give you another shot at a win. Caesar against the Golden GateBridge is a scatter symbol worth up to 1000x your line bet at top New Jersey online casino sites and the best Pennsylvania online casinos. Any three or more also launch a free spins round, where during the 10 games, all wilds that land on the reels collect. On the last spin, all collected wilds are placed back on the reels.

Any three or more images of Caesar from the second film launches the ‘Dawn’ free spins. 15 free games play out, during which you collect extra wilds, extra free games and win multipliers. These fill meters, activating their features when full.

Even if you have never seen the films, (and if not, you are missing out on some awesome movies), the Planet of the Apes real money slot game from NetEnt is an outstanding game. The twin reels setup is perhaps too complicated for total novices, but if you know how slots work, just think of it as doubling the fun. As they say in the movies, ‘Apes, together, strong.’

Few slots have quite as many features as Planet of the Apes, although NetEnt is well known for packing as much as possible into their games. We like the random in-game bonuses, such as the Dual Feature, but the different free spins rounds and instant coin wins are the real highlights.

If you like thrilling games, be sure to enter the Planet of the Apes at our favorite NetEnt online and mobile casinos.