Motorhead is one of several rock-themed online slots from NetEnt and joins Guns N’ Roses and Ozzy Osbourne at some of the best online and mobile sites. It’s themed, of course, around ... Read Review 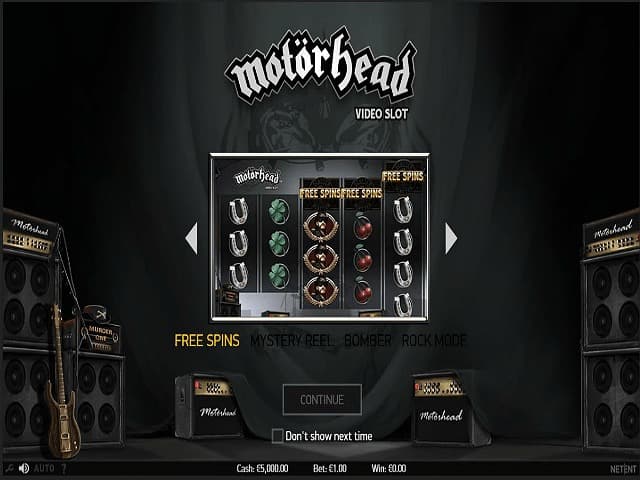 Motorhead is one of several rock-themed online slots from NetEnt and joins Guns N’ Roses and Ozzy Osbourne at some of the best online and mobile sites. It’s themed, of course, around the legendary British hard rockers, led by the late Ian ‘Lemmy’ Kilmister. He appears along with bandmates Larry Wallis and Lucas Fox across five reels and 76 paylines.

The Motorhead slot machine has an usual reel layout, where the number of symbols on each varies from left to right. Don’t worry about the unfamiliar setup though, as like all NetEnt games, it’s easy to play on PCs, iOS and Android mobiles, and has plenty of fun bonus rounds. You can unlock reels stacked with mystery symbols, trigger free spins and enjoy a special Bomber feature that blasts open some big winning combinations. The top prize is equal to 570x your total bet if you play for real money, which adds up to 114,000.00 if you have the maximum stake in play.

Alongside the impressive looks and exciting features, there is a soundtrack created just for fans of the band. You can play tunes such as Killed by Death, Iron Fist and of course, Ace of Spades as the reels spin. Motorhead were famously loud, but perhaps you should keep the volume to a sensible level when playing on a mobile.

You won’t have any trouble getting set up to play the Motorhead online slot machine. All 76 paylines are active, and you play with 30 coins. You win multiples of the coin value by landing three or more of the same symbol across a line from the left side. All you need to do is decide how much to stake on each spin, which can be anywhere from 0.30 to 200.00. That makes Motorhead a slot where just about everyone will find a bet level to suit.

Along with the wide bet range, there are options to spin the reels automatically, or play Motorhead in turbo mode, which suits the high energy tunes. If for some reason you don’t want to listen to the music as you play, unlike games at physical casino sites, where the volume is fixed, you can decide whether to blast your eardrums out, or play in silence. It looks and sounds great on desktop computers, laptops, Apple and Android mobiles. Motorhead is just part of the vast NetEnt range, and because online casinos are unlimited by floor space, they usually carry far more games than their landlocked equivalents.

Take a look at the paytable to see how much you win when identical symbols stop across a line from left to right. The first two reels on the left hold just three symbols each, with four symbols on the next two reels. The fifth reel is five symbols high, which is a strange setup, but works perfectly well. You’re not expected to remember how each payline runs across the game, but basically, three symbols in any places will be enough to collect a prize.

The reels sit on a stage, surrounded by amps, guitars and lighting rigs. The seven main symbols include cherries, four-leaf clover, bells, a gold star, and horseshoe. Lemmy is the most valuable symbol, worth 150 coins when he fills a payline.

The Ace of Spades logo is a wild symbol that acts as any of these to complete a sequence of matching symbols if needed. While the graphics are quite realistic, we would have liked to have seen all of the band members used as symbols. While Wallis and Fox appear in the background, they don’t actually land on the reels. It’s just our opinion and many people will like the familiar symbols used in so many other slots.

A special Mystery Reel feature is active in every spin at the best Pennsylvania online casinos and recommended New Jersey online casinos. At least one reel will be filled with mystery symbols and when they stop spinning these can transform into any other if it helps to create winning combinations.

You could also see a randomly awarded Bomber feature, where explosions across the reels leave at least 10 mystery symbols in their aftermath. These all turn into one type of symbol for the potential for big wins.

The Motorhead skull logo is a scatter symbol and if you see it in three or more places at once, you claim 10 free spins. It’s always good to see enhanced features during any bonus games, in in this case, the Mystery Reel will also hold wild symbols, so you should stand a better chance of claiming wins during the round.

This is a low to medium variance slot where, as an average, you can expect to claim back an exceptionally good 96.98% of your bets as winnings. That’s more than bricks and mortar casinos, with their expensive real estate to pay for can manage, and another reason why online games are so popular.

Fans of Motorhead will obviously be attracted to this game, but it would be a shame to miss out on some great features just because you don’t like the band. Mute the volume and enjoy some exciting features in every spin, plus the free games with extra winning potential. Alternatively, check out the Guns 'n Roses slot game if they're more to your liking.

Motorhead is one of several music-themed games from NetEnt, and if you like rock, then be sure to play the rest of the range. The whole portfolio of NetEnt slots, along with games from other developers, is found at some highly recommended casinos, which welcome you with bonus funds and free games.