Anyone for an extra dose of floral fever? NetEnt’s Flowers video slot will be serving up a treat of just that in time for the Spring season. Upon hitting the Spin button, ... Read Review 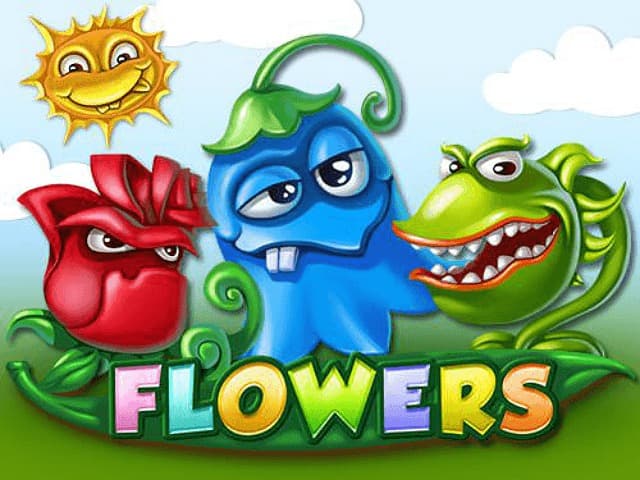 Anyone for an extra dose of floral fever? NetEnt’s Flowers video slot will be serving up a treat of just that in time for the Spring season. Upon hitting the Spin button, you’ll be struck by the level of quirkiness when observing the flowers, all of which are wearing different expressions from happiness to anger to confusion, all of which hide your share of the fortune and bonus features beneath the flowerbeds. This 5x3 garden game features a total of 30 active paylines, to form the perfect set of winning combinations across, all of which will have you hop, skipping, and jumping towards the maximum multiplier win worth 1,000x your stake. The Flowers slot can be enjoyed at the best Pennsylvania online slot sites and recommended New Jersey online casinos for free or with real money.

The Flowers slot is set on a 5-reel 3-row grid bursting with pops of color and welcoming animated flower symbols. The layout is considered fairly standard, so there is nothing new with regard to the appearance. The 30 paylines remain firmly fixed in place throughout the game and cannot be changed. The sounds and graphics are crisp and strong in terms of visual appeal, where you’ll be dreaming of summer days filled with the greenest grass, the clearest skies, and of course plenty of floral friends budding up all over the place.

In terms of symbols, expect to see some familiar faces, starting with the A to J playing cards, which are usually operating at the lower end of the paying scale. The higher-paying symbols consist of the flowers themselves: with the bluebell and the lily residing at the very top of the paying scale, followed by the Venus Flytrap and the Sunflower symbol. The Rose Symbol, being the moodiest flower of all, has the power to award 66x the stake, making it the winning symbol out of all.

Expect to see doubles when observing the symbols on the grid, especially with the flower symbols, where you may notice two together in some places on the reels.

The Double Symbols count can be viewed as two standard symbols, which means that you will be able to form the perfect winning combinations from an individual symbol and also a Double Symbol, which is of the same type.

Watch in wonder for the Wild Symbol which will be making its appearance on the reels as well and will substitute for all of the standard symbols. It’s worth noting that the wild will not substitute for any of the Double Symbols, but only the single ones.

How to Play the Flowers Slot

Before hitting the spin button, it’s worth noting that there are various adjustments to make before starting the game. The coin value can be adjusted from the bottom right-hand side of the screen, starting from 0.01 to 0.50. The game's level can be increased from 1 to 5, and adjusted from the bottom left-hand corner of the screen. The minimum wager starts at 0.30 and can be increased to a maximum wager of 75.00 in any respective currency. The Autospin button sits directly to the spin button which is located in the center.

If you want to spin the reels of the Flowers slot for real money, check out our list of the best payment methods!

You can get gardening from any chosen device. The Flowers video slot is compatible with iOS and Android devices, tablets, laptops, and desktops which are supported by Windows, so the fun can be accessed at the best new slot sites from absolutely anywhere!

The Flowers slot is listed as a medium-high volatility real money slot game, with a default Return-to-Player (RTP) of 96.32%. The maximum multiplier win is capped at 1,000x the stake.

Quirky slots are king for the following reasons: they uplift and keep you uplifted whenever you play them, they add that extra bit of sunshine to your life, and overall just seem to be able to keep you in that positive place. The Flowers slot has mastered all of the above, with the addition of cartoon characters appearing in the form of plant life. The audiovisual qualities of the game are striking and align well with the theme, although it’s not surprising since NetEnt always go above and beyond with the delicious design in their countless slot creations.

The out-of-this-world extras are what keep this slot interesting, when considering the double symbols, Free Spins will the generous addition of wager multipliers, and the addition of the Wild and Scatter symbols, ensures maximum entertainment throughout. However, the maximum payout reaching as high as 1,000x the stake is not the most notable and attractive feature of the game.

Why not try another NetEnt classic such as Jack and the Beanstalk? You’ll be climbing one mighty plant in that sense.

Who created the Flowers slot?

The Flowers online slot game was created by NetEnt, one of the major online slot providers within the online gaming industry, creating premium online slot games such as Gonzo’s Quest, Starburst, Twin Spin, Dead or Alive, and Divine Fortune Megaways.

What is the RTP in the Flowers online slot?

The Return-to-Player (RTP) within the Flowers slot is capped at 96.32% given the high-volatility nature of the game.

What is the maximum win in the Flowers slot?

If you strike it lucky with the Flowers slot, you can unlock maximum payouts which reach as high as 1,000x the stake or 75,000 coins.

What is the best online casino where I can play the Flowers slot?

You have the power to decide on that one! Why not have a look at the best online casinos with the best bonus offers and then start your Flowers slot journey from there. Check out the list of the most popular online slot sites here at SlotSource!

What online slots are similar to Flowers?

If adventures surrounding nature are your perfect choice then why not try the Jack and the Beanstalk slot by NetEnt or the Gator Gold Deluxe Gigablox slot by Yggdrasil Gaming.

Is Flowers a high volatility slot?

Yes, the Flowers slot is considered a medium-high volatility video slot, so get ready for high risks and maybe, just maybe some even higher rewards.

Should I always wager the maximum amount on the Flowers slot?

No, it’s not always necessary to wager the maximum amount when playing the Flowers slot. We’d suggest adjusting your wager according to your individual budget, playing style, and attitude towards risk and loss. Please remember the importance of responsible gambling.

Yes, you can definitely win real money when playing the Flowers slot with real money. If that isn’t an option, you can still enjoy the slot for free.

What’s the most I can wager in the Flowers slot?

The maximum wager can reach 75 in any respected currency when adjusting your wager on the games wager menu.

What kind of slot symbols will I find in the Flowers slot?

Expect to see the regular A to J playing card symbols, which sit at the lower end of the paying scale. The flower symbols are the highest paying in the game. Then there are also double symbols (mainly of the flowers) which increase the chance of unlocking bonus features and receiving great payouts.