Disco balls, great music, and crazy clothes – who doesn’t like the 1970s? The disco craze that took off around the world ended a long time ago. However, it has a special place ... Read Full Review 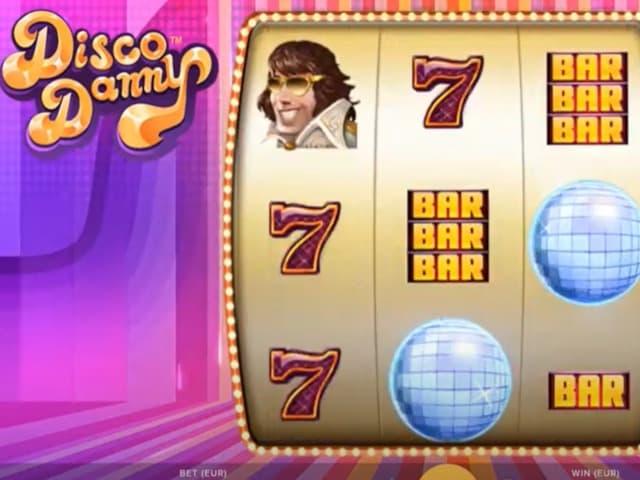 Disco balls, great music, and crazy clothes – who doesn’t like the 1970s? The disco craze that took off around the world ended a long time ago. However, it has a special place in pop culture, with many still not ready to give it up.

Over the years, we’ve seen many disco-themed slots that deserve a try. The latest in a long line is the NetEnt online slot called Disco Danny, a fun slot machine that takes us 40 years into the past. You will get your groove on across three reels in this high-volatility slot. Hit the dance floor and show off to win a prize worth 3,000 times your stake.

Put your dancing shoes on, spin the reels and try your best moves in the Disco Danny online slot. If you’re lucky, you can reel in quite the reward, and it’s even sweeter when you use the best slot bonuses available at Slotsource.

The Disco Danny online slot by NetEnt is based on simple three-reel classics. The reels are set inside a disco against a crazy violet background that fits perfectly into the surroundings. Of course, the reels are populated by familiar symbols such as bars and sevens, and of course, Disco Danny himself along with a spinning disco ball.

The layout and controls are pretty simple. The bet size is to the left and the Spin and Autoplay buttons are in the center below the reels. This game is easy to learn for players at the top New Jersey online slot sites or Pennsylvania’s recommended online slot sites.

The high-quality animated symbols go in line with the tunes. Spin the reels and the music will pick up to keep the rhythm going. Just like all recent NetEnt titles, Disco Danny looks amazing.

When it comes to the symbols, there are two scatters – a silver and golden disco ball. The disco king pays 100 coins on a win. Other symbols, including roller skates, bars and 7s pay less.

NetEnt online slot games have been praised for their mobile-optimized options and this one is no exception. It was developed on HTML5, so you can play on any Android or iOS device. It works seamlessly across all types of devices and doesn’t need to be downloaded at all. Thanks to touch-optimized controls, you can spin Disco Danny’s reels with ease.

Before you start spinning, set your bet size. The Disco Danny slot machine is suitable for beginners and high rollers, as you can pick between 0.10 and a whopping 250 coins per spin.

The base 3x3 slot game has only 5 paylines and is of high variance. If you get three disco kings, you will earn 100 coins on a bet of a single one.

A golden disco ball (scatter) anywhere on the reels in the base game will award a random win. The other scatter triggers the slot’s bonus free spins round. No wild symbol is present in the slot game, which is a bit of strange.

That doesn’t change anything, however. While the base game might be underwhelming for some players, the real disco action takes place in the free spins round.

The silver disco ball is the second scatter in the Disco Danny online slot. It triggers the free spins bonus round. You will get there with either three silver scatters or a combination of one golden disco ball and two silver ones.

NetEnt’s Disco Danny slot machine has a variable RTP of 96.04%-96.93%. Its hit frequency is 14%, indicating that it’s a highly volatile slot. The maximum real money slots winning potential is 3,000 times your stake, which you can achieve during the bonus round. That’s a max jackpot of 750,000 credits at the top stake.

If you love disco-themed slots, you’ll find Disco Danny a hit. While its base game lacks a few more special features, the multipliers during the free spins bonus round can take you closer to the maximum prize worth 3,000 times your stake – up to 750,000 credits if you play the max bet of 250. Play Disco Danny for real money and get your groove on to rule the disco landscape – and Slotsource can help get you started with the top no deposit bonuses on offer.