Thor, the god of thunder will be watching from clouded skies as you enter the kingdom of Asgard in Microgaming’s Norse mythology-themed slot, Thunderstruck. The slot game's RTP is 96.10% and the ... Read Review 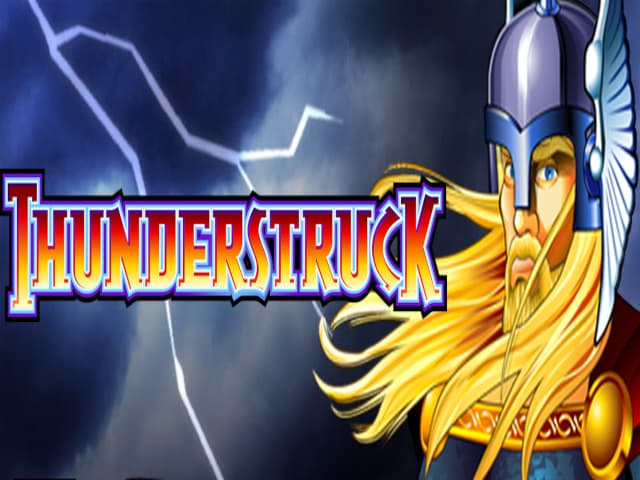 Thor, the god of thunder will be watching from clouded skies as you enter the kingdom of Asgard in Microgaming’s Norse mythology-themed slot, Thunderstruck. The slot game's RTP is 96.10% and the volatility is equally as medium as its deep and dark theme. The action will come down with a storm across the 5x3 grid, which consists of 9 active paylines to form winning combinations across.

As you enter into murky surroundings, you’ll notice a gray and overclouded backdrop with symbols containing horns, hammers, and lightning bolts, ringing true to the game's dramatic backstory. The cartoonish style of the game and its features has aged a little since its 2003 release, the maximum win potential of over 300,000 coins succeeds in bringing a burst of thunder and lucky strikes of lightning, thanks to the decent bonus features.

After making it through this storm, you’ll be glad to know there’s a sequel in store for you with the Thunderstruck II slot, both of which can be enjoyed at the best New Jersey online casinos and top Pennsylvania slot sites.

When forming the winning combinations, all symbols will pay from left to right, except for the Scatter Symbol which can pay from anywhere. Only the highest wins per line will be paid.

The low-paying symbols in the game will appear as playing cards with numbers and letters. Symbols at the high-paying end of the scale will appear as Nordic-themed objects, such as Thor’s Hammer, Castle, and horn.

Thor himself appears as the Wild Symbol and upon appearing will double payouts. Maximum payouts can reach as high as 10,000x the stake for this symbol. The Thor Wild can substitute for all symbols apart from the Scatter Symbol.

The Scatter Rams Symbol can trigger the Free Spins Feature when 3-5 symbols have been collected and winnings will be tripled as a result. Landing 5 symbols can release a payout of 1,350x.

How to Play the Thunderstruck Slot

The wager limits start from a minimum of 0.09 and increase to a maximum of 90.00 in the player's chosen currency. Once the player has selected their chosen wager, getting started is straightforward and simply requires a click on the Spin button which is located at the bottom right-hand corner of the screen. There is also an Autospin option for players who choose not to use the manual feature.

The Thunderstruck real money slot can be enjoyed across all smartphones, especially iPhone and Android devices, as well as laptops, desktops, and tablets, meaning the thrill of the game can be experienced anyhow and from anywhere at the newest online slot sites.

The Thunderstruck slot contains a Free Spins Feature, which will become activated as a result of collecting 3 Scatter Symbols. A Multiplier of x3 will be added for as long as the feature is active. There is also a Free Spins Bonus Round and Gamble feature that will double your winning potential.

This medium-volatility adventure features a default RTP of 96.10%. The maximum multiplier win is capped at 3,421x the player's wager. Want to experience the Thunderstruck slot for real money? Enter your favorite online slot site, choose the best payment method and let’s go!

The Thunderstruck slot is relatively simple in terms of how it has been designed and how it’s played. Some may view it as outdated, lacking the modern features to add the required dose of entertainment into the game. On the other hand, it can be a great choice for players who enjoy a minimalist slot, with some big win potential minus the vibrant themes or visual details.

The Scatter and Wild Symbols both prove rewarding if the correct amount is landed as part of the winning combination, transforming the game in its entirety, especially with regard to payouts and unlocking the bonus features, which are fairly limited even if rewarding within the game.

If the Thunderstruck slot has you in the mood to play a warrior alongside the Vikings of the past, then you may want to try Power of Thor Megaways by Pragmatic Play, where you’ll go head to head with the thunder god himself.

Who developed the Thunderstruck online slot?

The Thunderstruck video slot has been created by Microgaming – a premium online slot games provider, that has developed some great online slots like the Immortal Romance Mega Moolah progressive jackpot slot and the 9 Masks of Fire online slot.

Can I play the Thunderstruck slot for free?

You most certainly can play the Thunderstruck slot for free! Just log in to your chosen online casino and start spinning! However, UK players can’t play slots for free due to current regulations. Unless the UKGC ban on slot demos is lifted, it’ll remain so in the future.

Can I play the Thunderstruck slot game for real money?

Is Thunderstruck a Megaways slot?

Is there a jackpot on offer in the Thunderstruck slot?

Unfortunately, there is no fixed jackpot appearing within the Thunderstruck slot, however, the slot does offer some pretty cool bonus features that can be as equally as rewarding.

How do I get to the Free Spins Round in the Thunderstruck slot?

To activate the Free Spins Feature in Thunderstruck, you simply need to get your hands on a symbol combination of 3 or more Scatters.

How to win big in the Thunderstruck slot game?

Players with the winning mindset could just get their hands on the highest wins worth over 300,000 coins.

Can I play the Thunderstruck slot on my phone?

Yes, the Thunderstruck slot has been developed for use on mobiles, especially on Android and iOS devices.

What are the bonus features in the Thunderstruck slot?

The Thunderstruck slot has a Free Spins Feature which comes with additional Bonus Rounds, once the Free Spins have been activated.

Do I need to download the slot app first?