Since the story of a man brought up by apes was first released way back in 1912, numerous Tarzan books, films and TV shows have been released. Now it’s the turn ... Read Review 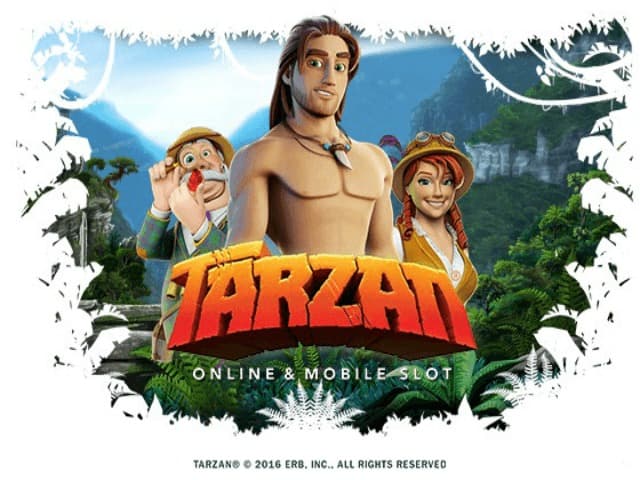 Since the story of a man brought up by apes was first released way back in 1912, numerous Tarzan books, films and TV shows have been released. Now it’s the turn of an online slot, with the Tarzan slot machine from Microgaming hitting casinos in 2016. It’s a five-reel, 40-line game where our heroic title character is joined by an explorer and the beautiful Jane, along with jungle fruits and exotic wildlife.

If you are a fan of the character and like the sound of a Tarzan slots game, we have good news. Instead of having to hack through the jungle to reach a land-based casino, we’ve found some online sites that carry this and the rest of the Microgaming range. Simply pick up your iOS or Android mobile, or switch on a PC, and start playing the Tarzan slot from wherever you happen to be.

Once loaded, you will find that Tarzan is just as thrilling as the original tale. The computer-generated graphics take you through to extra wins when the wild symbol appears in the right places, plus there is a wheel of fortune feature, which spins up any of three bonus rounds. Collect cash awards, enjoy some free spins with extra winning chances, or play a fun prize-picking round with some hippos.

With the potential to land some mega wins of up to 2,750x your stake, it’s no wonder the jungle drums have spread the message far and wide. It’s made the Tarzan online slot one of the top titles in the Microgaming library.

To make sure that Tarzan appeals to players with all bankrolls and skill levels, Microgaming have made this game very easy to play, but packed it with features. You only need 0.01 on each of the 40 paylines to get started and can raise your line bet to a maximum of 1.00. That gives a total bet range of 0.40 to 40.00 for each spin, which should encompass all but the smallest and largest of budgets.

Let Tarzan take control for up to 100 consecutive spins by activating the autoplay mode, or speed up this jungle adventure by choosing the fastplay option. The creative minds at Microgaming were in overdrive when they devised the Tarzan slot machine. It uses cartoon-style graphics to give it the appearance of an animated movie, with the reels set against a realistic backdrop of trees draped with vines in a steamy jungle.

Tarzan stands to the left side of the game, moving around a little as the reels spin. If you play this game on you iOS, or Android mobile, some of the background detail is lost, but it’s still a great-looking slot with high quality graphics.

Classic fruit machine symbols such as oranges and watermelons pay smaller prizes, while the tropical bird, a cheeky monkey, jaguar, explorer and Jane pay out more. If you want to preview the full details of what each symbol is worth, click the pays button to the side of the reels. Briefly, the lowest value symbol is worth between 4x and 40x your line bet, while at the other end of the scale, Tarzan pays out from 40x to 500x, depending on how much of a line each one fills.

This is a low to medium variance game, so you should collect a decent number of prizes as you spin the reels, even if average payouts are on the lower side. While land-based casinos need to rake in lots of cash from their customers to run the sites, online casinos don’t have such expensive real estate and can pay back a higher percentage of wagers. With the Tarzan online slot, there is a nice average payback percentage of 96%.

Although you win by landing matching symbols across a payline, starting from the left side, the game logo is wild, so can act as others if it’s able to create extra winning lines. It’s also worth a huge 800x your line bet when it fills a whole payline on its own.

A multi-colored wheel of fortune is a very lucrative scatter symbol, worth 40x, 400x and a massive 4,000x your total bet when seen in any 3, 4, or 5 places at once. Spin the wheel to trigger any of the three exciting features.

A free spins bonus round plays out over 12 spins, but during these a Rolling Reels feature sees winning symbols vanish and new ones drop into the empty spaces. It can lead to win after win if this creates new combinations. On top of this, wild symbols expand by 1 row for each spin, with luck, filling the reels with valuable wilds by the end of the round.

In the Pick-A-Potamus feature, you win cash as you click on any of the 12 hippos wallowing in the river. Keep clicking until one goes Pop!, and ends the round. The last option is an instant cash award and while it’s not so much fun, you won’t mind, as the prizes can be up to 1,000x the stake.

If you're in the market for a different type of slots bonus, why not avail of a No Deposit Bonus from one of our trusted online casinos?

It doesn’t really matter whether you are a Tarzan fan or not, as this game is certain to delight anyone looking for a cool, adventure-themed online slot. The superb graphics could be a little cartoonish for some, in which case try the Heart of the Jungle slot from Playtech, which has realistic symbols.

The combination of sharp images, fun animations and multiple bonus rounds have kept the Tarzan slot machine form Microgaming as king of the virtual jungle for several years. Swing on over to our top Pennsylvania online casino sites and the best New Jersey online casinos and mobile sites, where bonus funds and free games await collection.