The popularity of NetEnt’s huge hit Starburst has extended far beyond the studio’s catalogue. It inspired many to follow its example and deliver their own version of a low volatile slot game ... Read Review 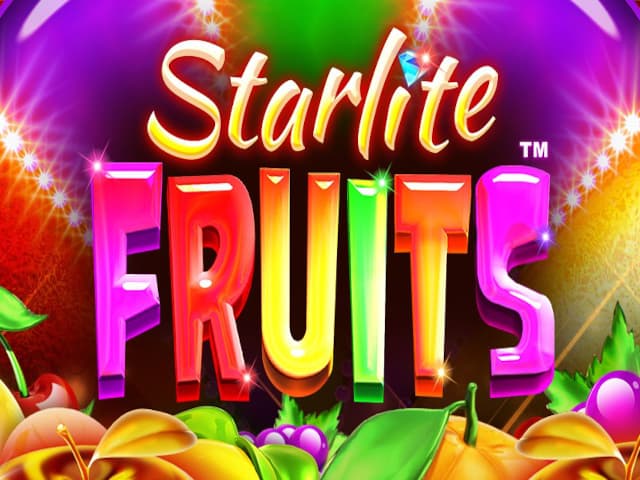 The popularity of NetEnt’s huge hit Starburst has extended far beyond the studio’s catalogue. It inspired many to follow its example and deliver their own version of a low volatile slot game that seemingly doesn’t have many features but pays well. Neon Valley Studios and Microgaming have collaborated on a Starburst-like game called Starlite Fruits that ups the volatility a bit while retaining some of the original’s best features.

It has an RTP of 96% paired with 10 paylines that pay in both directions. What makes it different than all other Starburst clones? Well, it’s not blatantly copying the performance of the Wilds. Instead, it adds its own stamp with neon-bright fruits and four fixed jackpots in tow.

Starlite Fruits does the name justice. It truly does pay starry sums of money and shines starlight all over the luckiest players. The 2,500x winning potential may not be the highest, but for a medium volatility slot with fruits, stars, and BARs, it’s pretty great.

Starlite Fruits’ name gives off the impression of a vintage slot machine, and you wouldn’t be wrong to think that. It’s a 5x3 slot machine with neon-designed fruits and a touch of gold. The 5x3 grid is slight to the right, with the left side of the slot reserved for the jackpots.

On the reels, you’ll see various fruits as befits a classic slot game and BARs. They are divided between low-win symbols and premiums, with the top ones paying 25x the bet. Star Wilds work similarly to the original Starburst Wilds. They appear on reels 2, 3, and 4, and expand to cover the reel. Respins occur for each Star Wild, with up to 3 possible consecutively.

While it is a Starburst-inspired game, it doesn’t rip off the visuals. This one is based on stars and fruits instead of space gems. Visually and in terms of audio, the slot is nothing short of amazing, just like most Microgaming slots.

If you prefer to play from your phone, Starlite Fruits is available on Android and iOS devices. It was developed on the HTML5 platform, so no need to download slot apps to play it. You can just do it from a mobile browser.

Set a wager between $0.10 and $100 and hit the Play button to start. The action in Starlite Fruits revolves around the Star Wilds. They step in to complete winning combinations and they expand over a reel. Each Star Wild triggers a respin, and every time a new one lands, you get another. Up to 3 consecutive respins are possible, and due to the fact that the paylines pay both ways, this is a very rewarding feature.

The Wilds appear on the middle reels only, so you get a pretty big respins/expanded Wilds area. This is the Starburst mechanic on full display, but this time it involves stars instead of those gems.

Some of the symbols that land on the reels will have a diamond icon over them. These are collected in a special Jackpot Meter. You can see the payouts on the left side of the slot. Every diamond icon triggers a possible spin on the Jackpot Wheel. Here’s what the jackpots pay:

There is no Free Spins Round in the Starlite Fruits slot. True to the original, the Bonus Respins play in the base game, with no separate Bonus Round. Still, it’s a pretty great feature if you ask us that can be triggered often thanks to the medium volatility.

Keep the respins going for a long time and you’ll get pretty decent payouts from it all.

The RTP of the Starlite Fruits is set to 96%. It’s perfect for a medium volatility slot. With a bit of luck and those Wild Respins, you can win a maximum of 2,500x the bet.

Starlite Fruits gives the Starburst mechanic a vintage fruity tour. It’s dressed in neon with fruits that look great and feature the iconic Wild Expanding feature that can deliver shiny diamond wins. There’s not much going when it comes to the Bonus Round, but the Star Wild respins are more than enough to keep you spinning and hopefully winning at the top New Jersey online slot sites and recommended Pennsylvania online casinos.

Who created the Starlite Fruits slot?

The Starlite Fruits slot was developed by Neon Valley and released on Microgaming’s platform. The two studios have worked with each other before. Their biggest hits come in the WowPot series, more specifically Queen of Alexandria. Other slots by Neon Valley include Aurora Wilds and Atlantean Treasures Mega Moolah.

What’s the minimum wager I can place in Starlite Fruits?

The minimum wager you can place on the Starlite Fruits slot is $0.10. That’s a wager anyone can afford. Whether you’re a new player or you want to try and use a strategy, a wager of $0.10 won’t break the bank and will give you a nice overview of the slot’s features.

No, it isn’t. Starlite Fruits’ volatility is straight down the middle of the road. It pays solid and often, but don’t expect it to match Starburst’s legendary low volatility. Still, you can expect varied wins thanks to the 10 bothway paylines.

The RTP is flat at 96%. This is perfect for a medium variance slot game. The Star Wilds can give you decent payouts when they land on the middle reels. They expand to cover each one while triggering up to 3 respins in a row for great winning potential.

How do I win the jackpot in the Starlite Fruits online slot?

You can see the fixed jackpot payouts if you look to the left. Every symbol on the reels can land with a small diamond icon on it. These diamonds are collected and may trigger a spin on the jackpot wheel. There are four to win, with the largest one, Mega, paying 2,500x.

Is there a Free Spins Bonus in Starlite Fruits?

Unfortunately, there’s no Free Spins Round in Starlite Fruits. The bonus action largely focuses on the Expanding Wild respins that can occur in the base game. While it’s not the same as a Bonus Round, you can land them pretty often and up to 3 in a row.

What symbols are there on the reels of the Starlite Fruits slot?

The Starlite Fruits slot has symbols divided between premiums and low-win symbols. They represent old-school fruits clad in neon and gold. You’ll see lemons, watermelons, and cherries on the reels along with stars, Star Wilds, and the legendary BARs.

How do I trigger the Expanding Wild respins in Starlite Fruits?

You don’t. This is a random feature triggered every time a Wild Symbol lands. This only happens on the middle reels. When the Star Wild lands, it expands to cover the reel and gives you a respin. You can get up to 3 respins in a row.

Which slots are similar to Starlite Fruits?

The original Starburst from NetEnt is the one that the Starlite Fruits slot obviously tries to imitate. Other slots that bear close resemblance are Aurora Wilds by Neon Valley and Noble Sky by the same studio. Any slot with a similar Expanding Wilds feature will bear a resemblance.

When was the Starlite Fruits online slot released?