A shuriken, as our research for this slot revealed, is the correct name for the little throwing stars that are used in martial arts movies. You live, you learn. These weapons take ... Read Full Review 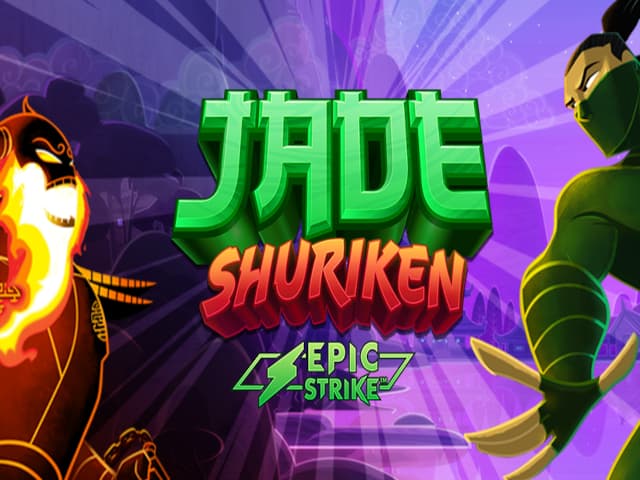 A shuriken, as our research for this slot revealed, is the correct name for the little throwing stars that are used in martial arts movies. You live, you learn. These weapons take center stage in a colorful, cartoon-style slot game from the team at Slingshot Studios. The Jade Shuriken slot whisks players away into the Japanese mountains, inviting them to spin the reels at the best Pennsylvania online casinos and top New Jersey online slot sites and see what they have in store. Let’s suit up for battle and find out what is on offer in this Jade Shuriken slot review.

As we mentioned in this Jade Shuriken review intro, the slot adopts a cartoon style, and it’s one that lends itself really nicely to the theme. Fans of anime, and especially cartoons like Samurai Jack, will really enjoy the visual approach that Slingshot Studios has decided to take here. A calm, Japanese-style soundtrack plays as you hit the spin button, and the slot is also brought to life with some awesome animated sequences that play at certain moments in the game.

How to Play Jade Shuriken Slot

Mastering ancient martial arts is an extremely difficult and time-consuming task. Don’t worry though, Slingshot Studios have made sure that it takes no time at all to master spinning the reels here. Like most top online slots, the game unfolds over five reels. There are four positions on each of these reels, allowing the slot to offer 40 fixed paylines on each spin.

Adjusting the stake is done by hitting the burger menu icon above the spin button. The minimum wager is $0.20, and the maximum is $0.80 when you are playing Jade Shuriken for real money. Autoplay and turbo options also exist, though, the latter may not be available in all territories.

Ancient Samurais didn’t have access to mobile phones or tablets. This is a shame because if they did, they would have been able to take Jade Shuriken for a spin. The slot can be played on various devices and operating systems, and with most top online casinos offering iPhone slots and Android slots, it shouldn’t be too difficult to find. The mobile version plays in the same way as the desktop, with the cartoon-like color scheme and design popping off the smaller screens nicely.

The two shurikens will only appear on reels 2, 3, and 4, and each of them will trigger a different bonus. Three green ones will trigger the Epic Strike bonus. For this, players are simply given a payout for the number of shurikens on the reels. This is similar to the iconic 9 Masks of Fire where players are paid out for landing a number of Mask symbols. The biggest payout here is 2,500x the player’s stake if they land 12 green shurikens.

The golden shurikens will trigger the Epic Strike Respins bonus. Three shurikens trigger the feature, and all triggering symbols are held. The two end reels are closed off, and the middle reels respin. If another symbol lands, another respin is rewarded. All symbols are added together and payout according to the table on the left-hand side of the reels at the end of the round.

While it might have quite a high-octane theme, Jade Shuriken is actually quite a tame slot game beneath the flying weapons and stealthy ninjas. The maximum win available in the slot is scored in the Epic Strike and Epic Strike Respins bonus and is 2,500x the player’s overall stake. The game is medium volatility, though, this is slightly altered depending on the Bonus Spins Round that is chosen. The RTP for the slot is above average 96.24%.

Jade Shuriken may not be Slingshot Studios’ most advanced slot game, but it is a fun little outing with a colorful theme and some engaging bonus features. The maximum win feels in reach when you play the slot for real money, and the medium volatility means that you do see the bonus rounds trigger quite often. While it won’t win any prizes for originality or winning potential, Jade Shuriken is a nice little genre piece that should please fans who like this type of slot.

Who made the Jade Shuriken online slot game?

The Jade Shuriken online slot game was developed and designed by Slingshot Studios. The game is being released and distributed by Games Global. Games Global is one of the biggest names in the iGaming industry.

Are there any Free Spins in Jade Shuriken?

How much can I wager in Jade Shuriken?

The Jade Shuriken slot game can be played for wagers between $0.20 and $80. This is a fairly average wagering range that should accommodate most budgets. To adjust the stake, players will need to click on the Burger menu and then use the +/- buttons to do so.

Can I play Jade Shuriken for free?

Yes. However, there are some exceptions. Jade Shuriken can be played in a demo format in most locations. Some countries, however, will not allow players to play the Jade Shuriken online slot for free as a result of government legislation.

Is there a Jade Shuriken Jackpot?

No. There is no jackpot, fixed or progressive, that can be won in the Jade Shuriken slot game. However, players can net themselves a maximum potential win of 4,500x their overall stake. The slot does not make it clear exactly how this is won.

What other slots are like the Jade Shuriken slot?

There are many online slot machines that use a similar ninja-style theme for inspiration. From a gameplay perspective, the 9 Masks of Fire online slot by Microgaming is an easy comparison. The two online slots share a similar bonus feature.

How much can I win playing Jade Shuriken?

The biggest win that can be secured in the Jade Shuriken slot game is 2,500x the player’s stake. This is won through the Epic Strike or Epic Striker respin bonus. The slot is considered medium volatility, meaning players may be able to land smaller wins on a more regular basis when they play.

What is the RTP of Jade Shuriken?

The return to player of the Jade Shuriken slot is 96.24%. This puts the slot above the industry average of 96%.

When was the Jade Shuriken slot released?

Jade Shuriken was released on September 6th, 2022. The slot is available at a wide range of top online casinos. To find a casino that will meet your needs, you can check out our detailed online casino reviews elsewhere on the site.