Developed for Microgaming by Northern Lights Gaming, Golden Stallion is a brand-new slot with fun gameplay and galloping rewards. The concept behind the slot is pretty solid. It pl... Read Full Review 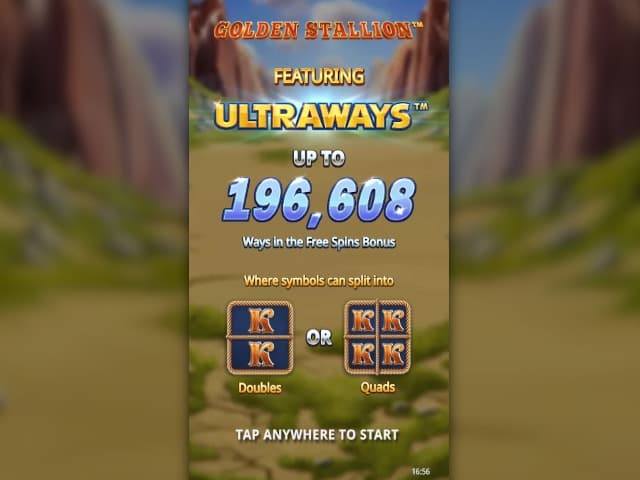 Developed for Microgaming by Northern Lights Gaming, Golden Stallion is a brand-new slot with fun gameplay and galloping rewards. The concept behind the slot is pretty solid. It plays in a canyon touched by the sun, with golden features and galloping horses rushing to shell out a pretty coin.

The Golden Stallion slot comes with several great features in a fun package. While there’s not a lot of special stuff in the base game, the slot definitely shines in the bonus round which can be quite lucrative. It’s a slot that’s well worth your time and money thanks to the fun gameplay and an easy-to-use interface suitable for new and seasoned players alike.

If you’re lucky and you hit the right symbols and features, this golden stallion will gallop into the sunset and bring you a bag of shiny coins.

Golden Stallion is a Western-themed slot set in a sun-glazed field. Northern Lights has done a solid job with the graphics, even if the slot doesn’t boast the 3D graphics we’re used to in 2021. It looks pretty solid with all those colors and the simple reel frame gives it a bit of retro authenticity.

As the name suggests, the western slot is all about stallions. Beautiful horses grace the reels along with a sheriff, golden wilds, and stylized card royals. Each spin during the base game in the Golden Stallion slot is part of a unique Golden Spin cycle. The symbols pay differently in the base and bonus game. During the Golden Spins, the two glamorous horses pay 6x for five-of-a-kind. When you get to the Ultraways bonus round, they pay less, but the number of symbols is doubled.

The graphics are paired with western-themed audio that completes the picture. Northern Lights’ first Microgaming collaboration is a pretty good-looking affair. We especially like the soundtrack which really puts you in a western mood.

Microgaming always develops mobile-focused slots and Golden Stallion is no exception. The slot is available on all types of mobile devices including new and older Android and iOS devices at recommended New Jersey online casinos and top Pennsylvania online casinos. It is available on instant-play platforms so there’s no need to download an app to play it.

To start the game, you’ll need to place a bet first. You can place a bet that goes as low as 0.10 coins or as high as 50.00. Spin the reels to start the action, and a pop-up window will tell you how many spins you’re away from the Golden Spins cycle.

During the base game, a stallion might gallop across the field and hit the reels. This will frame a random symbol on that reel in a green border which plays a role later. When the Golden Spins countdown reaches 0, all those framed symbols will turn into mystery symbols. A random matching symbol is then selected – it can be either the regular symbols or a golden version of it. The latter are worth much more. Land those during the Golden Spin cycle, and you could be in for some pretty nice payouts.

Landing at least three scatters on reels 1, 3, and 5 simultaneously will get you to the Ultraways bonus round. It’s essentially a free spins round with 10 extra spins. Before it begins, a Horseshoe bonus game determines the number of spins you get during the feature. The maximum is 196,608 which is more than any other Megaways slot.

The free spins round splits regular symbols to doubles or quads. This means that they now count as 2 or 4. The splitting mechanic means smaller payouts, but thanks to the Ultraways, the slot reaches its true winning potential during this round.

The Golden Stallion slot’s RTP is set at a solid 96.17%. It’s a highly volatile game but rarely feels like it thanks to the slew of special features. During the bonus round, you can earn up to 6,000x your stake which isn’t bad.

Golden Stallion is a simple, yet fun slot that will delight western fans. It’s very easy to play and has a few excellent special features that can make you a great winner. The Golden Spins cycle and the special bonus round will make sure of it thanks to the green frames and bonus Ultraways engine which can pay up to 6,000 times your stake.

Play Golden Stallion for a real money ride now and ride off into the sunset with a bag of golden coins.